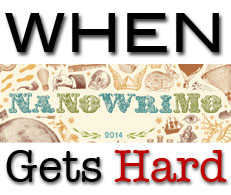 It’s my sixth year participating in . Every year there’s more at stake in National Novel Writing Month (NaNoWriMo). I’ve had five consecutive victories, and I don’t want the winning streak to end. As I write this, it’s the morning of November 16th. This is the all-important halfway point of NaNoWriMo. Just over two weeks in.

This is where, in my experience, it gets really, really hard. That novel idea, so unique and fresh in the beginning of the month, now seems to fall flat. It’s less exciting. Where did all of that potential go? Virtually everyone who tries to write a 50,000 word novel in one month hits this point. It might be now, it might be November 25th. 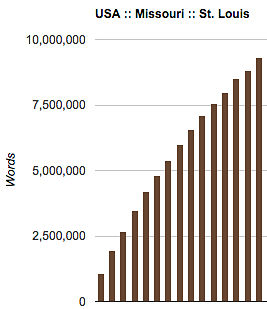 The evidence is written clearly in the regional word count tracker, which charts the total words logged by everyone in my region (St. Louis, Missouri). We started out really strong: 1.05 million words on the very first day. If everyone kept that pace, we should be at 15 million words today.

That’s evidence of two things, really: people not hitting the necessary word counts, and people dropping out altogether. The first one is expected, but the second one is what makes me sad. It reminds me that the success rate for NaNoWriMo is about 15%.

Last year, I wrote about how NaNoWriMo is like becoming a writer. Here’s what you need to make it:

The writing does NOT need to be perfect at this point. This is drafting, and if you spend time going back to edit, you risk not reaching the endpoint.

NaNoWriMo, and novel-writing in general, is not for everyone. When I invite some friends to join me in NaNoWriMo, many of them (even in mid-October) are already making their excuses. There’s that family trip or that big work project or an important school assignment. Even if they agree, they warn me that they’re planning to fail.

I smile and nod when I hear this, because I’m hearing something I can’t do anything about: you don’t want it enough.

Look, we all agree that November isn’t the best month for NaNoWriMo. It’s only 30 days long, for one thing, and in the U.S. we have a major holiday that’s now (unfortunately) overshadowed with ever-more-desperate retailers. But you can make excuses for any month. My feeling is that you might as well do it when thousands of other writers will be trying too. You can’t half-ass this thing.

There are two kinds of support that writers need to find success. First and foremost, writers need the support of their families. Especially the many writers who have little kids, because that’s a lot of responsibility. If your spouse is against you from the start, it manifests in a hundred different ways. You get those guilt-inducing sighs, those little snarky complaints, and you start to feel bad whenever you’re writing. You aren’t going to be as attentive, or as handy, or as helpful during NaNoWriMo. That has to be okay.

Second, and also important, you need a network of friends who are writers. Ideally, ones who are doing NaNoWriMo as well. These people get it. They understand what it takes to write a novel. Together, you can:

I’m lucky this year, because I buddied up with some neo-pro writing friends. People who have books published and literary representation, or who are close to that point. They are giving me some serious competition! I have no doubt that it’s due to their experience, and their level of commitment. Wonder of wonders, I’m still on pace:

I admit that part of this is because I’m an old hand, and I did about 10 things to prepare for NaNoWriMo. I even drew up a somewhat-detailed outline, which (as an avowed panstser) I never thought I could do.  But most of it is because of my supportive family and kickass writing friends. This one’s for you, guys!