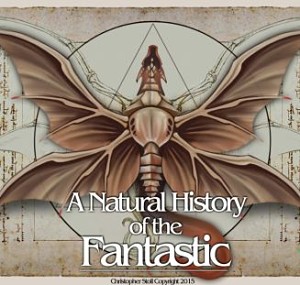 As you may have gleaned from the Science in Sci-fi, Fact in Fantasy series, I’m keenly interested in books with speculative scientific or fantastic elements. Naturally, I was quite taken when I heard about an illustrated compendium, A Natural History of the Fantastic, that seeks to combine the two. It’s the literary equivalent of what would happen if a biologist and a humanities professor had a baby.

Today, I’m thrilled to talk with Christopher Stoll, the talented artist behind this project. He’s graciously agreed to let me share some of the art that’s in the compendium as well.

Dan: Let’s start with a softball question. What motivated you to undertake this project?

Chris: I’ve always had a dual love of science and fantasy, but “biology” has always been a kind of secret dirty word in my favorite fictional worlds. Very few stories imagined, realistically, the lifecycle of dragons or devils, how they fit into their ecosystems, or how they evolved their abilities. 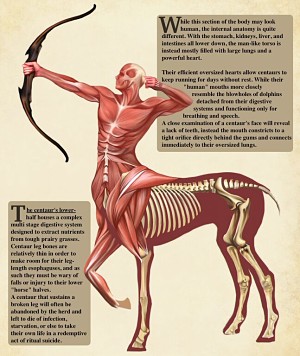 There is seldom a reason for writing about science in fantasy with anything more than a “don’t think about it” hand wave, and even the more coherent fantasy spaces are always filled with impossible creatures from multiple myths.

Though these thoughts had always been at the back of my mind, the inspiration to begin this book came while fighting alongside friends in an all night D&D session. A dragon had swooped down on the villagers we were charged to protect and after a fierce battle one of our party stuck a sword in the fictional beast. That would have been the end of it, but I couldn’t help but asking “Wait, how did it die?”

Dan: My guess would be Bard, in the village, with the black arrow.

I had never needed to think of dragons as more than in-game concepts designed to take damage and then disappear, so imagining that beneath their armored skin there must be a muscles, organs, and bone was a revelation. My friends and I spent the rest of the night with our dice untouched, discussing the possibilities. How do dragons fly? What could some of these creatures possibly be related to? Are there subspecies? Distant relatives? Extinct ancestors?

Can mermaids, goblins, and dragons really fit together in a believable web of natural interactions? 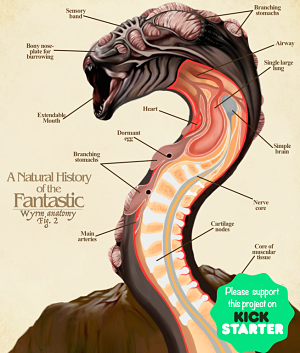 Natural history of the fantastic Wyrm

It was then that I began building a realistic taxonomy, imaging the science of dragons and the ecosystems that hold them. After years of independent study and intermittent sketching I had constructed a mostly coherent biological history for these creatures that became the first draft of A Natural History of the Fantastic.

Dan: How did you choose which creatures to include? It seems like there are so many possibilities.

Chris: Basically I start with whichever creatures interested me the most. If it captures my imagination then I start sketching.

There are, of course, some mythical creatures so “magical” that they can’t easily be added to a collection like this, ghosts and genies come to mind. But I usually try to approach each myth that catches my attention and to create a basic blueprint for how it might move, feed, breed, and survive. After this brief conceptual stage I can decide if the creature is worth continuing to “flesh out”, and ultimately if it will be included in the collection.

Dan: All right, I’ve got to know something: what media did you use to create the art?

Almost all of the art for the project was finger-painted on an iPad.

I don’t have room for larger equipment in my small Japanese apartment, and I need mobility as I travel for work.

The process typically began as pencil sketches which I would photograph directly with the iPad and import into a program called “Proceate”. 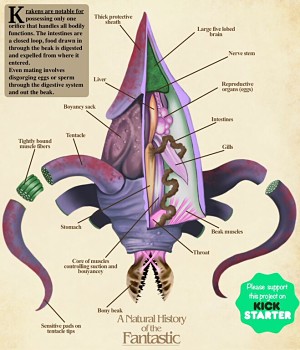 Then I could just paint over the sketches and expand on them layer by layer until I had a creature that felt real. This process could take months, and I would often work on several creatures simultaneously.

Dan: What was your favorite creature to draw? Which was the hardest?

Chris: My favorite creatures to draw were definitely the wyrms and dragons. I’ve always had a love for dragons, and getting to design their flight organs and internal anatomy was a challenge I enjoyed every step of the way.

On the other hand, anything that incorporated human anatomy was tricky- the centaur, mermaids, and minotaur spring to mind.

When I was designing a dragon I could take certain liberties with its internal anatomy, but once structures analogous to humanity were at play I had to be careful about arranging the muscles and organs believably. It was never not a joy to draw them, but it was much more difficult to make a centaur into something the audience would accept as realistic than it was with more fanciful creatures like giant fire-breathing reptiles.

Dan: Tell me about the research you did to develop the mythology.

Chris: Initially I thought I might set the book as a paleontological journal that showed step by step that these creatures DID at one time exist and were a part of Earth’s long and varied evolutionary history. So I began with research on dinosaurs, studying their natural history as well as methods of reconstruction and excavation. When I decided to scrap this idea and instead create living versions of the creatures I suddenly needed a more specific profile on each creature, and I switched my attention to texts on evolution and anatomy. 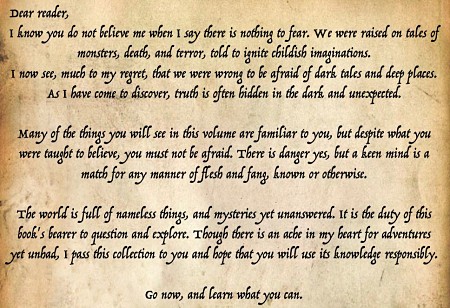 In some cases the research was extremely esoteric, like studying the necessary neck-length to body ratio for a bird to take breaths while in flight. Other times it was broader, more related to the arrangement of muscles along a particular creature’s back or the daily amount of food necessary for an elephant sized creature to remain active.

Dan: So, you just launched a Kickstarter campaign. How much of the project is done already, and what’s left?

Chris: The book is currently 80% complete with the remaining work consisting of text formatting, layout, and a handful of unfinished pieces. I intend to have most of this finished by the end of the funding period. There are a few stretch goals that involve creating new content, but I have a squirreled-away collection of unused concepts, research, and creatures blueprints that can be incorporated into the book’s world with only a few extra pieces of art.

Dan: Good luck! I really can’t wait to see this book in print.

Chris Stoll is a lifelong lover of fantasy and science fiction. He currently lives in Fukuoka Japan, and when he isn’t painting he spends his time teaching at a small English school. You can find him on DeviantArt and Twitter.