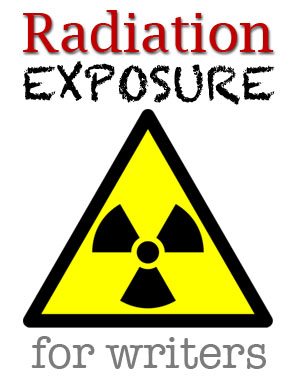 This article on nuclear radiation for writers is part of the Science in Sci-fi, Fact in Fantasy blog series. Each week, we tackle one of the scientific or technological concepts pervasive in sci-fi (space travel, genetic engineering, artificial intelligence, etc.) with input from an expert. Please join the mailing list to be notified every time new content is posted.

Today’s expert is nuclear chemist Rebecca Enzor. Rebecca has a BS in biology and chemistry and has spent the last eleven years working as a nuclear chemist at an environmental testing laboratory. She writes novels on sticky notes while dodging explosions in the lab. Her debut novel SPEAK THE OCEAN will be published by Reuts in Fall 2018. You can read more about her obsession with science (and My Little Ponies) at her website or in her Twitter feed.

Thank you for welcoming me back, Dan! I’m an analytical chemist who tests for nuclear radiation, herbicides, pesticides, and PCBs in liquid, soil, vegetation and tissue samples. Last time I was here I talked about Proper Lab Technique, which is something people usually get half right (lab coats/glasses/gloves) and half wrong (don’t tip pipettes upside down!). Today I’m talking about something that’s always in the public conscience but often misunderstood: Nuclear Radiation.

First thing’s first: what’s nuclear radiation? RADIATION itself is the process of energy transfer through space or material, like heat or sound or light. Radiation itself can mean cooking food…or cooking skin into a sunburn. NUCLEAR RADIATION means there are actual physical particles, although they’re too small to see, moving through space/material. It’s harmless until it starts moving through your material.

There are different types of nuclear radiation: alpha, beta and gamma. Alpha particles are big, and do the most damage, but your skin can stop them. Beta particles are medium sized and do significant damage, but can be stopped by clothing. Gamma particles are so small that they don’t do as much damage unless there are a lot of them, and they’ll go through just about anything.

Exposure to Radiation: The Fence Analogy

My favorite analogy for radiation exposure is a fence. Gamma rays are a laser-toy – gamma-radiation (in wavelength form) will get through your fence no problem, but it’s so tiny it won’t do much damage unless there’s a lot of it.

Beta radiation is a ping-pong ball – there’s a chance it’ll get through, but when it does it’s still small enough that it won’t do that much damage. Enough to be worried about, sure, but it is easily stopped by plastics or wood. If it gets into a cut or ingested, that’s not good.

Alpha radiation is a basketball – it’s not getting through the fence unless there’s a hole. A cut or scrape will let it in (we’re still working on molecular level here), but it’s more likely to be ingested or breathed in. These guys are “easy” to keep out, but BAD NEWS if they get in. If you have a hole in your fence big enough for a basketball to get through…everything in that path is getting hit with that basketball.

In this analogy, getting hit with the basketball, ping-pong ball, or laser-toy, means you’ve just become the victim of radiation poisoning.

Radiation Exposure May Not Kill

Seriously guys, the sun is blasting us with radiation every day. That’s why skin cancer is a problem. But you have to take into account where your radioactive contamination is coming from (which type it is), how large the dose is, and how far from it you are.

Nuclear radiation poisoning is exponential – if you’re closer you’re going to get a lot more than if you take a few steps back. If you spill a radioactive sample and leave the room? You’re probably going to be safe. If you spill that sample and bend down to clean it up by hand? Good luck if you don’t have proper PPE (see my previous post on Proper Lab Technique).

Using Nuclear Radiation As A Weapon

This is possible. It’s actually, literally, in-this-world possible. BUT it’s not easy, and OH YEAH every radioactive material you use can be linked back to the source lab it came from.

If you try to poison someone with Polonium-210, like that former KGB officer in 2006, the exact “standard” you used can be traced back to the lab it came from. My laboratory had a meeting about it after that happened. You can trace every single bit of Polonium, Cesium, etc. back to the lab that it came from, because they all have unique signatures, and you usually can’t get enough of it outside of these sources to kill someone.

So, if you fictionally kill someone with nuclear radiation, it’s searchable. If your antagonist wants to poison someone this way, they need to have a really good alibi for how they couldn’t possibly be the one who stole it.

Nuclear radiation doesn’t make you drop dead unless you’re in the path of a nuclear explosion/meltdown. You won’t have a poisoned bowl of soup and neatly drop dead in a park (I saw this on a show once and never watched that show again). Nuclear radiation isn’t that fast, except in explosive form.

If you ingest radiation through either a cut in your skin, your digestive system, or respiratory system, it will take a while to damage your organs.

Let’s say your antagonist used an alpha-emitter because it’ll do the most damage. They have to get the protagonist to ingest it by poisoning their food/drink, introduce it into a cut/abrasion, or get the protagonist to breathe it in by spraying it in their face. If your protagonist is sprayed in the face or splashed, they’ll want to get under a faucet immediately to wash as much of the external contamination off as possible. If they don’t, there’s a good chance they’ll breathe in even more, or rub it into a small cut or abrasion and further contaminate themselves. If they ingest it in their food/drink, they’re screwed.

As soon as your protagonist has been contaminated, the radioactive isotopes are going to start crashing into their DNA, ripping it apart, but that doesn’t mean they’ll feel ill immediately. The first signs of internal contamination will be nausea and vomiting, headaches, and eventually disorientation. Depending on the dose of contamination, this could take from a couple hours to a day to develop. The larger the dose, the faster the symptoms.

If the protagonist isn’t treated for contamination (or doesn’t know they’ve been irradiated) they’ll begin to feel considerably weak within a few days, and will experience what people think of as the classic signs of radiation poisoning (hair loss, bloody diarrhea, wounds that won’t heal) between a week to a month after exposure.

If your protagonist knows they’ve been poisoned, there are a couple things they can do. First, they need to figure out what type of radiation poisoning it was, because different types come with different treatments. Potassium iodide will help with radioactive iodine contamination, Radiogardase binds to cesium and thallium, and DTPA binds to metals like plutonium, americium, and curium. If your protagonist doesn’t know what type of radiation poisoning they’ve received, they may be given a combination of these things. They’ll also most likely receive blood transfusions to help damaged bone marrow, and antibiotics to combat secondary infections related to the destruction of tissues inside the body. They’ll also be more likely to develop certain cancers, even after treatment, so they’ll be tested regularly for those.

While I haven’t come across many books/shows/movies that use radiation poisoning, I recently read LEVIATHAN WAKES by James S.A. Corey, which you may also recognize as the popular SyFy show THE EXPANSE. I don’t want to spoil either the book or show for you, so I’ll just tell you to go read/watch it and know that they got radiation poisoning right.

From the people suffering from critically high doses, to the characters who received a much smaller dose, the symptoms and timeline were done well. I highly recommend both the book and the show.