As I write this, quiet battles are raging. Behind the cloak of secrecy, armed with desperate e-mails, Pitch Wars mentors who both fell in love with the same project are fighting to make it theirs. This is one of those rare reversals of power that happen in publishing, not unlike when multiple agents fight to sign the same author (except there’s no money at stake here, because Pitch Wars mentors are volunteers).

By the time you read this, however, that will all be settled. Decisions made. Hearts broken. Old news. Before long, the 160-or-so lucky writers who’ve been selected for Pitch Wars will get some fantastic news. Unfortunately, that also means that around 2,975 others will see their hopes dashed.

Rejection is a regrettable but routine part of the publishing industry. This might seem like a crushing blow, but it pales in comparison to the moment a dream publisher says no to the book of your heart. Remember that this is just a contest, and the people making decisions — the mentors — are fellow authors. Not publishing professionals.

That being said, I thought I’d share some thoughts on submissions Mike and I received, as well as our selection process. We will not be giving out personalized feedback, so I hope you’ll find this useful.

Some 197 writers submitted to the Koboldt/Mammay DreamTeam, for which we are sincerely grateful. The truly fantastic part was that nearly all of our submissions fit one of the genres we were looking for. Because genre is a free-text field, a lot of entrants took liberties (we had 34 unique genre tags).

When I assign them to broader (realistic) genres, sci-fi was the most common genre (44%), followed by fantasy (40%). We also received SF/F thrillers (8%) and a smattering of projects where the authors tried to call something both science fiction and fantasy (6%). Overall, 98% of submissions technically fit our wish list, so bravo.

Now, let’s talk word count. The optimal range for adult SF/F is probably 80-110k, with a sweet spot at maybe 85-90k. I’m on record saying as much. What a pleasure it was to see this distribution plot:

Granted, we still got at least 20 submissions that were over 130k. Frankly, that’s pushing it for this contest. Yes, epic fantasy and space opera can run long, but we’re dealing with a tight revision window for the contest. And I can’t ignore the fact that a 130k manuscript is 30% more work than a 100k manuscript.

We still read them, because we’re nice guys and we know that it’s not always easy to hit the right word count. But we didn’t read anything over 200k. That’s never going to happen. Nor did we read anything that wouldn’t win NaNoWriMo (<50k).

I read over 100 queries, which once again gave me incredible empathy for agents who do this as a job. The quality of a query varied widely. Some things I saw a lot:

Overall, the query was absolutely an area where most entrants could stand some improvement. Especially because it’s easy to swap queries with fellow authors and get feedback.

As Mike outlined in a post to his e-mail followers, we divided the workload: I took odd-numbered submissions, and he took even-numbered ones. For each entry, we rated the writing and the premise on a scale of 0 to 5. We kicked the projects that showed promise to the other guy, so both of us scored over 100 submissions. Here are the score distributions:

Distribution of scores given across submissions.

You can see that Mike tends to give slightly higher writing scores than I do, but both of us scored in a nice bell curve.

Here’s a partial list of common issues I encountered in the writing samples:

In spite of many common issues, Mike and I both felt that the overall quality of writing this year was a record high. At least 50 of our submissions got a writing score of 3 or higher. Well done, everyone. As for our soon-to-be-official mentee: the submission was an even number, so Mike read it first. We both gave it scores of 4 or higher in both categories.

The premise scores look a little different because I’m picky. I assessed the premise using three pieces of information:

The reason my scores trend lower here is that I didn’t give a submission a high score for premise if the writing wasn’t strong enough for us to take it on. Premise is probably the wrong word. It’s basically my excitement level about the project based on what I know about its subject matter, plot, and characters.

If it was an urban fantasy, for example, my excitement level was low. I just don’t read enough of that genre to feel comfortable mentoring one. Especially when there are kickass folks like J.C. Nelson on the mentor roster. 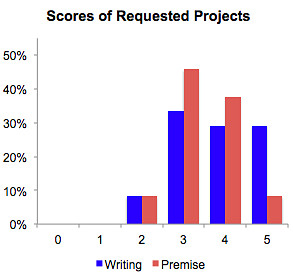 We ultimately requested 19 projects out of 197, which is just under 10%. Eleven sci-fi, eight fantasy. As you might guess, we picked from the high end of the score spectrum. I plotted the score distribution to the left, and didn’t distinguish between my score or Mike’s because they were usually comparable.

Bottom line, we primarily requested projects based on the strength of the writing, as long as the premise had some appeal. Sometimes, the writing was borderline but we just had to know where the story goes. That’s what a good chapter 1 does, whether it’s an agent or an editor or a casual book browser reading: it makes them want more.

When we made a request, we asked the author for a few things:

If we already had an inkling of what revisions might be necessary (i.e. cutting 20%), we asked about that, too.

The responses to our requests were fascinating. We enjoyed learning about the writing journey and personal story of these authors. That being said, this is also where most of the projects fell apart. Some of the common reasons:

Most of our requested projects had some query history. A few had been queried extensively. It’s hard not to see this as a disadvantage: although many agents will take another look at a MSS that’s been through Pitch Wars, the concept novelty is gone. And agents, unlike Mike and me, are publishing professionals. Some of these authors need to go write another book.

There Can Only Be One

There were many worthy projects submitted to us this year. We can only pick one (0.5%). That’s a shame, because there are so many that we could help.

I hope that every author who entered, regardless of the outcome, will keep writing and continue working on craft. Find critique partners. Start a new book. We want to get your submission again next year, and we can’t wait to see how much you’ve grown.