Yesterday I participated in a lively Twitter event called #PitMad, in which aspiring authors pitch their completed manuscripts in 140 characters or less. From 8 a.m. to 8 p.m., participants would tweet their pitches using the #pitmad hashtag, a feed that could be monitored by agents, editors, and other interested parties. 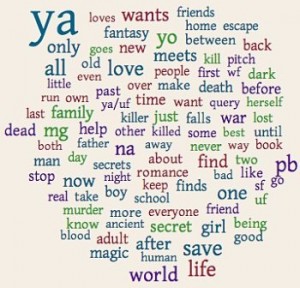 Since I’m a scientist, I couldn’t resist a quick analysis of the feed. So I took 10,000 tweets from the latter half of the contest, removed the spam, and came up with this word cloud. Genre tags were among the most prominent word, with young adult (YA) dominating. After that, you have words that we authors employ to grab attention and build tension: love, wants, killer, now.

There’s a decidedly YA focus for #PitMad, but that’s all right. Even writers in the adult genres share the benefits of entering a Twitter pitch contest.

A good pitch, according to some of the agents who were involved, should present the character, the central conflict, and what’s at stake. Doing that in a two-paragraph query letter is challenging. Pulling it off in 140 characters is damn near impossible! Ten of those characters go to the hashtag and genre, so we’re really talking about 130.

Because this (just like anything else an agent or editor sees) is a writing sample, I resisted the temptation to compress my text via “Twitterspeak” (4=for, 2=to, ur=your), etc. I spent a lot of time working on pitches. The first one I came up with for THE ROGUE RETRIEVAL, my adult science fantasy novel, was:

A Vegas magician brings modern tech and magic tricks into a medieval world that has the real thing.  #PitMad Ad SF

Another pitch, written from the perspective of the rogue himself, was this:

A man who spent his life studying a pristine medieval world goes AWOL when he uncovers his company’s plans to invade it. #PitMad Ad SF

I did try some alternative pitches where I played with the language, cutting corners to save space the way newspapers do with their headlines. My favorite of these:

Company discovers portal to another world, invests millions in secrecy. Then one of their own goes in. To save it. From them. #PitMad Ad SF

The more I wrote these pitches from the perspectives of different characters, the more I improved at tightening down the absolutely critical elements of my novel’s plot and stakes. For that alone, it was an extremely valuable exercise.

The more obvious benefit to #PitMad, and what likely drew most of its entrants, was the fact that agents and editors were monitoring the feed. If they liked your pitch, they’d mark it a “favorite” on Twitter. This is essentially an invitation to query or submit the work being pitched. Is it a guarantee of representation or publication? No. But it’s a chance to pique the agent’s interest, and perhaps win a free pass over the desk of the agency screener.

The forum for this contest (Twitter) is that it’s completely open access. Open for anyone to enter, and open for any agent or editor to watch. Your dream agent could be monitoring the feed; there’s no way to know. We also encountered some irritating spammers, who started hitting the hashtag when it began trending on Twitter.

Reality check time. You know that there’s ridiculously high competition to land agents or get published, right? I looked at the favorites of 4 agents and 2 editors who were openly participating (like I said, Twitter is open). On average, they chose about 14 pitches apiece. The range was 1 to 27. So it’s not an agent free-for-all. By my calculations, there were 800 or 900 active pitchers, so assuming no overlaps among the agent/editor favorites, (which there were, by the way), the odds of success were just under 10%.

Is that number both disappointing and familiar to you? It’s right around the success rate for queries among highly sought-after agents. So this is a fun contest with great participation, but it’s not a shortcut to breaking out.

That said, there is a guaranteed takeaway from this contest and others like it: a full day spent with the vibrant community of aspiring authors. Interacting with some of the other participants (not just the agents and editors) was my favorite part of #PitMad. I enjoyed reading the pitches, and commenting on some of my favorites.

Lots of people were following and retweeting, sharing critiques, offering encouragement. It was fun. I followed a bunch of new people, and then started visiting their blogs.

Writing tends to be a solitary endeavor. It can be lonely. Authorship, however, is just the opposite. You’re probably more likely to succeed if you join and participate in the community through events like this one.

Be sure to check out my guest post on Brenda Drake’s blog, Twitter Pitching: Hard Numbers from #PitMad.