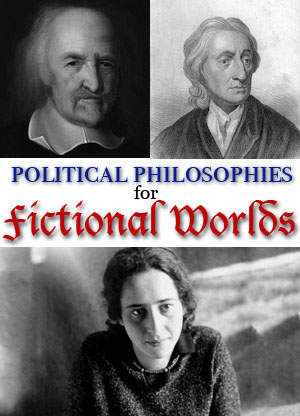 This article on political philosophies in fiction is part of the Science in Sci-fi, Fact in Fantasy blog series. Each week, we tackle one of the scientific or technological concepts pervasive in sci-fi (space travel, genetic engineering, artificial intelligence, etc.) with input from an expert.

Kate Heartfield graduated with an honors degree in political science from the University of Ottawa in 1999, and a master of journalism degree from Carleton University in 2001. She served for more than a decade on the editorial board of the daily newspaper The Ottawa Citizen, a job that involved regular debates that might draw on John Stuart Mill’s ideas about free speech, for example, or Adam Smith’s ideas about trade policy. Her short fiction has appeared in places such as Strange Horizons, Escape Pod, and Daily Science Fiction. Her debut novel, Armed in Her Fashion, will be published by ChiZine in May 2018.

The decisions we make as writers of speculative fiction depend a great deal on how we see our own world.

If we create a fantasy world, an alien planet or a future Earth, do we want to use the modern concept of states, as articulated by the philosopher Max Weber? (A monopoly of the legitimate use of force within a given territory.) Or do we want some other model for how peoples govern themselves?

If we’re writing about a period of anarchy, or the rise of tyranny, what can we predict about how people would react? What assumptions have we built into our utopias and dystopias? Why do villains succeed or fail? Does history happen in cycles? What long-term effects does colonization have?

Here’s an introduction to some of the political philosophers I use as touchstones in my own work: Thomas Hobbes and John Locke, John Rawls and Robert Nozick, Steve Biko and Frantz Fanon, and Hannah Arendt.

A few caveats: I don’t necessarily agree with all of the work I’ll discuss below. I just find these particular writers to be useful starting points or representatives of a particular worldview. And it’s certainly not intended to represent the whole field of political philosophy. For one thing, my own education was heavily skewed toward (patriarchal, white) Western philosophy. But I hope it’s a useful demonstration of how these ideas can inform speculative fiction. At the end, I’ll briefly list a few more names that might be useful to writers working on particular topics. 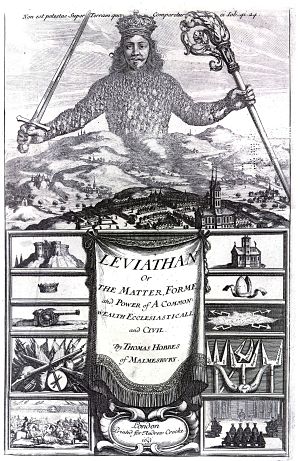 I had to start with Hobbes, because let’s face it: He wrote a book with the very SFF title of Leviathan with a very SFF illustration for the frontispiece. Hobbes was an Englishman who lived from 1588 to 1679, so the backdrop to his work is the English Civil War.

He is best known for his theory about the condition of humanity in a “state of nature.” In the absence of government, he wrote, a human life is “solitary, poor, nasty, brutish, and short.”

To avoid that, according to Hobbes, human beings surrender their rights to the sovereign in a “social contract.” The sovereign’s power derives from the people, but the sovereign’s will is incontestable. Civil society is a massive beast united under one will: The Leviathan. 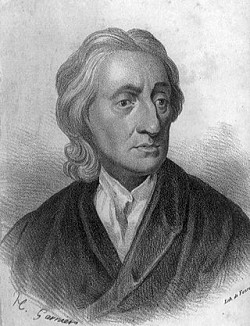 John Locke also wrote about social contracts, but he had a much rosier idea of how humans would act without an authority to tell them what to do. He wrote that the state exists to protect inherent rights, not take them. His observation that “princes” exist in a state of nature is a precursor of the notion that international relations are fundamentally “anarchic”; that is, states do whatever they can get away with – but often they act well toward their neighbors, because it’s in their interest to do so.

So if you sit down to write, say, a Game of Thrones-style fantasy, you’ve got to decide (even if subconsciously) how you understand the social contract – and perhaps more importantly, how the rulers in your world understand it.

I’m going to depart from dueling white men in a moment, but before I do, here’s another fundamental disagreement about the nature of society that I find really useful as a writer. This one comes from two American philosophers of the 20th century.

What is the best society?

John Rawls began his answer with a thought experiment: the “original position.” Imagine you are behind a “veil of ignorance” that prevents you from knowing what your gender is, or your aptitudes or abilities, or your cultural background, your sexuality, your religion…. In this situation, Rawls says, it would be irrational for anyone to propose, for example, race-based slavery, because no one would know whether they would end up enslaved. It’s in every individual’s interest to ensure freedom. Rawls argued that it would also be in every individual’s interest to ensure a certain level of equality, since one can’t know whether one would be born into a poor family or a rich one. 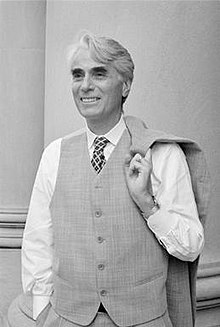 Robert Nozick argued against the idea that justice requires the redress of inequality. He began with the axiom that individuals have rights, including a right to use their property as they see fit. One of his famous thought experiments goes roughly like this: if hundreds of thousands of free people want to pay small amounts of their money to see an athlete play, and the athlete becomes wealthy as a result, it is not just to take the money away from the athlete and give it back to the people who paid it with full consent in the first place.

Another of Nozick’s thought experiments will be familiar to any reader of science fiction: the “experience machine.” If you could choose to plug into a fail-proof machine that would perfectly replicate all of your dreams — a happy romance, say, or a million-dollar book deal, or the birth of a child — would you do that rather than live your life? Nozick thought people would not choose the machine, because being and doing are central to the human experience, beyond mere comfort and pleasure.

Speculative fiction writers are, after all, engaged in creating thought experiments of their own. What happens when someone wants to leave the perfect society? Are freedom and equality two words for the same thing, or are they fundamentally opposed? What is a just government?

Steve Biko is best known as an activist, murdered by the South African government in 1977. He was a brilliant writer and political thinker: his essays and articles are collected in the book I Write What I Like.

His observation that “the most powerful tool in the hands of the oppressor is the mind of the oppressed” should inform every book that portrays oppressive societies (including our own). As a proponent of the black consciousness movement, he argued against the sort of blithe assurance of post-racialism that many white liberals espouse, the superficial integration in which white power structures remain intact. “I am against the intellectual arrogance of white people that makes them believe that white leadership is a sine qua non in this country and that whites are the divinely appointed pace-setters in progress. I am against the notion that a settler minority should impose an entire system of values on an indigenous people.”

Biko wrote those words in an article titled “Black Souls in White Skins?” It’s an echo of the title of the Frantz Fanon book, Black Skins, White Masks. Fanon was born in Martinique and went to France to fight with the Free French Forces in 1943. He eventually moved to Algeria and supported the independence movement there (and wrote in defence of violence in liberation movements). He wrote about the psychological oppression and the obliteration of culture that are part and parcel of colonization, and ended his book The Wretched of the Earth with this call: “Let us reconsider the question of mankind. Let us reconsider the question of cerebral reality and of the cerebral mass of all humanity, whose connexions must be increased, whose channels must be diversified and whose messages must be re-humanized.”

Any speculative fiction writer who is tackling themes of oppression, subjugation, genocide and colonization needs to consider the psychological and cultural effects, both in her characters and in her own mind. 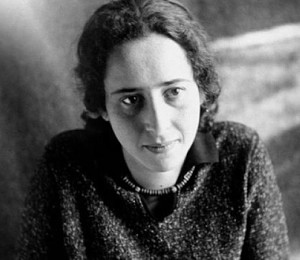 We writers spend a lot of time dreaming up our larger-than-life, mustache-twirling villains. I love writing those characters. They’re fun. And often, the misunderstood and crotchety are not as evil as they seem: think of Elphaba in Gregory Maguire’s novel Wicked, for example, or Maleficent in the eponymous film.

But when Hannah Arendt found herself facing a real-life villain, she saw something both more evil and more ordinary than any invented antagonist: “Justice insists on the importance of Adolf Eichmann, the man in the glass booth built for his protection: medium-sized, slender, middle-aged, with receding hair, ill-fitting teeth, and nearsighted eyes, who throughout the trial keeps craning his scraggy neck toward the bench (not once does he turn to face the audience), and who desperately tries to maintain his self-control—and mostly succeeds, despite a nervous tic, to which his mouth must have become subject long before this trial started.” Her report for the New Yorker on the trial of Adolf Eichmann, one of the main architects of the Holocaust, became the book Eichmann in Jerusalem: A Report on the Banality of Evil.

That evil is banal does not make it any less terrifying; quite the opposite. It’s comforting to think that evil must only be committed by comic-book masterminds. “For all this,” wrote Arendt of the task facing the courtroom and those in it, “it was essential that one take him seriously, and this was very hard to do, unless one sought the easiest way out of the dilemma between the unspeakable horror of the deeds and the undeniable ludicrousness of the man who perpetrated them, and declared him a clever, calculating liar—which he obviously was not.”

Many novels tackle the nature of evil, and many novels fail. It’s difficult for any writer to capture how evil can sit in the most pitifully human breast without making the grave error of seeming to sympathize with it. I turn over and over again to Umberto Eco’s essay Ur-Fascism, in which he wrote, “I can even admit that Eichmann sincerely believed in his mission, but I cannot say, ‘OK, come back and do it again.'” For writers, I think the job isn’t to humanize our villains, but to portray how villainy can so easily infect humanity.

I could go on, and on. But I’ll just mention a few more of my personal touchstones and reference points. Mary Wollstonecraft and Virginia Woolf on the rights of women. Edward Said on orientalism. Francis Fukuyama on history and progress. Machiavelli and Sun Tzu on strategy and leadership. Michel Foucault on power and social control. Jeffrey Sachs and William Easterly on poverty and development. Alexis de Tocqueville on tyranny and democracy.

About Armed In Her Fashion

Editor’s note: Kate Heartfield is a talented writer and a dear friend of mine. Her debut novel Armed In Her Fashion has just been released by ChiZine publications. Here’s the scoop: 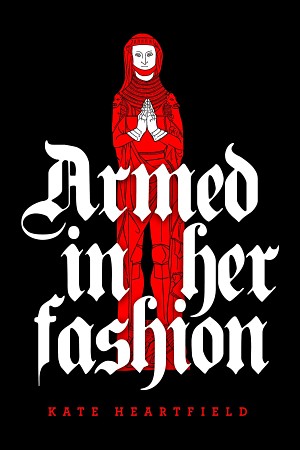 In 1328, Bruges is under siege by the Chatelaine of Hell and her army of chimeras―humans mixed with animals or armour, forged in the deep fires of the Hellbeast. At night, revenants crawl over the walls and bring plague and grief to this city of widows.

Margriet de Vos learns she’s a widow herself when her good-for-nothing husband comes home dead from the war. He didn’t come back for her. The revenant who was her husband pulls a secret treasure of coins and weapons from under his floorboards and goes back through the mouth of the beast called Hell.

Margriet killed her first soldier when she was 11. She’s buried six of her seven children. She’ll do anything for her daughter, even if it means raiding Hell itself to get her inheritance back.