If you haven’t already heard, I’ll be returning as a mentor for Pitch Wars. It gets better: This year, I’m co-mentoring with Michael Mammay, my talented 2015 mentee who’s now represented by Lisa Rodgers of JABberwocky Literary Agency. He’s contributed this informative blog post with some advice on preparing for Pitch Wars. If you like it, you should follow him on Twitter.

Preparing for Pitchwars: A Tale of Two Entries

Are you excited for Pitchwars? If you’re an author looking to take the next step in your writing journey, you should be. The annual writing contest that starts near the end of July every year pairs writers without agents with more experienced writers—mentors—who work with them for about two months, helping to revise their manuscript in preparation for the agent round and querying.

Since it starts in late July, you might wonder why I’m writing about it now. First, it’s that awesome. It can’t be contained in just one month. Of the 125 finalists from last year, over a third now have agent representation, and that number will continue to rise. But mostly I’m telling you now so that I can share with you the parable of the two entrants.

Author One finished his novel in late July. He hadn’t had any other writers read it for him, but a couple of his friends read it and told him it was good. It didn’t really meet industry norms for length, and the prose was…let’s be polite and say ‘unpolished.’ He was starting to query when he noticed this contest opening, and figured what the heck. He picked some mentors after about five minutes of research, including one who wasn’t even looking at adult category manuscripts. He joined Twitter and had a lot of fun meeting other writers.

Author Two finished his novel in March. He had a group of beta readers give notes, then he re-wrote it. Then he sent it to another group of critique partners, and they gave notes. And he rewrote it again. Then he sent it to one last critique partner, and revised it one more time. By that time, it was July, so he decided not to query, since Pitchwars was right around the corner. He used the extra time to interact with other people in the contest, have fun, and had a few more people look at his first chapter, just for good measure.

Pitchwars is extremely competitive. Last year almost 1600 entrants competed for only 125 spots. What I want to do is give you some tips that you can start using now that will increase your odds of making it into that top 8%.

Follow her blog. Follow her on Twitter. Follow her to the mall, if you can manage it (Just kidding. Although she does do book signings, so you could follow her there.) Brenda’s blog will announce all the dates, but will also tell you about upcoming workshops where mentors work with prospective candidates before the contest even starts, to help prepare them.

There are a lot of talented writers out there, and the bottom line is this: If you want to get in, you need to write well. The best way you can spend your time is working on your craft.

Get other writers to read and critique your book. I took a poll of the people who made it into Pitchwars in 2015. Of t he 74 people who responded, 64 of them had other writers read for them . I made a pie chart. As one does. 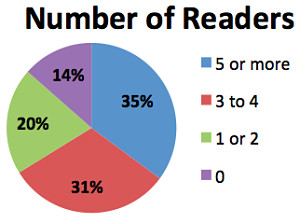 Only ten successful entrants reported being selected by a mentor without other readers first. So it can be done. But if you want to maximize your chances, you should find other writers to read and give honest feedback on your work. More is better, but I think most authors would tell you that one or two really good critiques beats a dozen mediocre ones.

If you can’t find other writers who are willing to read for you, hire an editor. I’m not here to advertise for anybody, but there are plenty of them around. Go on twitter and ask for recommendations. Ask for a reference in the comments of this post, and I bet you’ll get a few. Do your research. Here’s the key: you don’t have to spend a lot of money. You don’t need to run out and get a full manuscript critique. The most valuable critique I got in my life was given to me by author Wren Michaels, and she only read 250 words for me. In one page, she showed me that my writing needed work, and from there I knew I needed to get better. Send an editor your first five or ten pages. From that, you’ll see where you need work, and you can apply it throughout your entire novel.

If you don’t have time to get readers on your entire book, focus on the first fifty pages. Because of the nature of the contest, mentors aren’t looking for perfect. Most of them are looking for something they can work with. A spark. If you show that you can do that in the first act of your book, you’re in the mix.

When you query, you want to do it with the best possible book you can. You get one shot with an agent. If you waste it on a book that’s not ready, that opportunity is gone. If you’re going to shoot for Pitchwars, when you come out of it after working with a mentor, your book will be better than when you entered. That will put you in the best light in both the agent round, and when you query.

The better you prepare, the more likely the odds of getting in. Start now, and your odds go up. With that said, if you’ve got a query-ready book, enter. Going back to the example above, the reason that Author One became Author Two is because he learned. He met other writers and critique partners in Pitchwars 2014, and from that developed and wrote a better book for 2015.

And of course no Pitchwars post would be complete without an announcement. For 2016, the host of this website, Dan Koboldt, and I are forming a team and will co-mentor. We can’t tell you too much about it until the mentor blog hop in July, but we will be looking to mentor one writer in the adult category. I don’t want to over-hype it or anything, but some people are already referring to it as a dream team. Okay, that might just be me. #DreamTeam