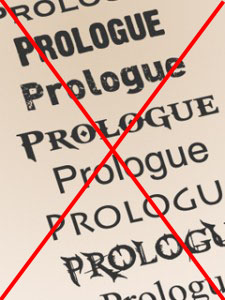 Prologues are a long-running tradition in some genres of fiction, especially epic fantasy. Those of us who grew up reading Robert Jordan and George RR Martin have almost come to expect them at the start of the tome-sized fantasy novel.

Most of those who write SFF are also readers of SFF. We’re under the spell; we like to start things off with a prologue. It lets the writer do a number of things:

The Wheel of Time Prologue

Robert Jordan’s prologue in The Eye of the World (Book #1 in his WoT series) offers a classic example (Warning: spoiler ahead). The brief but powerful scene shows a man wandering through the scene of a massacre — one he created, but is unable to recognize — until he’s confronted by his enemy, who heals him enough to glimpse the reality of what he’s done.

Chapter 1 takes place hundreds of years later with the book’s actual protagonist. And the prologue, it turns out, had all kinds of foreshadowing for what’s to come. That insane man from the massacre is long dead, but… well, let’s just say, we’ll meet him again later.

The Prologue Problem in Modern Publishing

When I began querying literary agents, I did a huge amount of research. In this information age, it’s remarkably easy to collect data about what agents and editors are looking for, so much that I find it surprising when poorly informed would-be authors query agents with a genre they don’t represent. But I digress.

Agents are often asked about the things that make them pass on partials or complete manuscripts. When agents who represent fantasy/sci-fi get this question, they often remark on prologues. Simply put, most agents hate prologues. Why? Mainly because prologues:

Notice how similar those are to the reasons fantasy authors like prologues?

This very topic was discussed on my favorite writing-related podcast, Writing Excuses. Brandon Sanderson pointed out that prologues have been done so often in fantasy books that they’re almost a cliché. He warned against using them. And remember, Mr. Sanderson’s not a literary agent or an editor. He’s the author tapped to finish Robert Jordan’s Wheel of Time.

The publishing industry has changed Jordan and Martin and other scions were cutting their teeth. A new author trying to break in now faces more competition than ever before. One consequence is that the first chapter of a novel is super important. It’s often make-or-break for a book. The literary agent will read it, as will the editor, and eventually the customer before deciding to hit the Buy Now button.

It should probably not be about something that happened years before the story begins.

I have heard literary agents say that 90% of prologues are unnecessary. This means that the vast majority of aspiring fantasy and sci-fi authors who have a prologue at the beginning of their book need to cut it. I can tell you from first-hand experience that they won’t like hearing this, even as a small part of them recognizes the truth to it.

At least, that’s how I felt when I was told to cut the prologue from my adult fantasy novel. I’d written it from the POV of a character I loved, and it covered a pivotal moment in the story. I love my prologue, but it had to go. I knew I had two options:

The time I spent writing the prologue — or other parts of the book that had to be cut, for that matter — was not wasted. It served me in getting to know the characters better, and in plain old practice at the writing craft. It truly gave me the impetus to write the rest of the book. Sure, I had to cut my prologue from the polished manuscript, but (in my mind), it will always be an important part of my novel.

What’s Your Opinion on Prologues?