Some time ago when I was new to the publishing industry, I followed lots of already-established authors to collect advice that I hoped to use when I broke in. And in my ever-growing collection of notes, I had a list from Kevin Hearne of epic bookstores throughout the US where SF/F authors go for events. In Denver it’s Tattered Cover. In Portland it’s Powell’s City of Books, or the Beaverton store. And in San Diego, it’s this place:

Mysterious Galaxy. It sounded like a really cool shop. And it’s in San Diego, one of my favorite cities in the world. So I thought it would be really cool to do an author event there someday.

Of course, I held no disillusions about going on book tour or anything like that. Although a few bookshops have been wonderfully supportive of my career — such as Left Bank Books in St. Louis and The Book Loft in Columbus — these were local stores. Like most authors, I don’t usually have a great excuse to travel to the other side of the country for a book event.

Last week, however, all of the planets aligned. It was release week for Putting the Science in Fiction, my nonfiction book with Writer’s Digest. I was going to be in San Diego for the American Society of Human Genetics annual meeting. And by chance, three of my book contributors would be in town as well: Danna Staaf (marine biology), Gwen C. Katz (chemistry), and Amy Mills (structural engineering).

Maryelizabeth Yturralde of Mysterious Galaxy generously offered us a slot on Thursday evening to do a science in sci-fi panel. I walked into the fabled bookstore that evening, and this was the first thing I saw:

Part of me still can’t believe that it actually happened. But an even greater thrill than seeing my books was meeting my contributors in person. We had an awesome time discussing the science of sci-fi and what it was like to put together the book.

My panelists were amazing. We discussed science, technology, and creepy things that live in the ocean. We talked about explosions in space. Most of the time, all I could think about was how lucky I was to have landed an event with these cool people at this incredible bookshop: 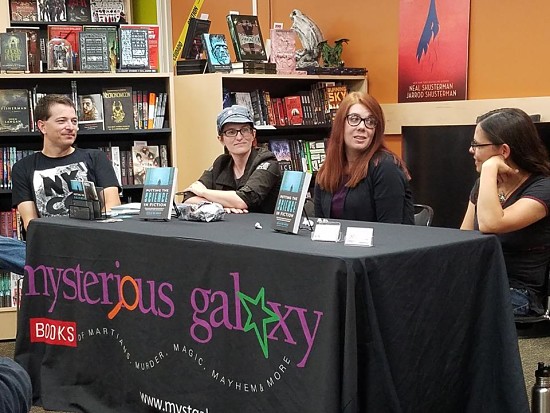 The audience got involved, sharing some of their impressions about SF/F in the media. We had a great discussion and could have talked for another hour. Check out my shared album for some more photos. 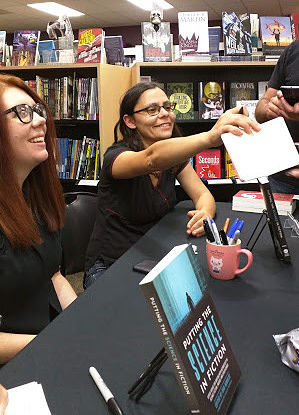 Sadly, we had to wrap it up in order to sign some books. Which was about when I learned that I’ve been doing this whole book-signing thing wrong. Gwen signed my copy of Among the Red Stars with bold, beautiful strokes. And Danna can draw! She sketched a giant squid when she signed my copy of Squid Empire.

We also signed a number of copies of Putting the Science in Fiction for the bookstore. So if you order it from them, there’s a good chance you’ll get a book signed by FOUR of its contributors. That’s a rarity, so I hope you’ll take advantage. You can also find PSIF at B&N, IndieBound, and Amazon.

I’m grateful to my panelists for crushing it on our panel, to the bookstore staff (Darcy and Nicholas) for hosting us, and to everyone who came out to support the panel. We had a great time, and I’ll absolutely be looking for an excuse to come back.