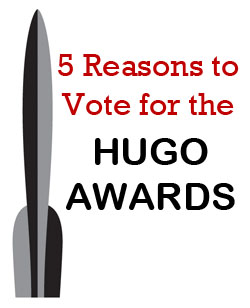 1. Anyone can vote for the Hugos

The SF/F genre has many literary awards, but your ability to influence them varies widely. The World Fantasy Award and Philip K. Dick Award are decided upon by panels of judges. Members of the Science Fiction and Fantasy Writers of America select the Nebula Award winners, which is more democratic, but you must meet membership requirements (professional paid sales) to join.

The Hugo Awards are the most accessible for emerging authors and fans. The Hugo ballot — and the eventual winners — are selected via popular vote by Worldcon members. You don’t have to attend Worldcon to vote; all you need is a supporting membership. It costs $40, which isn’t nothing, but that’s a small investment to become part of a vital process.

2. Expose Yourself to Other Forms of SF/F

Most of us read enough novels to know how we want to vote in that category. Novels and series are the bread-and-butter of the SF/F genre. Furthermore, after the commercial success of Game of Thrones, Westworld, and other franchises, there are arguably more people reading SF/F novels than ever before. Thousand of people vote for the “best novel” Hugo Award.

I wish we could say the same about short stories, novelettes, and novellas.

Short fiction is a critical form of SF/F literature, and indeed is how many of us learned how to write. There are some wonderful markets that publish it — Clarkesworld, Galaxy’s Edge, and Nature, just to name a few — but the readership is much, much smaller. The Hugo Awards are a great opportunity to discover, read, and reward outstanding works in these briefer formats.

3. Your Votes Are Sorely Needed

Unless you’re new to the literary community or lived off the grid for the past few years, you probably heard about the controversy surrounding the Hugo Awards for the past few years. The details are unimportant. Briefly, some people who were unhappy with past awardees established voting blocs to dictate which works got onto the ballot. Other people were alarmed/dismayed, and established a counter-movement, the net result being that no award was given in several categories.

There were some upsides to this crapstorm, but mostly, there were downsides. It not only divided the SF/F community, but also marred the reputation of an otherwise prestigious award. Worse, it happened because of the simple fact that not enough people nominate for the Hugos.

As the United Kingdom and the United States were shocked to learn, voter apathy does not serve the republic. That’s why we need as many people as possible to participate in the Hugo Awards, to prevent manipulation of the system and ensure that the awards represent the opinion of the entire SF/F community.

One of the best reasons to participate in the Hugo Awards is simply to add your voice to the SF/F community. Maybe you read a really great book and want other people to know about it. Maybe you know an emerging author, artist, or editor who’s doing important work. Heck, maybe you’re an indie author and want to see more non-traditionally-published works on the ballot.

The best way to share your opinion is to vote. Our community is small enough that every voice can still be heard. Take advantage before that changes.

5. It’s Easy to Get Started

Some people are reluctant to commit to something like Hugo Awards voting because they don’t know where to start or don’t feel that they read/saw/watched enough SF/F to be a good judge. Well, first of all, you should know that you don’t have to nominate/vote in every category, nor are you required to fill all slots. Only do it where you’re comfortable. Now, here are some places to start.

One good place to start is the Nebula recommended reading list compiled by members of SFWA. Now you have a head start on the fiction categories. Other sources of novel recommendations include:

It’s harder to find recommendations for these categories, and indeed these are some of the least-voted in. Luckily, there are SFWA recommended reading lists for short stories, novelettes, and novellas. You might also look at the eligible stories from professional SF/F magazines:

Here’s the best part: most of them will let you read the eligible stories for free.

My suggestion for this category is to find the short fiction (or magazine) that you like the most, and nominate its editor. See my bullet list above for some suggestions.

This is a more difficult unless you happen to be familiar with editors at major SF/F houses. If you read a great novel in 2016, check the acknowledgements section (where most authors will thank their editor). For example:

This category is for nonfiction books, essays, blog posts, etc that are related to the field of science fiction and fantasy. For example, The Geek Feminist Revolution by Kameron Hurley is an eligible nonfiction book from Tor. My essay for the SFWA blog, We Are All Allies, is also eligible.

You can nominate and vote for two types of dramatic presentation. These are for movies and television shows that could be classified as science fiction or fantasy.

Best Dramatic Presentation, Long Form is basically your favorite sci-fi or fantasy film. Last year, The Martian somehow beat The Force Awakens. The year before, the winner was Guardians of the Galaxy.

Best Dramatic Presentation, Short Form is for an episode of a television show. Recent winners were episodes of Jessica Jones, Orphan Black, and Game of Thrones. I’m betting we’ll see an episode of Netflix’s Stranger Things on the ballot this year.

Last but not least, we come to the so-called non-Hugo Award, the Campbell. This is for the best new writers who was first published within the last two years. This means that new authors have two years of eligibility. For example, The Rogue Retrieval was published in January 2016, which puts me in my first year of eligibility.

More information and a complete list of eligible writers can be found on this page at Writertopia. I recommend you peruse that, and find five of your favorite authors to nominate and vote for.

What Are You Waiting For?

Head over to the Hugo Awards website to learn how you can participate in these awards.