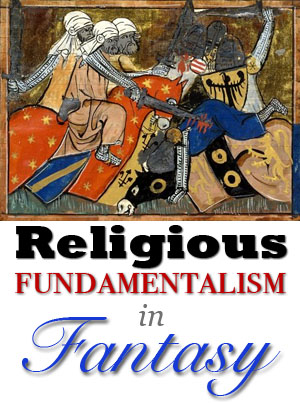 Spencer Ellsworth has written four drafts, at about five hundred thousand words, of his Crusades fantasy novel, as yet unfinished. He has also done research and written on Arthurian literature and codes of chivalry and other codified medieval violence.

He is an award-winning short story writer whose work has appeared in The Magazine of Fantasy & Science Fiction, Tor.com, Lightspeed Magazine, Beneath Ceaseless Skies and others. The first book in his Starfire trilogy, a space opera, is coming from Tor in 2017. He writes about parenting and writing at his blog, and twitters @spencimus.

Beautiful redhead wants freaky sex and demon pregnancy, oh, and she wants to tell you about Jesus. Do I have your attention?

Good. We’ll get back to her in a moment.

I was on a panel a few years ago, talking about good old history, and when the Crusades came up, an audience member declared, “Well, the Crusades were about loot!”

As someone who’s read every book about the Crusades that came out in the last ten years, I can authoritatively say:

Not at all, in some cases.

(Although very much so at times.)

(I am not an expert in crazy redheads.)

There’s a dichotomy in our minds when it comes to crusaders. Modern skepticism, and our modern experience of religious fundamentalism, paints crusaders as either gold-crazed looters, or frothing religious nutballs. We see them the way we see fringe societal elements today. Weirdos. Vicious murdering lunatics.

It’s hard to accept that someone can slaughter a city full of Muslims and Jews of all ages because complicated reasons.

Melisandre of Asshai, in A Song of Ice and Fire, and the Children of the Light, in The Wheel of Time, both share the crusaders’ battle cry of “God wills it!” but in most respects, they’re more ISIS than medieval.

Fundamentalism is really a modern phenomenon, reacting to a diverse religious state. Call it the Enlightenment, call it liberalism, call it Westernization—fundamentalism exists to assert religion as a societal force in a world that can easily make religion irrelevant. We live in a society that demands separation between church, school, bank, and entertainment.

In the medieval world, crusading and other religious violence went mainstream as post-1994 Green Day. Medieval society surfed on waves of mainstream revivalism.

The Start of the Crusades

The First Crusade came about because Pope Urban II had been asked, by the Byzantine emperor, for help in regaining lands he’d lost to Islamic armies, and holding onto the lands he had. Pope Urban saw this as his chance to deal with a major issue of the day: violence between Christians. For a land that was supposed to be united under Christ and the Roman Church, Europe was a fractious, bloody place.

One infamous sermon later and Urban had created a social movement. Thousands of lords and tens of thousands of pilgrims sold everything they had and hit the road to take Jerusalem back.

Godfrey of Bouillon and his brother, Baldwin, both heroes of the First Crusade, appear to be on the two sides of the looter/devout madman coin. Godfrey stayed with the First Crusade all the way to Jerusalem. Upon the conquest of the city, (which involved killing so many Muslims and Jews that “blood ran up to the knees”) Godfrey refused a proffered kingship. He would not be king in the city where Christ was king.

His brother, Baldwin, had no trouble accepting that kingship after Godfrey died. This after Baldwin had abandoned the First Crusade to run off and acquire the Armenian Christian principality of Edessa by very devious means. Were they two sides of the looter/devout coin?

Godfrey was no doubt devout, because he had reformed after years fighting the papacy. There was genuine humility in his crusading, but there was also realpolitik. He wanted to leave his family in the papacy, and God’s, good graces.

That was more important than his finances—because, for all the “loot” in the Levant, he had mortgaged his entire estate to go on crusade.

His brother Baldwin couldn’t have been entirely mercenary, though. He also sold his considerable holdings in France to go on the First Crusade. He cared about his salvation, but he also cared about his bank account, and his takeover of Edessa shows it.

Godfrey and Baldwin saw feudalism and Catholicism as the organizational instruments of God. They believed in God, Heaven and Hell, the Pope and the divine right of the king all wrapped up in a nice little box.

This is why Dante placed Brutus and Cassius at the same level of Hell as Judas. For Dante, a betrayal of Caesar was a betrayal of God. (Never mind that Caesar wouldn’t have cared for Jesus; he was the founder of the Holy Roman Empire and thus godly by Dante’s retcon.) That didn’t preclude criticism of the system, but this is why even a thinker as incisive as Dante never questioned the notion of divine investiture, and why the reformers in the Renaissance were often as intolerant within their self-established systems as Catholics had been. Most Muslims, for that matter, didn’t question the need for a caliph, for all that their own religion never specified a central authority.

Most fantasy heroes are anachronistic. Given a few hundred years of Enlightenment mindset and democracy, we tend to write heroes who look on kings and Popes and claims of godliness with suspicion, who recoil with horror at war and intolerance, who have hot sex without worrying what God would think.

Melisandre might have been able to turn Stannis against the Great Sept of Westeros, but in medieval Europe all the freaky demon sex in the world wouldn’t turn a savvy politician against Jesus, not just because the politician was being smart but because any medieval thinker would hedge his/her bets on the afterlife. And though Robert Jordan based his extensive world on the 17th century, just about every governor in the 17th century would agree with, and field their own version of, the Children of Light. (That Protestant Reformation helped solve the issue of societal violence between Catholics with a mass exodus from Catholicism. Now you could kill other Europeans and heathens at the same time!)

Not that you should go write fanatics—readers want anachronistic heroes. Godfrey is a sympathetic character until you find out that he mowed down Muslims and Jews from the back of his horse. But there are few quasi-fantasy medieval worlds that show how intricately faith was woven into pre-industrial society. Lois McMaster Bujold’s Chalion series gets this right, and collected a slew of awards for it.

As for sorcerous redheads, male, female or otherwise, if you do meet one, just remember that God demanded the crusaders’ piety, bloody-mindedness and bank accounts, and any redhead who demands that is probably as much trouble as the medieval God.