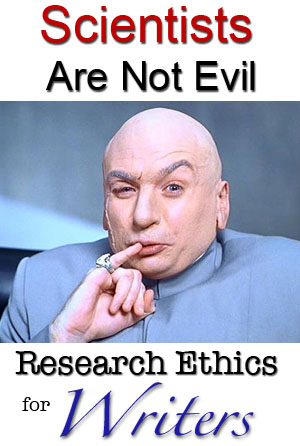 This article on writing about research ethics is part of the Science in Sci-fi, Fact in Fantasy blog series. Each week, we tackle one of the scientific or technological concepts pervasive in sci-fi (space travel, genetic engineering, artificial intelligence, etc.) with input from an expert. Please join the mailing list to be notified every time new content is posted.

Today’s expert is genetics researcher Dan Koboldt. He became a researcher in 2003 when he joined a laboratory at Washington University that was part of the International Haplotype Mapping Project (the sequel to the Human Genome Project). Over the next fourteen years, he worked on the 1,000 Genomes Project, the Cancer Genome Atlas, the Alzheimer’s Disease Sequencing Project, and other research efforts. He also co-authored more than 70 publications in Nature, Science, The New England Journal of Medicine, and other scientific journals.

As you probably now, Dan dabbles in science fiction and fantasy. The final volume in his Gateways to Alissia series will be published by Harper Voyager on February 2018. He is also the editor of Putting the Science in Fiction, a reference for genre fiction authors that will be published by Writer’s Digest in Fall 2018.

Here’s a type of story I encounter far too often in science fiction. It’s the future. Medical and/or genetic technology has advanced to the point where we can do truly amazing things. But there’s a problem: the scientists who wield that technology have taken it and done EVIL. They’ve created a virus that wipes out most of the world population. They’ve genetically engineered an army of super soldiers. They’ve built cyborgs that turn humans into batteries.

Do any of these sound familiar? They should. I’ve just described the premise of some very successful science fiction franchises. Don’t get me wrong; I love sci-fi. There might even be a small part of me that takes grim pleasure imagining the dark possibilities of future science. But here’s the thing: having worked for fifteen years as a biomedical researcher, I’m keenly aware of just how implausible most of it is. Especially when it comes to the future of genetics, which happens to be my wheelhouse.

Today, I’m going to cover some basics about research ethics that will help you write a realistic story about science in the future.

Unless you’re completely ignorant of recent world history, you probably learned that Nazi scientists committed some fairly horrible atrocities in the 1930’s and 1940’s under the guise of medical research. Many of them were tried at the Nuremberg trials after World War II. The Nuremberg Code , issued in 1947, outlined ten principles for conducting ethical research.

These were somewhat ignored until 1964, when the World Medical Association issued a more formalized document based on the Nuremberg Code. This Declaration of Helsinki became the cornerstone of research involving human subjects in the modern world. There are a few central principles:

Although the Nuremberg Code and Declaration of Helsinki are not laws themselves, they outline the moral obligations of doctors and biomedical researchers. They also form the basis of actual laws governing research, such as the Code of Federal Regulations Title 45 Part 46 in the United States.

The laws governing research ethics are serious business. Researchers like myself are required to follow them if we want to apply for funding, publish our results, and you know, keep our jobs.

Here’s a useful concept for writers who want their future sci-fi to be somewhat realistic. Compliance with research ethics is monitored and enforced at the local level by an Institutional Review Board (IRB), also called an independent ethics committee (IEC) or ethical review board (ERB). This committee is formed by universities, hospitals, and other organizations to ensure that all research meets ethical guidelines.

The IRB has a surprising amount of power. Their approval is required before a research project can begin. They get to review everything: the study design, the consent documents, even the flyer that you want to put up on a bulletin board to recruit participants. If you want to change anything about your research study, you have to go back to them for approval first. They have the power to deny or revoke approval of your research at any time.

IRBs are themselves regulated by the federal government (in the US, by the Human Research Protections Office). For medical or behavioral research involving human subjects, IRB approval is required by law as well as by the journals that publish such research. This is true whenever you get support from the federal government, either directly or indirectly.

Could private companies get around this? I suppose, as long as their primary goal is to do evil rather than to make money. That’s the rub. Most companies conducting biomedical research are hoping to profit by selling drugs, devices, or services to the public. Which usually requires government support in the form of clinical trials and FDA approval. It’s thus very difficult to conduct unethical research, even with private investment.

You might be thinking, Okay, I’ll just have my evil scientist do his experiments on monkeys instead of humans, no ethics required. You’re adorable. Unfortunately for your evil scientist, research involving animals — at least in the US and most countries capable of doing advanced research — is also subject to research ethics. The Institutional Animal Care and Use Committee (IACUC) acts like an IRB-for-animals to ensure:

For example, if you’re giving a mouse an injection, you have to generally have give the mouse anesthesia or a painkiller first, just as you would with a human patient.

Animals have rights, too. Remember that.

This is not my primary area of expertise, but I have enough background in bioweapons research to tell you that there are many, many safeguards in place to prevent people from creating the pestilence that wipes out humanity. Or the virus that brings zombies to life. For further reading on this subject, I refer you to three in-depth articles in the Science in Sci-fi series:

There are also a number of international treaties concerning biological agents and weapons that provide further safeguards.

Science Pitfalls to Avoid in Writing

Now that you understand the basics of how ethics play a role in modern research, here are some pitfalls to avoid in your writing:

Evil researchers and nefarious scientific advances are tropes that occur far too frequently in science fiction. It’s especially distressing because the vast majority of doctors, scientists, and researchers have devoted their lives to improving human existence. We’re the reason you have aspirin, insulin, and Prozac. We’re also the reason you probably don’t have smallpox. Are there some bad apples? Sure, but they’re exceedingly rare. Twenty-plus years of required schooling tends to weed out most would-be villains.

The “science is evil” trope is extremely dangerous to our society and its future. Most scientists rely on public support for their research. We need not only grant funding, but study volunteers. We also need the support of educators, politicians, and the media. That’s last one is you, my writer friends. Your stories help shape public perception and opinion.

Researchers like myself devote a lot of effort to ensure that our work is accurate and unbiased. All we ask is that you do the same.