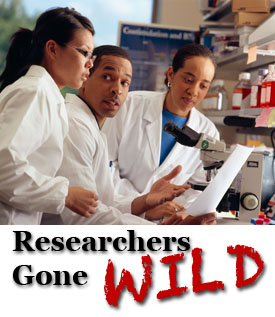 Gabriel Vidrine has a BS in Microbiology, and it’s all Richard Preston’s fault. Gabriel’s high school biology teacher read the opening chapter of The Hot Zone in class, and he became hooked into microbiology from then on. He’s been in research laboratories for over a decade and is now a laboratory manager. He has followed the Ebola outbreaks (as an armchair epidemiologist) since the 90s, and has plushie versions of Yersinia pestis, Ebola, the “Mars bacteria,” and the T4 phage. In other words, he’s pretty nuts about microbiology.

He is currently working as a lab manager, which means he is responsible for designing and implementing the experiments for the lab and teaching others how to do the same. He knows quite a bit about research methodology. You can find him on Facebook and Instagram.

We’ve read it before: mad scientists, weird science, and horrific experiments. Or maybe it’s heroic scientists working in state-of-the-art labs that produce miracles in minutes. Both of these portrayals of science are misguided; research just isn’t done that way. Here are some common myths about scientists and research.

We’re all pretty familiar with CSI: (the books are actually better than the TV show, in my opinion; Max Allan Collins and Jeff Mariotte are fantastic writers). The criminalists collect their samples from the crime scene, get them sent back to the lab, and within pages (or minutes) are getting their results. Of course, to hold a reader’s interest, an author can’t really say six months go by while Nick, Greg, and Sara work other cases and wait for the lab to work through the backlog to their samples. But that’s really what happens.

Science takes time. Even a fairly simple experiment can take days. Gene sequencing? Even with the best, most advanced equipment, it can take hours. And that doesn’t include the backlog, which can stretch that time out to months.

Myth #2: Scientists are greedy and have no morals

I find this one to be personally insulting. How many books have been published that paint scientists as greedy, amoral jerks who run whatever experiment seems likely to gain them the most money? How many books have an Apocalypse caused by the release of a deadly virus by a careless or crazy scientist?

Hey, come on guys, scientists are just like anyone else. We go to work, we do our job, and collect our paycheck. Most of us aren’t in it for the fame (haha!), riches (HAHA!) or for the power to destroy the human race. We do it for the science. News flash: science doesn’t (usually) pay that well.

Myth #3: The Myth of the Ridiculous and Illogical Experiment

Ever wonder why scientists are putting human genes into plants and animals? No, it’s not for fun, or because we’re amoral, weird, or evil. The reasons depend on what gene we’re talking about, but usually there is a logical reason, like trying to understand cancer or improving the food supply. “Frankenanimals” or “Frankenfood” are not “part-human” or “part-animal” though some mice are considered “humanized” (due to the expression of human-like genes in some tissues).

This does not mean that the strawberry you are eating is part fish. DNA is DNA, and a “fish” gene is not inherently “fishy” any more than any of your genes are fundamentally “human.” Their sequences, yes (gene sequences are considered “conserved” if they are similar, or homologous, across multiple species), but not the DNA itself.

So while that strawberry is expressing a protein normally found in fish, it is not “part fish.” So it’s not ridiculous to put some gene into an animal or plant it normally wouldn’t be found in; that “fish gene” actually protects that strawberry from a killing frost and has nothing to do with “being a fish.” Scientists don’t do ridiculous experiments. There’s not enough funding for that.

When I read Kim Harrison’s Dead Witch Walking I nearly threw the book across the room when I realized her Apocalypse was caused by “The Attack of the Killer Tomato.” While it is true that animal and human genes are used in plants or bacteria (and yes, sometimes animals like mice or rabbits), it is not true that a human virus put into a tomato plant can kill the vast majority of humans on the planet.

Proteins from viruses can, and have been, expressed in tomatoes and other plants. But there is no scientifically valid reason to grow a full human virus in a tomato. There are human cell lines (in vitro culture) designed for that.

Getting Research Right in Fiction

1. Your science – and your scientist! – shouldn’t be ridiculous

Think like a scientist! There needs to be a reason why the experiment is being done. If you can think of no reason other than, “My bad guy is a scientist, so he needs to do icky things like putting human eyeballs on tomato plants,” then you may need to rethink your plot. Your villain should have more dimension than that anyway, and scientists aren’t typically Evil Geniuses bent on world domination.

2. Science should be (a little bit) boring

Yeah, it might not be fun to read, but it will be much more realistic. Think of that time kind of like when your characters are going to the bathroom or eating lunch. Readers know it happens, but it doesn’t need to be in the story in detail (or even there at all). Plan your plot to include the time it takes for major discoveries (years, not hours), and if it just drags the story down then rearrange the timeline so that your characters have already put in the work before the book starts.

There are ways to work pacing into science so that the exciting stuff happens in the story. But make it clear that it took a lot of time and work to get there.

3. Ask a scientist or do research on your own

Look up what the scientific method is and why it’s important to science. Researchers are happy (usually) to share their knowledge about research methods, so contact one with questions. But the Internet is now one of the most powerful research tools on Earth. While Wikipedia or Google itself might of limited use, Google Scholar can link you to many published research articles. You might need a license to access them (try your local college library) but many are available for free.

All of the articles on PubMed Central are free and available to anyone and everyone to access. If you think someone might have done research similar to what you are writing about, check it out, and make your fiction much more realistic! (And keep scientists from chucking your book across the room.)