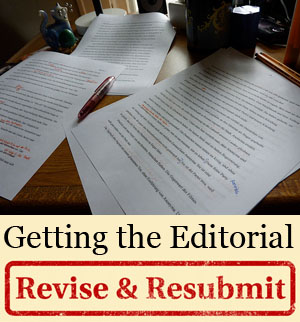 Image Credit: Get A Life, PhD

Modern technology has changed the publishing industry in countless ways. One of the most positive changes is the simple matter of accessibility: thanks to computers and the internet, millions of aspiring writers can chase the dream of publication. Even better, blogs and social media have provided a community where writers can support and learn from one another. This is all good stuff.

The Crowd in Publishing

On the other hand, we can’t ignore the huge supply-and-demand differential in traditional publishing: there are far more writers (and written manuscripts) than there are slots available. This differential, believe it or not, persists at every stage of the game:

Because of this differential, landing a literary agent is hardly a guarantee of publication. In most cases, it’s the beginning of a long process that makes the query trenches seem like a piece of cake.

Although we’ve all heard the exceptions — the overnight offer, or going to a week later — the typical submissions experience for an agented author goes like this:

Usually, the editor either responds with an offer or a rejection. But there are other possible outcomes:

Supposedly, the latter response (the R&R) is a rare and promising thing, a signal that an author’s work is on the cusp of success. However, I couldn’t help but notice that many agented authors (including myself) have gotten R&Rs in the past year, and it never seems to result in an offer.

But that’s just a feeling, without any hard numbers behind it. So I polled some agented author friends to ask if any had received an R&R while on submission. In total, I had 28 responses.

How Do Authors Respond?

First, I asked whether or not the author made the requested changes: 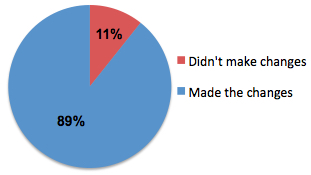 Clearly, authors take the R&R seriously, as almost 90% of them made the changes the editor requested. Having undergone the psychological torture process of submission, I understand this rather well: the author wants to do whatever he or she can to help the book’s chances.

What Results from an R&R?

Next, I asked those 25 authors what ultimately came of the R&R: 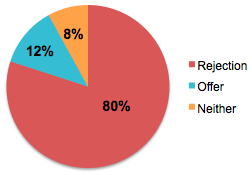 So, first the good news: three of the R&Rs resulted in an offer of publication. Hooray! One of those authors shared:

The edits took around 3 months. Editor took about 2 weeks to reread and the offer came shortly after.

My R&R is counted in the “neither” category above, because we got an offer from a different house. At least one of those “neither” responses is still waiting to hear back.

Most R&Rs Result in Rejection

However, we can’t ignore the rest of the pie chart: 80% of R&Rs still result in a rejection. Here are some of the comments responding authors left about their experiences:

The revision took me about 2 months, but when my agent resubmitted it, the editor never responded despite multiple nudges.

I had a long/detailed R&R edit letter, met the editor in person and discussed it, made the changes, went to acquisitions, got turned down by sales because they already had another book too similar.

I ended up being scared I wouldn’t be able to pull it off, so I panicked and rushed, and it was ultimately rejected.

The cold, hard truth is that, nine times out of ten, a revise-and-resubmit does not lead to an offer. I know this is difficult to hear for the author who’s desperate for some hint of not-bad news while on submission. But it counters the conventional wisdom that an R&R from an editor is close to an acceptance. These numbers would suggest that most R&Rs aren’t close enough.

Then again, we are talking about manuscript advice from a professional editor. Even a few paragraphs freely offered represent some of that editor’s valuable time. Also, nearly all of the authors I spoke to believed their revisions resulted in a stronger manuscript. That was certainly my experience — the revisions I made for my own R&R became part of The Rogue Retrieval.

So how do you tell if your R&R represents serious interest? Here, I have a suggestion: Ask the editor for a phone call. Admittedly, this is a big ask. But if he or she agrees, it gives you a chance to discuss the vision for your manuscript, some “face time” if you will. It also puts a voice to your name in the editor’s head, which is never a bad thing.

On the other hand, if the editor politely declines, well, then you have your answer.