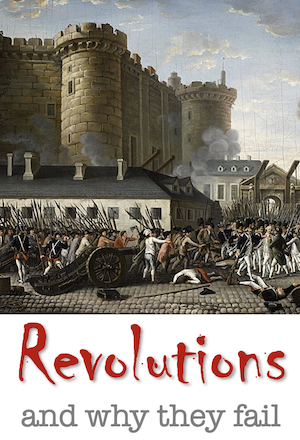 This article on revolutions and why they fail is part of the Science in Sci-fi, Fact in Fantasy blog series. Each week, we tackle one of the scientific or technological concepts pervasive in sci-fi (space travel, genetic engineering, artificial intelligence, etc.) with input from an expert.

Kate Heartfield is a novelist in Canada. She has a bachelor’s degree in international and comparative political science and a master’s degree in journalism, and she is the former opinions editor of the Ottawa Citizen. Her spring 2022 novel The Embroidered Book is a historical fantasy set in the lead up to the French Revolution. Her novel Assassin’s Creed: The Magus Conspiracy, set in the middle of the 19th century, comes out in August 2022.

On Revolutions and Why They Fail

Revolutions make great settings for fantasy or science fiction. They come with built-in conflict, big changes and important themes. And at first blush, the plot idea seems relatively straightforward: you have a government (usually oppressive) and a rebellion (frequently plucky) and the rebellion either wins by dint of sheer cleverness, bravery or virtue, or it doesn’t (which is when you write a sequel).

But of course, it’s not that straightforward, and many SFF novels go further and explore the messy questions that come with all revolutions, such as: Are there any good guys? What happens next?

For guidance in our world-building and plotting, we can look to history, which is full of revolutions, rebellions, revolts, uprisings and wars of independence. Every revolution is unique, but we can see some common tendencies and patterns.

We can also see that the outcome is rarely as simple as success vs. failure (and almost never depends on guiding a shot into the heart of a Death Star.) One of the most successful revolutions in history, the Haitian Revolution, achieved a great and lasting blow for freedom but could not solve all the problems created by colonialism and slavery in that country. The Revolutions of 1848 that swept Europe mostly failed in their immediate aims, but they had enormous effects on the politics and economics of the latter half of the 19th century. So the question for fiction isn’t just whether or not the revolution succeeds, but the ways in which it might fail.

Here is a series of questions to ask, if you’re writing a revolution of your own.

What are they fighting for?

It’s worth distinguishing wars of independence from other revolutions. When one territory fights to shake off the rule of another country or of an empire run from afar, it may not have to wrestle with entrenched interests and ideologies to the same extent as a domestic revolution. The cause of independence is a strong rallying cry, even if what comes afterward may be just as contentious as they aftermath of any revolution. A war of independence has home field advantage, and its goal may simply be to drain the ruling territory of lives and money until the war gets unpopular. It may succeed in its aims without unseating a monarch. It may also gain allies easily, since third parties will want to divide and weaken their rivals, as happened in the American Revolution. And self-determination is an easy cause to argue for among potential allies.

But a war of independence may easily be overwhelmed by a larger power, and potential allies may not see the cause as worth the risk, however sympathetic they may be in principle. The Tibetan uprising in 1959 is one example among many.

Economics are frequently a big factor in gaining popular domestic support for any kind of revolution. A population that has little to lose will take risks. Even if they can’t defeat the government militarily, widespread withholding of labor, disruption of economic activity and popular unrest can (sometimes) topple a government. And militaries have been known to switch sides.

The economic factors are sometimes more complicated than whether or not the people have much to lose. Corruption, cronyism, foreign connections among the elite, and stark inequality can also foster resentment. Those sorts of economic factors contributed to the Iranian Revolution in 1979.

Why and how did it turn into a revolution?

Many revolutions start out as frustrated reform movements or social uprisings focused on just a few policies or a single problem.

Imagine hopping into a time machine to the day of the Tennis Court Oath, June 20, 1789. Imagine telling the people involved they just started the French Revolution, which will result in the execution of the king, years of brutal internecine bloodshed, repudiation of the Catholic Church, long foreign wars and, ultimately, the crowning of a Corsican artillery officer as Emperor. Most of them would be shocked and horrified, even though serious problems had been building in French politics for years. In June 1789, the Third Estate just wanted a written constitution and a fair say in the governing of the country and the management of its finances. In fact, that particular day, they were mostly mad because they thought (mistakenly) the king had locked them out of the building where there was supposed to be a meeting.

Revolutions don’t typically happen overnight. They usually follow years of simmering resentments, chance events, government errors, and on-the-ground organizing. They often follow other, failed revolutions, because sometimes it takes a few runs at the tower to knock it down. The 1905 Russian Revolution is an important precursor to the 1917 Russian Revolution.

To go back to the importance of events for a moment: in his great podcast Revolutions, the author Mike Duncan points out how often revolutions hinge on a moment when a crowd has gathered, there’s tension between the people and the authorities, and inevitably, a gun goes off on side or the other, and everything changes.

When an uprising turns into a revolution, it starts making promises. Things are going to get better. They sure can’t get worse! Marginalized people may view these moments as opportunities to undo systemic oppression, but those systems don’t disappear overnight and may be built into the revolutions themselves.

Many great orators and charismatic figureheads of popular uprisings have benefited from the very structures that they’re promising to overthrow. But revolutions do also coalesce around people from the oppressed groups in society.

One way that revolutions can fail is in depending too much on one or two people, and they fall apart when those people are killed or turned by the government. Wat Tyler, the leader of the 1381 Peasants’ Revolt in England, took the revolt down with him when he died.

Revolutions typically draw on several different dissatisfied constituencies, who make common cause. It’s almost a necessary condition of a revolution, because taking down a government is hard, and the wider the base of the revolution, the more successful it is likely to be in making a real change.

But that means that most revolutions are pretty fractious, and those temporary alliances can break as soon as they’re put to the test of building the new government. When the old allegiances have fallen, to whom does everyone swear loyalty? Why, to the revolution, of course. The revolution becomes sacred, an end in itself. And all it takes to get rid of someone inconvenient is to brand them an enemy of the revolution.

The French Revolution pioneered this process of purifying itself to death. In 1794, Louis-Antoine Saint-Just defending the rounding up of enemies of the revolution by arguing that a republic consists in the destruction of everything that is opposed to it. He soon went to the guillotine himself, as did Maximilien Robespierre, who had argued that terror was not only necessary but good, that it flowed from virtue, which was love of the fatherland. That’s how a revolution made permanent can become brutal totalitarianism — if it doesn’t devour itself and make room for an emperor to take over. A revolution fails when it becomes the master of the people, rather than its servant.

Revolutions can also fail in quieter, less bloody ways. The government might make some concession or reform – a new constitution is a popular choice – and then once everyone has gone home and the danger has passed, the new constitution is overturned or ignored.

Or even if the revolution succeeds in replacing the government, the replacement might not be much better. More than a decade after the Egyptian revolution, the human rights situation in that country is dire. Sometimes a new government is better for some elements of the society and worse for others.

Revolutions are risky moments that come with no guarantees. But they are also moments of change, and of hope. The many revolutions throughout human history – even the failed ones – demonstrate that ordinary people can shake the foundations of power. Oppressive governments are never safe. And that is a story we should never stop telling.