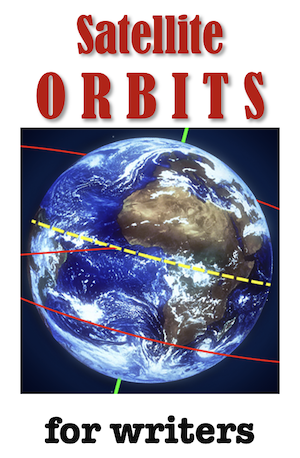 This article on satellite orbits in sci-fi is part of the Science in Sci-fi, Fact in Fantasy blog series. Each week, we tackle medical or technical aspects of science fiction or a historical / world-building topic of fantasy with input from an expert. Please join the mailing list to be notified every time new content is posted.

Adeena is a physicist and astronomer (by degree) working in aerospace as a Mission Architect, which just means she’s been doing it so long they had to give her a fun title. More importantly, she’s a long-time science fiction geek with a strong desire to inspire others through speaking and writing about robots, aliens, artificial intelligence, computers, longevity, exoplanets, virtual reality, and more. She writes science fiction novels, to include The Robot Galaxy Series and loves spending time with her fellow co-hosts of The BIG Sci-Fi Podcast (available wherever you listen to podcasts). You should visit her website.

“Standard orbit” is a phrase used frequently in a popular sci-fi franchise. Problem is, there is no such thing as “standard orbit.” But that’s okay. This is not a sin… maybe someone will define a “standard orbit” for spaceships one day.

But there are definitions galore for all the different orbits today and these definitions are more than words—they imply physical properties and capabilities and getting them wrong will take anyone who has a little knowledge about the topic right out of the story. The one I encounter most frequently, using the term geosynchronous improperly. Geosynchronous (often abbreviated GEO) has a specific meaning, so combining it with another phrase like “hovering 155 mi above earth” is a horrible sin.

You don’t need fancy math to get this right, just an understanding of the common terms and definitions. There is an entire field of Orbital Mechanics and I could write more than a book or two on all the terminology. In this article, however, I’ll cover the two most common words I hear in real-life and fiction that people outside of the aerospace industry (and a few inside) get wrong.

LEO standards for Low Earth Orbit. This means that your satellite or spaceship or space station or whatever object you’re writing about is moving around the Earth with an altitude of anywhere from 200 km to 2000 km. The potentially frustrating aspect when explaining this to others is that there is some flexibility in the definition. If you had a satellite orbiting in a circular orbit around Earth with an altitude of 2100km and wanted to call that LEO, no one would be too upset.

Likewise, if you had an eccentric orbit where the closest part (perigee or periapsis… don’t worry—we’ll explain that a little later) is at 200km and the furthest part (apogee or apoapsis) is at 4000km, you could also claim that this is a LEO satellite because the majority of time the satellite is in LEO. If that furthest part stretches out to 20,000km or 108,000km (like the exoplanet finding satellite, TESS), then it’s no longer considered LEO but HEO—Highly Elliptical Orbit.

The key term there is that the object is moving. Problems arise when someone uses language like, “The satellite hovered 150km above the city.” Um, no. At LEO altitudes, objects can’t do that. Not with current technology. Some very very very advanced technology that would essentially break the laws of physics would need to be invented to do that. It’s like saying an airplane can hover over a spot. An airplane can’t, but more advanced technologies like drones can.

Satellites that appear to “hover” over the ground *must* be GEO or Geostationary or Geosynchronous. GEO could stand for either of those two words, but those two words mean different things in the world of orbits. First, note the prefix “Geo.” Geo means Earth so for one, you can’t be in a Geostationary orbit around Mars or the Moon.

The prefix for Mars is “Areo” so if you’re there, you’re possibly in an Areosynchronous orbit. That’s such a weird word to utter out loud… I know I’ve caught a colleague once or twice saying “LEO” when referring to Mars. Yes, if this happens at work, I point it out and make fun. If it happens in fiction… if the character or narrator should know better, I grimace and face palm. If it’s say, a six-year-old making that mistake, then it could be cute and funny.

A “synchronous” orbit is one that moves with the planet. Earth takes 24 hours to make one rotation. An object in Geosynchronous orbit also takes 24 hours to orbit the Earth once. It’s “in sync” with the Earth’s rotation. Now here’s the really important part: you can’t place your object anywhere. It has to be at an altitude of 35,786km for this to work. (For more on the physics of all this, with lots of fun math, see here: https://physics.info/orbital-mechanics-1/   For one with more words, less math, see this link: https://solarsystem.nasa.gov/basics/chapter3-4/ )

So, please do not write, “The satellite was at a geostationary orbit at 500km altitude.” That’s 100% wrong. Saying your satellite is at a Geostationary or Geosynchronous orbit is telling your reader that it’s at 35,786km. Period.

A geostationary satellite has an inclination of 0deg. So if you are on the ground and looking up at it, it will appear to be stationary all the time.

A geosynchronous satellite has some other inclination and if you’re on the ground looking at it, in one day, it will appear to move north to south and back that many degrees. 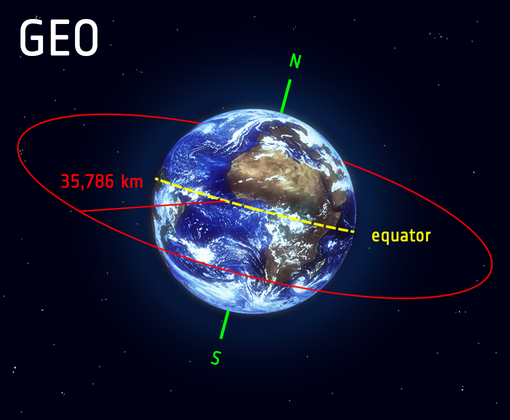 A couple of other things to be aware of so you don’t get caught by the people who know this stuff:

The first thing to know about the terms apogee and perigee is that they only work when you’re orbiting Earth. It says so in the name. “Apo” means furthest and “peri” means closest. But “gee” refers to the Earth. So if you were orbiting our Sun, the closest point in the orbit to the Sun is “aphelion” and the furthest is the “perihelion.”

Instead: “The spy satellite was in view of New York City for 6 minutes while it passed overhead.”

Don’t say: “Helmsman, put us in geosynchronous orbit around that strange planet.”

Instead: “Helmsman, put us in a planetary synchronous orbit around that strange planet.”

Don’t say: “While orbiting Saturn, the satellite readied to take pictures of the beautiful planet when it reached perigee.”

Instead: “While orbiting Saturn, the satellite readied to take pictures of the beautiful planet when it reached periapsis.”

Okay, none of those examples are award-winning prose, but hopefully they successfully illustrate how to use this terminology correctly without changing the meaning or what you’re trying to convey in your story.