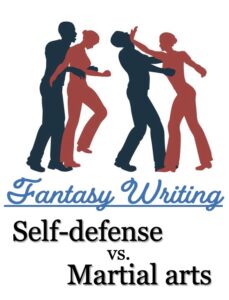 This article on self defense and martial arts is part of the Science in Sci-fi, Fact in Fantasy blog series. Each week, we tackle medical or technical aspects of science fiction or a historical / world-building topic of fantasy with input from an expert. Please join the mailing list to be notified every time new content is posted.

Ember began learning tae kwon do at age fourteen, and has been training in various martial arts ever since, earning a second-degree black belt in both tae kwon do and a first-degree black belt in Shaolin Kempo. During the day, they’re a software engineer, with a focus on accessibility and user-centered design. In their scant free time, they juggle running, climbing, larping, and, of course, writing. Their sci-fi and fantasy, as well as other nonfiction essays, can be found at www.emberrandall.com.

Self Defense Versus Martial Arts

There’s a difference between sparring and fighting to defend yourself.

The first time you come to a class at my current dojo, we’ll teach you a few basic punches, kicks, and blocks.  Over the next weeks and months, you’ll learn more kicks, stances, and your first form.  Maybe, depending on what instructors feel like teaching, you’ll do a bit of board breaking or weapons, and you’ll probably start learning the basics of sparring once you’re comfortable with a few basics.  All useful skills – necessary if you want to start on the journey towards black belt – but not all are necessarily practical. 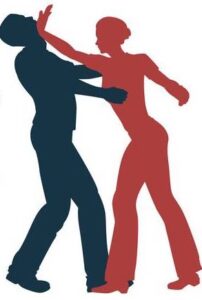 For your first self-defense class, on the other hand, you’ll usually start with ways to escape grabs, ways to squirm out of holds, and maybe one strike.  Probably a palm strike, since driving the heel of your palm into someone’s nose is likely to break their nose without breaking your hand.  (Trying to punch someone’s face, on the other hand, has a much higher chance of breaking your own fingers than injuring them severely.)  The skills, at least in the classes I’ve assisted with or taken, focus first and foremost on practicality – how can you best escape a bad situation without getting hurt?

Martial arts classes can also teach you that, but the arts I’m familiar with tend to encompass a much broader range of skills, some of which aren’t going to help in a real confrontation at all. The way we fight in the sparring ring is very different from the way you need to fight in an actual fight, at least if your goal is to get out of said fight as quickly as possible.

There’s a good reason for that – in the sparring ring, you usually like your opponents, or at least you don’t actively want to hurt them. Breaking someone’s knee, for instance, is not particularly nice, and you don’t want to permanently injure your training partners.  But, if you’re attacked on the street, you want to do as much damage as you can in a couple strikes, then hightail it out of there. I’ve got nearly 15 years of training under my belt, as well as a couple black belts, and the first thing I’m going to do if I’m ever unlucky enough to be in that situation is kick my attacker’s knee and run like hell. (Helpful hint – it takes seven pounds of force to break a knee. Knees are fragile.)

This is why, unless your protagonist is a martial arts master and is fighting against other masters, you probably don’t want the fight to go on for pages and pages. Real, trying-to-kill-each-other fights don’t tend to drag on. If your MC hasn’t gotten out of a fight quickly, they’re probably in a heap of trouble.

Self Defense: Getting Out of Trouble

That’s especially true if your MC is a woman (or perceived as one). There’s a reason most self-defense classes are targeted at women – the dynamics of a fight are different based on gender. Women will rarely be faced with the macho posturing in a bar that leads to a massive haymaker being thrown; they’re much more likely to be grabbed, pinned, or otherwise at a disadvantage when the need for violence becomes clear.  Unfortunately, size differential does matter, which is another reason for self-defense classes to teach quick, disabling strikes. Eyes, throat, instep are all great targets because they cause a lot of pain and can let you get out of a corner so you can run.

(As a note, groin is not actually a great target, because most people are very good at instinctively defending against a knee or foot to the groin. But bringing up your knee like you’re going to hit someone in the groin, then stomping as hard as you can on their instep, can be very effective, especially if you’re in boots or high heels.)

Those sorts of strikes are prohibited in most of the arts I’ve practiced – tae kwon do, karate, boxing, kickboxing, and jujitsu. Some of them do teach those moves, usually as a part of designated self-defense combinations, but said combinations can also be quite absurd at the more advanced ranks. I don’t care what the combination says, there is no way I’m ever going to try to break an attacker’s spine.

When you’re writing a protagonist who needs to defend themselves, as most do sooner or later, consider what they have or haven’t learned. One thing that both self-defense and martial arts classes help with is the instinct to freeze.  If you practice something over and over and over, until it’s muscle memory, you’re more likely to be able to do it in a high-stress situation. And, if you know how to push through the pain of being punched or kicked, you have a better chance of escaping. A protagonist who’s never taken a single blow probably won’t be able to ignore repeated punches to the gut or head, for instance. 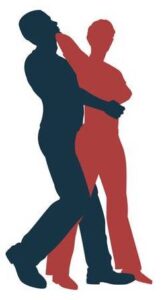 For protagonists who might have a bit more training or experience, they’ll probably fall back on their most basic skills. Those depend on the art – and, like I said, some arts don’t actually teach basics that are particularly good in a real fight. Tae kwon do, for instance, favors head-level kicks – great, if you can pull them off, but I don’t want to kick anywhere above the belt in a real fight, because there’s a good chance of someone grabbing my leg or throwing me off-balance. It’s too risky.  And I don’t fancy breaking fingers because I punched wrong in the heat of the moment. For me, the basics will be simple kicks, knees, and elbows, because they’re powerful and reasonably easy. And, because of that, they’re also what many self-defense classes teach.

Self Defense and Weapons

Now, all of this goes out the window if there’s a weapon involved. The very first thing every class I’ve taken has said, for self-defense involving weapons, is to give the attacker what they want. Phone, wallet, purse, doesn’t matter – goods are not worth your life. In a knife fight, the best you can hope for is to get cut in places that aren’t damaging; if a gun is involved, there’s a terrifyingly high likelihood of someone getting shot.

Given that your protagonist probably isn’t getting mugged just for their jewelry, they might have to fight anyway – getting kidnapped is obviously bad. But realize that no one, not even the best fighter, is likely to walk away unscathed once the weapons come out.

That’s true in a fistfight, too, but to a much lesser extent.  Bruises and strains are much easier to recuperate from, so, if you need your protagonist functional in the next scene, maybe stick to hand-to-hand. And consider having your protagonist treat running as a real option, or even the goal – it’ll certainly be mine if I’m ever forced to defend myself for real.