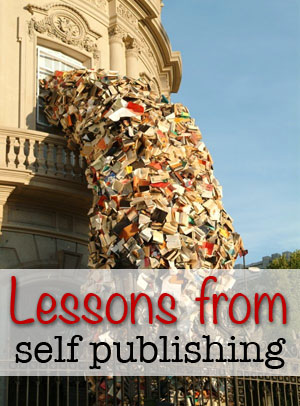 No matter how you feel about the changes to publishing in the past decade, you have to admit that it offers some new options to a would-be author. Before the rise of digital publishing in the late 2000’s, authors who’d written a book had essentially two choices for getting it published:

Now, in the digital age, authors have more choices than ever when it comes to publication. I previously wrote a post called Three Lessons from Traditional Publishing, in which I discussed some of the pros and cons of this publishing route from my position as a debut author. It seems only right to discuss some major points for the self-publishing path as well. Here then are some considerations for authors who want to self-publish a book.

In traditional publishing, authors first have to find an acceptance from major publishers, which is not an easy task. In signing a publishing contract, an author cedes control of many things — the title, cover design, format, and release date — to the publisher. Although the author can offer input on some of these things, the publisher gets final say.

One of the most appealing aspects of self-publishing, therefore, is simply control. That begins with the decision to publish the book in the first place. Traditional publishers are extremely selective about the titles they acquire, and many external factors — such as the size of the market, or a too-similar title already in the pipeline — can kill a manuscript’s chances at the acquisitions board. The most empowering aspect of self-publishing is the lack of a gatekeeper: anyone can publish any kind of book.

Granted, that’s a double-edged sword. No gatekeepers means everything gets in the gate, and most of it is crap. But I see no problem with letting the reader decide whether or not a book is “good enough.” I just hope the reader doesn’t think well, e-books are a waste of time and wander off to catch Pokemon.

Anyway, self-publishing does offer complete control over when and how a book is published. That’s appealing to a lot of people. I’m looking at you, type A personalities!

Of course, this also means that the author has to do the work — find an editor, write the cover copy, schedule a release date, etc. In self-publishing, the author serves as the “chief cook and bottle-washer” as the saying goes. It’s much like running a small business: you have a lot of freedom, but you also have to do most of the work yourself.

The royalties that major publishers pay to their authors are almost comically small. Industry-standard rates are:

When I say standard, I mean just that: this is what most traditionally published authors (not named Stephen King) are getting, agented or not. When a book sells, the publisher (and not the author) gets most of the money. Then again, before a book can sell, the publisher covers most of the up-front expenditures in the 1-2 years it takes to produce a book: editing, cover design, printing, warehousing, and (hopefully) promotion.

Self-publishing royalties seem luxurious by comparison: up to 70% when publishing with Amazon KDP. This, combined with the fact that the author can set the price, alter the economics of book marketing. Specifically, the higher royalty rates make it possible to use paid advertising — on Facebook, for example — to drive sales with a positive return. That’s virtually impossible for a traditionally published author.

However, before those sales can roll in, the self-published author typically pays up-front costs for editing, design, cover art, etc. These are vital to producing a market-quality book, but the costs are not insignificant (probably at least $1,000). On the bright side, self-published authors can release their book as soon as it’s ready, and begin collecting revenue within about 2 months.

3. The Greatest Threat Is Obscurity

Let’s be honest: no matter the type of publishing — traditional, small press, or indie — we as a community are publishing a crap-ton of books these days. In traditional publishing, most new books come out on Tuesdays (for reasons I don’t understand, that are probably archaic). So every Tuesday, blogs and review websites and social media explode with a pile of new releases. For every one of those, there are probably ten or a hundred indie-published titles.

The challenge for every author is to make his or her book stand out from this crowd. Traditionally published authors have a key advantage here: the backing, experience, and brand name of a major publisher. There is an understanding, in some circles, that the book has been selected on the basis of merits, vetted by industry experts, and also passed the gauntlet of a professional editor.

The value of having a major publisher’s brand depends almost entirely on who you ask about it. However, it’s an established fact that some doors of publicity and promotion are open only to traditionally published titles. Many book reviewers, awards lists, and high-profile bloggers won’t consider self-published books. Sometimes it’s elitism, but more often, I think this is simply a way to control the flood of requests. There are already more traditionally published books than anyone can read in a lifetime.

As I discussed in my post about traditional publishing, that route also promises delivering on an oft-whispered writerly dream: seeing their book on the shelf in an actual bookstore (better yet would be seeing their book on a prominent display, which is called “co-op” and must be paid for by the publisher, but I digress). If this is your dream, you need to find a major publisher. Indie authors have made little headway into brick-and-mortar bookshops, and that’s not likely to change anytime soon.

In theory, the marketing power and distribution channels of a traditional publisher give their authors a great advantage in this crowded market. However, marketing budgets and shelf space are not infinite, nor are they evenly distributed among all of a publisher’s titles.

Instead, the vast majority of support and attention are thrown at just a few titles. Maybe they’re from a bestselling author, or the editor thinks they’ll be a runaway hit. Or maybe the publisher just paid out a big advance and absolutely must make that money back. No matter the reason, these titles get most of the publicity and marketing, and the rest of the catalog gets very little. Thus, most traditionally published authors have to fight for publicity and review coverage and reader eyeballs, just like anyone else.

Importantly, self-published authors have a powerful ally of their own. This ally is a marketing juggernaut, and sells more books than its next several competitors combined. In the e-book format — which is where most new authors are likely to be discovered — this ally essentially owns the market.

This ally, of course is Amazon. Their flagship book marketing program, KDP Select, requires commitments that most traditional publishers won’t agree to. Thus, it’s a huge competitive advantage for the indie author. Enrollment in KDP Select provides access to several marketing programs, most notably Kindle Unlimited, in which Amazon Prime subscribers can read books for free. KU authors get paid out of a common pool based on the number of pages read. Borrows also help a book’s bestseller ranking in the Kindle Store.

It doesn’t take an algorithms expert to see the effect of KU borrows on book rankings. Just look at the top 20 list for almost any Amazon category.

There’s a reason why some of the most knowledgeable and successful indies, like Joanna Penn and Bryan Cohen are putting their new releases into KDP Select. The sales rank boost and visibility conferred by this program are unmatched by just about anything other than a BookBub ad.

In summary, there are pros and cons to self-publishing, just as there are for traditional publishing. Do your homework, and choose wisely.