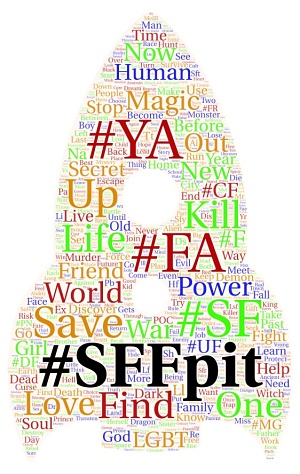 Yesterday Michael Mammay and I hosted what I believe is the 11th #SFFpit Twitter pitching event for sci-fi/fantasy authors. This was our first event in July since shifting it forward a month over the winter (mostly to avoid the December holiday).

The goal of shifting this event forward was to increase participation by literary agents, which has slowly declined over time. January definitely saw an improvement. I hoped we might see the same this time around, though summer is always a challenge. Half of the industry is on vacation or traveling to conferences.

Author turnout has never really been an issue. I send reminders to my e-mail followers and post to social media about a month in advance. The writing community offers a lot of word-of-mouth support as well (which I deeply appreciate). Granted, there are always a few people who show up on the hashtag having never heard of it, but we generally get the word out.

My website traffic in the days leading up to the event usually offers a preview of the turnout, and this week it was pretty convincing that people were gearing up for the contest. 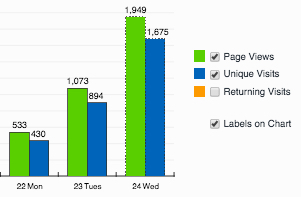 According to my analysis of 20,000+ tweets/retweets on the #SFFpit hashtag, we had 964 participating authors at yesterday’s #SFFpit. That’s a good turnout — about 100 more than January — though not quite a record (we had 1,024 participants last June). Adult and YA continue to dominate the age categories.

Strangely, the average tweet count per author was around 4.5x, whereas you’re allowed up to 10 tweets per project. I looked into this and found that about 400 authors only tweeted once or twice, at least according to the API. This could be a lack of awareness of the pitch allowance, but I suspect many would-be pitches are being rejected by the platform as identical tweets. According to Twitter’s TOS, identical tweets are not permitted. Both Twitter and some third-party platforms like HootSuite have been known to enforce this.

The hardest part of hosting #SFFpit is getting literary agents to participate. This is a weeks-long process for each event. Mike and I maintain a database of 50+ literary agents who represent sci-fi and/or fantasy in at least one age category. In the weeks leading up to the contest, we spend a lot of time updating that information (i.e. when an agent changes agencies or leaves the business) and searching for new agents to invite. We send personal invitations and reminders. Most of the agents who show up to make requests at #SFFpit are ones we’ve personally invited.

About 27 agents from 20 different literary agencies made requests in #SFFpit yesterday. Many of them were first-time participants, which is encouraging. Others are “old hands” at this, and in general they tended to make fewer requests. Whether that’s due to time constraints or a precaution against flooded inboxes, I couldn’t tell you.

By my count, at least 10 small/independent presses showed up in the feed to make requests. I think this is great, especially because the odds of getting a request of any kind in a Twitter pitching event are rather slim. We don’t go out of our way to invite any small presses, though that’s something Mike and I have discussed. As always, do your homework if you got a request from a small press (also see “Requests from Small Presses” below).

I’ll remark on some trends that I noticed during the event or afterward when I analyzed the Twitter feed. 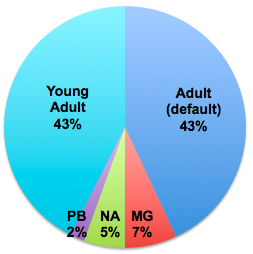 First, a breakdown of some of the more commonly used hashtags. Looking at age categories, young adult (YA) and adult (AD) were equally dominant, together representing over 80% of the pitches. A caveat to this is that if a pitch did not include an age category hashtag, it got lumped in with adult. I’m sure there are cases where this isn’t correct, e.g. protagonist is described as a twelve-year-old but the pitch is counted as adult because #MG isn’t used, so YA probably has an edge.

Middle Grade (MG) ranks a distant third at 7%, followed by New Adult (NA) at 5%. Picture books account for just 2% which isn’t surprising, as this event isn’t really designed for that category. 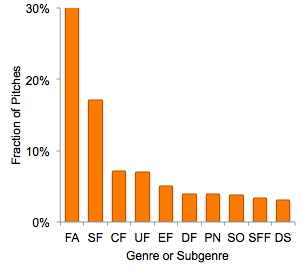 A wide range of genres and subgenres are represented, which is wonderful to see. Almost a third of pitches were labeled as fantasy (FA), the dominant category by a good margin. Next comes science fiction (SF) at 17%, followed by several fantasy subgenres: contemporary (7%), urban (7%), epic, (5%), and dark fantasy (4%).

I pay special attention to the literary agents who participate in #SFFpit. In the first few hours of the event, the feed was full of pitches but not many agents were openly participating. Activity tends to pick up around lunchtime or later in the afternoon. Of note, some agents drop in to like things hours or days after the event ends. I don’t discourage this, because agents are usually quite busy and I figure that most authors would rather have a late request than no request at all.

Now, time for some real talk. #SFFpit, like other pitch events and the query trenches in general, is very competitive. Just look at the math:

If agent requests were divided equally among pitches, your odds of getting one were about one in five. But we all know that’s not the way the world works.

Piling On: Pitches with Many Requests

There were thousands of pitches tweeted yesterday. The vast majority (over 90%) did not get a request from a literary agent. In other words, no agent request is the expected outcome. However, some authors had a pitch that performed very well. I noted 10 pitches that were requested by at least four literary agents (and I probably missed some). However, those 10 pitches alone captured 23% of all agent requests. This piling-on is not a new phenomenon for pitching contests. I believe there are a few key factors at play.

First, and most importantly, these authors wrote outstanding pitches. Here are two examples, both of which got at least 8 agent requests:

Plus-size warrior Arina flees her arranged marriage only to catch the alchemist groom running too. Now she must resist strangling the know-it-all prince and work with him to prevent war—or the home she hopes to reclaim will be destroyed.
WINNER’S CURSExSHE-RA#YA #FA #OWN #SFFpit

In a town where everyone has powers, Rose hides her illicit ability to “borrow” everyone else’s. But, when her new gf is blamed for murder, she must bend the rules to catch the real killer—even if it gets her banished #SFFpit #YA #F #LGBT #OWN

These pitches offer identifiable characters with unique conflicts. They make good use of comps and hashtags, too. I don’t claim to know much about the current market for YA books, but I’d imagine these are both very marketable. It’s not hard to see why they got requested.

These tweets have another thing in common: they were both tweeted before 8:30 a.m. yesterday and got a lot of likes (not just from agents and editors). This meant they were more visible under the default Twitter view, which is governed by an algorithm. That algorithm almost certainly favors engagement — likes, retweets, comments, etc — as well as timing. Thus, early tweets that garner attention from the wider community become more visible to agents.

It’s a useful reminder that your online experience is increasingly controlled by big technology companies, and there’s not much you can do about it.

I counted 10 small/independent presses whose representatives made requests during #SFFpit. Despite their modest number, they collectively made more than 400 requests, nearly double the number of requests made by the agents. Some telling statistics:

As you can see, most small presses who came liked A LOT of manuscripts. Heck, the three most-requesting small presses collectively requested more projects than all of the literary agents. This is not necessarily a bad thing. Requests are good. Validation is good. When I was pitching my work way back when, I got a couple of small press requests and it made me very happy. Even so, before you send your work to someone, do yourself a favor.

Arm Yourself With Information

Many people dream of becoming published authors. Only a small fraction of them will succeed at it in any measurable way. The supply of writers and unpublished manuscripts far outweighs the demand for published books. These are facts. Here’s another fact: there are bad people in the world.

There are well-documented examples of authors being exploited or victimized for financial gain. Look up “Author Solutions” or Darin Webb if you need some examples.

If you’re in doubt, ask questions. Talk to other authors. Mike’s DMs are open. My e-mail is open. Do your homework, people!

If you’re still chasing the dream in January, I hope to see you at the next #SFFpit.