This article on lowering the cost of space travel is part of the Science in Sci-fi, Fact in Fantasy blog series. Each week, we tackle one of the scientific or technological concepts pervasive in sci-fi (space travel, genetic engineering, artificial intelligence, etc.) with input from an expert. Please join the mailing list to be notified every time new content is posted.

Today’s expert is J.R.H. Lawless, a Newfoundland-born lawyer who grew up, lives and practices in Saint-Pierre-and-Miquelon, a set of tiny islands belonging to France, but located off the east coast of Canada. After dual Masters degrees in Political Science and Law from the elite French public administration schools Sciences Po Bordeaux and Sciences Po Paris, he worked for years as Secretary General of a Parliamentary Group at the French National Assembly.

With Douglas Adams and Terry Pratchett in his veins, J.R.H. completed his first novel manuscript as a stay-at-home dad in rural England, when the second of his three children was an infant, and has since developed multiple novel-length and short fiction SF works, with publications in SFWA pro-rate venues. He’d love for you to get in touch with him on Twitter!

I know what you’re thinking. What hydroponic hallucinogen is this guy smoking, and where can I get some? But bear with me for a moment, here.

First, the facts. On February 6th, 2018, the SpaceX Heavy Falcon launched from — and landed back onto, mostly — launch pad 39A at Kennedy Space Centre in Florida. 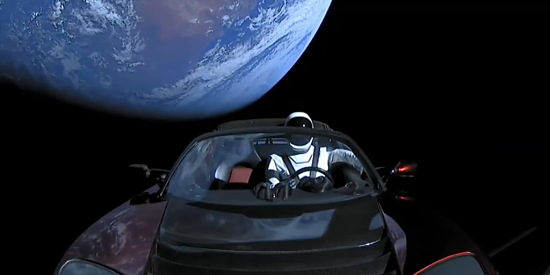 Hopefully, many of you guys ‘n gals watched the footage like we did, our family of five huddled around a laptop screen watching the live footage, cheering as the side boosters landed back down safely, tears welling as the cherry red roadster and its totally-not-a-body-that-needed-disposing-of “Starman” passenger launched free and set off on its course, puzzling over the persistent lack of info and footage about the failed landing of the central booster on the drone ship in the Pacific — but hey, as Paul Simon sang, two out of three ain’t bad.

All in all, it was 2018’s very own glorious little slice of moon landing pie.

An Eiffel Tower is big business

But after the music and the live feed of Spaceman rotating against the backdrop of the Earth eventually shut off, and the conference speaking points about the lowering cost of access to space are all said and done, what we’re left with is a necessary, and in itself useless, demonstration of a game-changing new technology — but worth its weight in unobtainium for the sheer coolness and PR value of the execution and communication surrounding it.

It is, in essence, the Eiffel Tower of our generation.

Indeed, when Gustave Eiffel and his company built the monumental tower that bears his name, as the entryway to the 1889 World’s Fair, he had to overcome all manner of practical challenges, not only due to the ground-breaking technology, but also legal challenges, the question of ownership, financing, public criticism — and even the obligation for the tower to be “easy to dismantle”, since it was scheduled to come down in 1909.

Today, nearly 130 years later, the Eiffel Tower is the publicly-owned crown jewel of France’s juggernaut tourism industry, and has cultural implications reaching down all the way to the core of the modern French Republic.

Take it from a Frenchman — an Eiffel Tower is big business. And where there’s business, there is also, irremediably, law.

Enter Starman and his Tesla Roadster, drifting through space 73 years from now, in 2091, the date of its next close orbit to Earth — supposedly passing in closer than the orbit of Earth’s own Moon.

Presume, for a second, that what is left then is still recognisable as a Tesla Roadster, and still, in a nutshell, damnably cool. Some of the organics may be degraded through cosmic radiation, there may be exposed plastics and yellowing windshields, and perhaps much worse, but still the Starman’s Roadster nonetheless.

After all, the rusted Eiffel Tower we see in Paris today would no doubt have horrified Gustave Eiffel when he unveiled his “expression of France’s gratitude” to the Enlightenment.

And perhaps, before or after 2091, some conservation-spirited benefactor will intervene to provide the SpaceX Roadster with magnetic shielding, or a coat of some other radiation protection, since it was not designed to be resist radiation at launch (quite the contrary, it was used to test the effects of near-Earth radiation).

The Long and Winding Road

But who could intervene to protect the Roadster, you ask? And why? Well, that’s precisely my point. If, in 2091, we don’t have enterprising space tourism professionals offering once-in-a-lifetime fly-by tours of the famous Roadster, then I will be severely disappointed in both the ingenuity and business sense of human-kind.

In any case, the question of who holds the rights to the Roadster as a cultural and tourism product, and who has the responsibility for its upkeep and protection, will inevitably become important, if it hasn’t already.

And it seems that the Roadster cannot stay a purely private matter — the burgeoning U.S. Space Law provides a bare bones framework for private enterprise in space, certainly, but there is nothing in there about cultural and touristic impact and rights. And regardless, the Roadster is no longer a strictly U.S. object — a bit like how Lady Liberty was built and sent across the ocean from France, but its tourism revenue certainly does not belong to France any longer.

The extraterritorial Tesla Roadster is the U.S.’, and humanity’s, gift to the Solar System. 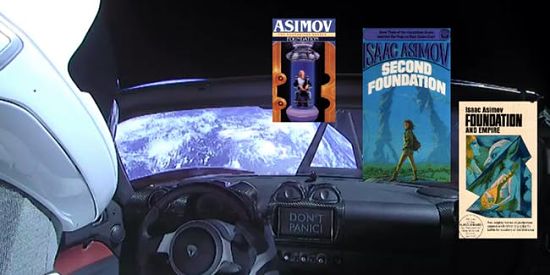 And the reader should remember that there are no copyright or intellectual property laws in space. Nor is there even the possibility, as it stands, of joint property and management of the Roadster and its cultural and tourism implications under international law. A UNESCO World Heritage-style management isn’t possible, here — and the World Heritage statute never removes ownership of the site in question from the country it is located in, of course, whereas the Roadster currently has no nation other than the Solar System itself.

This Roadster situation is closer to that of the Titanic, a wreck to which certain corporate entities have limited salvage rights, recognised in individual countries alone, but which is nonetheless subject to “admiralty law”, with no private or national ownership, or jurisdiction whatsoever.

And the Roadster isn’t even in a seabed, more or less close to countries which could claim tourism rights (I grew up about 650 km from the wreck site, just about as close as you can get, so maybe I have a claim on the Titanic tourism income?).

Now, I don’t know about you, but I don’t see how such a political entity could function and exist over interplanetary distances other than as a dematerialised, direct democracy, with a clear division between what is decided at the local, “national”, regional, planetary and interplanetary levels. Some issues — such as the Roadster — can only be resolved at the interplanetary level, and the distances and communications lag involved make traditional representative democracy even more unwieldy than it is in present day nation-states. That is what Musk himself hinted at just a month after the Roadster launch at SXSW 2018, where he said that:

“Most likely, the form of government on Mars would be something of a direct democracy […] where people vote directly on issues instead of going through representative government.”

The Roadster is just one relatively humorous — and above all else amazingly cool —illustration, but every step of humanity’s progress into the Solar System, and beyond, will be inextricably tied to the legal and political ramifications that only Space Law can anticipate and, hopefully, provide for.

So ride forth, you brave, totally-not-the-decomposing-body-of-someone-Elon-didn’t-like Starman!

By the magic of Space Law, the future of humanity rides with you.