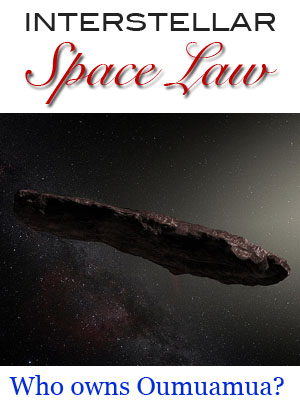 This article on interstellar space law is part of the Science in Sci-fi, Fact in Fantasy blog series. Each week, we tackle one of the scientific or technological concepts pervasive in sci-fi (space travel, genetic engineering, artificial intelligence, etc.) with input from an expert. Please join the mailing list to be notified every time new content is posted.

Today’s expert is J.R.H. Lawless, a Newfoundland-born lawyer who grew up, lives and practices in Saint-Pierre-and-Miquelon, a set of tiny islands belonging to France, but located off the east coast of Canada.

He is also a multiple award-winning Canadian SF author who blends comedy with political themes — drawing heavily, in both cases, on his experience as a lawyer and as Secretary General of a Parliamentary group at the French National Assembly. His short fiction has been published in many professional venues, and his first novel, Always Greener, is coming out in February 2020 from Uproar Books. He would love to hear from you on Twitter, over at @SpaceLawyerSF!

The mysterious, possibly pancake-shaped interstellar visitor to our Solar System, dubbed Oumuamua, has captured our collective imaginations since its discovery in October 2017.

The first of its kind, Oumuamua not only sparked much speculation and scientific debate about its origins and composition — most notably following the November 2018 paper which advanced the possibility of an artificial and technological explanation for Oumuamua’s observed motion. It also literally changed the rules, forcing the International Astronomical Union to create a new classification for interstellar objects, I, of which Oumuamua is the first.

While we science fiction writers may shed a silent tear that the object was not, as some originally proposed, named after Arthur C. Clarke’s Rama, Oumuamua is clearly a game-changer for our world-building and our plots, opening up vast new fields of credible, science-backed possibility.

And just as it has already changed the IAU naming rulebook, the reality of interstellar visitors to our System raises questions and has inescapable consequences all throughout the future societies we so lovingly craft and explore.

This System Ain’t Big Enough for The Two of Us

The most immediate Space Law ramifications of interstellar visitors like Oumuamua are purely local.

First off, who owns Oumuamua, and who has a right to derive any sort of benefit from it? This is a very real and very practical question.

Oumuamua will be in our Solar System for another projected 20,000 Earth years — and it’s already on the second half of its journey around these parts, on its way back out. So not only is there PLENTY of time for humanity to find novel ways to profit from Oumuamua, but there’s also a high likelihood that more interstellar visitors will be identified, and sooner, with perhaps 40,000 or 50,000 years for humanity to interact with them, before they even cross Earth’s orbit.

Already, multiple plans are taking form for a flyby investigation of Oumuamua itself, ranging from a 2021 Falcon Heavy probe launch to a Breakthrough Starshot technology-driven mission. But since Oumuamua is not part of “our” Solar System, but originating outside of it entirely, which law is applicable to govern the exploitation of the findings, and any benefits thereof? Who gets to organize and charge future tourists for Oumuamua “flyby” sightseeing, and what rights do they have to pay to do so? 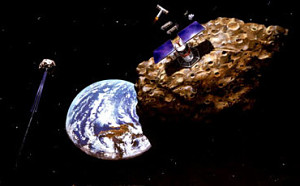 And second, do we even have a legal right to approach interstellar entities such as Oumuamua at all? The legal framework surrounding operations at the edge of Earth’s orbit is already shaky enough — essentially non-existent to date, in any practical, day-to-day sense. Asteroid mining, for instance, isn’t even as well-organized in its current legal state as deep-sea exploration and exploitation in international waters back on Earth — and that’s currently considered the property of all nations, heavily restricted and managed, at least nominally, for the benefit of all mankind.

But how can any legal framework, even that hypothetical and tenuous, ever be applied to an interstellar body like Oumuamua? You might as well say that the UN Convention on the Law of the Sea applies to the subglacial oceans of Enceladus, the methane lakes of Titan, or whatever alien seas might fizzle on the surface of Proxima Centauri b. Perhaps, from our human legal point of view, interstellar objects could have a protected status similar to Antarctica back on Earth?

Maybe, but any future plans must also take into account that, unlike Antarctica, interstellar objects like Oumuamua might well come knocking on our planetary doorstep — with or without any hypothetical stellar neighbors coming along with it to visit.

Stranger in a Strange Law

The question of Oumuamua as an artifact of intelligent, other-stellar life may seem roundly dismissed in the current state of scientific debate, but the legal ramifications of artificial constructs belonging to other life forms and arriving into our Solar System merit discussion.

If we are faced with an artificial construct, then it was unquestionably built by some”one”, an entity that under our current legal framework would theoretically be recognized as entitled to property rights.

This brings the question highlighted earlier to an even greater level of importance: do we have any legal right to interact with an object clearly belonging to entities we cannot communicate with — in the present scenario at least — and have no way of obtaining consent from?

And even if we remain within the framework of a purely natural phenomenon, what happens when an interstellar visitor inevitably interferes with human activity in our own Solar System, be it on or around Earth or Mars, in the Belt, or on the moons of Jupiter or Saturn?

Once again, until last year, there wasn’t even an official category to name interstellar objects like Oumuamua. It isn’t legally a comet or an asteroid. Do you think there’s a single insurance policy in the System that covers “Act of interstellar pancake”? Think again.

Space is weird, and through the magic of space law, it’s getting weirder and weirder by the day. I for one can’t wait for the day when law students around the System spend hours scratching their implant-laden heads, trying to figure out where the hell this “Oumuamua Jurisprudence” came from, and how to insert it into their latest course essay.