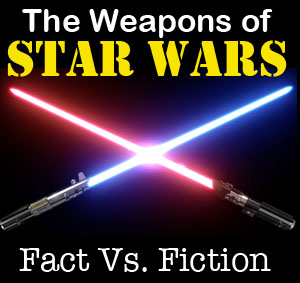 With the recent release of Star Wars: The Force Awakens, many YouTube videos have surfaced professing that the video’s creator has made a real lightsaber. However, if you watch the video, you discover that what was created was actually a glorified blowtorch, complete with the long, narrow, blue flame. The lightsaber portrayed in the Star Wars films is a sword constructed from a laser beam — it’s made of light, hence its name. 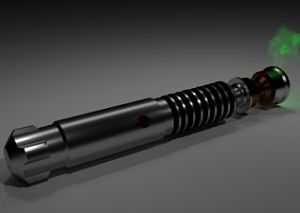 So is it possible to create weapons from light? The answer is yes and no.

If your objective is to slice through an opponent using only a beam of light, then you will be pleased to hear that the laser technology already exists and is commercially available. Lasers have been used to cut high density materials, such as diamonds and metal, since the 1960s. In the 1970s, laser cutting technology was put to use to cut titanium for aerospace applications. However, the power requirements for laser cutting is enormous. Just cutting 6.4 mm (0.25 in) thickness of plywood requires a laser of 650 Watts. Laser surgery, commonly used in eye surgery, uses a 1000 Watts laser, minimum.

For a laser beam capable of slicing the nose from an X-wing fighter, the power-generation unit would need to be the size of a tank based on current technology.

However, with recent developments in power generation, weapons such as laser cannons and laser rifles, the ones like the Storm Troopers used, are not out of reach for our current level of technology.

In 2014, the US Navy experimented with a ship-mounted laser-weapon system (LaWS) to target small boats and UAVs with promising results. In 2013, a variety of videos appeared on YouTube comparing the performance of laser rifles with projectile rifles. At the time, the laser rifle was lethal to a stationary balloon. A moving target, on the other hand… 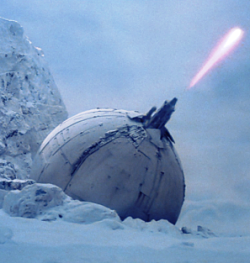 The issue with the laser rifles back in 2013 was the duration of time to charge the system to generate enough power for a kill shot. Our level of understanding of power cells and fast-charging systems has dramatically improved since then, thanks to smart-phones and tablets. It wouldn’t surprise me if in the near-future that weapons like the phaser pistol that Han Solo sported on his thigh become a reality.

But what about the lightsaber? Even if the power generation issue was solved such that the unit could easily fit in the palm of the hand, making a laser beam into a sword still would not be possible. Cutting down the enemy is only one requirement for a sword. A sword must also block the strike of another swordsman. No matter how hard you try, a light beam would never be able to stop another light beam.

However, a laser beam could potentially stop something with mass, but at this stage, only by burning it to a crisp and blowing it up. While it is possible that two crossing light beams could interact with one another, depending on the properties of each beam, their level of interaction would not stop the beams passing through one another. Dare I say it, even the glorified blowtorches that people have fashioned to look like lightsabers would have no hope in stopping the beam from another lightsaber.

Let’s for a moment assume that the lightsaber’s blocking capabilities come from the force that flows through all things. The lightsabers portrayed in the movies have a visible beam that is approximately 1 to 2 meters long (1 to 2 yards), depending on the design employed. Beyond this range, the lightsaber appears to be harmless, either that or the Jedi would frequently be cutting holes in the ships that they are standing on. There are two things wrong with this picture.

First, light travels faster than the human eye can process. As such, to see the beams from lasers, one of two things has to happen: either the photons from the laser interact with particles in their path, for example dust or ionizing atoms; or a long exposure image is taken using an exposure time beyond the capabilities of the human eye.

Second, any photon emitted from a laser will continue along its path until stopped by some energy-absorbing material. You can not generate a laser beam with a finite length stopped only by clear air. Those photons need to interact with the surrounding air particles in some fashion, often resulting in a flash of light concentrated at the point of interaction. To render a high-powered laser beam harmless after a short distance, traveling through only air, one would need to employ another science fiction method to either teleport the light photon to the start again, or bend the beam back upon itself with a micro-singularity.

At the end of the day, only the laser cannons and phase pistols are viable weapons from the Star Wars franchise. The lightsaber? Let’s just leave that one for those who are strong with the force.