Locus Magazine is the trade magazine for the science fiction & fantasy field. Each year, they conduct an in-depth reader survey that provides a glimpse of the evolving SF/F market. To their credit, the good people at Locus provide dozens of detailed tables tracking not only the respondents’ answers, but the results of previous years. As readers of this blog know, I am pathologically incapable of seeing good data relevant to the SF/F world without digging into it. These figures are from the survey published in issue #703 (August 2019).

In 2019, the circulation is 3,600 and 837 survey ballots were returned. Interestingly, only 32% of those claim to be Locus subscribers and the rest are readers who are obviously familiar with the magazine. The majority are college-educated homeowners. Just over half are married. The median age is 45 years old.

Of note, around 60% of respondents chose “Writer/Editor” as their primary or secondary occupation. In other words, most people taking the Locus survey are stakeholders in the SFF industry, either on the creative side, the editing side, or both. This isn’t terribly surprising, since it’s a trade magazine. Also as expected, 83% of respondents said that SFF forms the major part of their pleasure reading. Thus, it’s reasonable to assume that the 837 respondents offer a representative sample of the SF/F readership, albeit one that leans a bit toward the traditional publishing industry in the US. 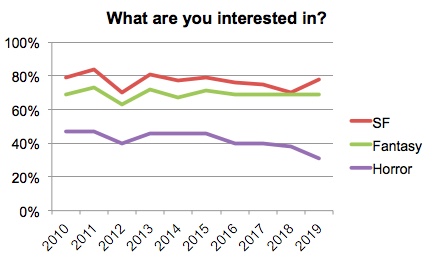 There’s nothing too exciting or surprising here: readers have a slight preference for sci-fi over fantasy. Both are far more popular than horror, at least with this audience. Horror seems to be dropping off a little in the past couple of years. The survey captured further data on some subgenre preferences within SF and fantasy. However, only a few subgenres were tallied, so I didn’t find the answers especially useful.

Now that we understand the interests, at least broadly, let’s delve into the buying habits. We know most respondents read SFF. Let’s examine how many books they buy per year in different formats: 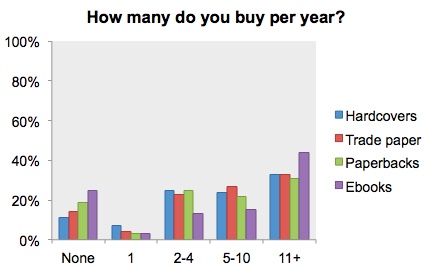 Note, the above figure combines responses to four separate questions, each in the form of “How many X do you buy per year?” where X is the book format. This probably skews the responses a bit high. About a third of respondents are buying at least one book in each format per month. A lot of people are buying hardcovers — 33% claimed to buy 11 or more hardcovers per year — which I find a bit surprising, because hardcovers are expensive.

The next logical question: where are readers buying those print genre books? 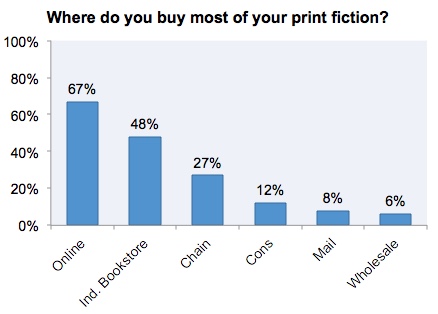 Consistent with numerous market studies and reports, two-thirds of print readers buy their books online. Nearly half of respondents also reported buying at indie bookstores, which is fantastic. Some 27% are shopping at chains, which (believe it or not) is up from 26% in 2018 and 21% the year before that.

Digital book formats — ebooks and audiobooks — have transformed the industry in many ways. In the tech-savvy SF/F readership, a rapid adoption would be expected. First, let’s look at the e-book readership year-to-year. The numbers don’t go back quite far enough to capture the initial e-reader craze, but they’re still informative: 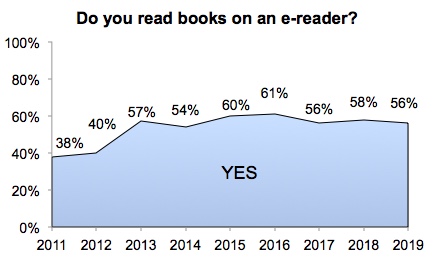 Reading on dedicated e-readers has hit a plateau at around 60% and leveled off. Since then, it’s slowly been declining. However, I think technology is a major factor here. SFF readers love their tech, so there was rapid adoption during the e-reader phase. Over time, as other multi-purpose devices (tablets, iPods, smartphones) improve, the readership using dedicated e-reading devices is slowly dwindling.

Of course, it’s still a comfortable majority. I know they’ll have to pull my Kindle Paperwhite from my cold, dead hands.

Let’s delve more into the digital book formats: ebooks and audiobooks. Here’s how many people buy at least one per year. We’ll call these the digital adopters: 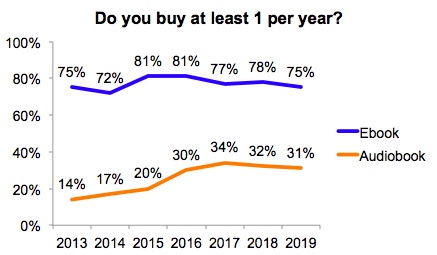 In the current survey, 75% of respondents are buying e-books. That’s a solid majority, but it also happens to match the figure from six years ago (2013). In other words, e-book adoption has hit a plateau. Everyone who is going to adopt e-reading has done so already. In fact, some folks are shying away.

The orange line shows audiobook buyers. At first glance, it looks like the format also saw a peak with a slow decline. However, look at the starting and ending values: from 2013 to 2019, the proportion of audiobook adopters has more than doubled (14% to 31%). The slight decline in recent years is a bit puzzling, and I wonder if some readers are being lured away to subscription services.

Next, let’s examine a similar plot but for respondents who buy at least five ebooks or audiobooks per year. These are the so-called whale readers who drive much of the economy in genre fiction:

The Growth of Audio Books

Anyone paying attention to the industry knows that audio is the fastest-growing format — and currently a major profit center for traditional publishers and indie authors alike. We see that playing out here. Whale audiobook buyers have grown slowly but steadily year-to-year, such that 22% are now buying at least 5 audiobooks per year.

The price points are relevant to consider here, especially when it comes to whale readers. You can buy 5 ebooks a year for $5. To buy 5 audiobooks a year usually costs you at least $100. That steady growth helps me understand why publishers are investing so heavily (and earning so handsomely) in audio formats. Incidental side note, this also explains why virtually all major publishers want audio rights when they offer book deals.

The Decline of E-books

One thing you might have noticed in the year-to-year plots above is that the proportions of ebook adopters and whale readers peaked in 2016 (when 81% were adopters, and 67% whale readers). It is no coincidence that by early 2016, all major publishers had negotiated new contracts with Amazon which allowed them to set higher prices for ebooks. Which they eventually did. In response, Amazon began deeply discounting the print version of those books, which moved readers to those formats instead. It wasn’t the “rebirth of print” as some claimed; it was the movement of price-conscious consumers.

The market’s intolerance for high ebook prices is nicely captured by this survey, which asked respondents how much they generally pay for ebooks: 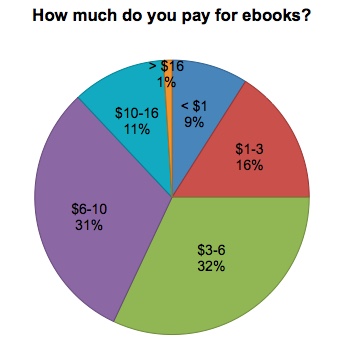 An appreciable fraction prefer to pay $3 or less (25%) which is easy to do if you’re patient (or not picky), as e-books are frequently discounted to this range during temporary promotions. However, the most popular price point for SFF e-books is $3-6 (32% of respondents), followed closely by $6-10 (31%). The important lesson here is that only a small minority of readers (12%) routinely pay more than $10 for e-books.

E-books have fundamentally changed the publishing business model for a number of reasons, one of which is distribution. Any online retailer can sell e-books at a competitive price because digital files cost basically nothing. Also, because of price matching at many retailers, it’s difficult for one to offer a substantially lower price than the others. Even so, look at where survey respondents buy their e-books: 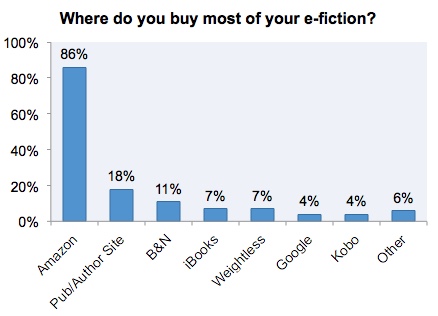 Amazon is the dominant ebook retailer by a huge margin, with 86% of respondents reporting that they buy ebooks on the site. Most people are aware that Amazon has most of the ebook market, but seeing it here in this demographic is a stark reminder of their power. The other ebook retailers, including those run by major tech powerhouses (iBooks, Google, and arguably Kobo which is now owned by Rakuten), have less than 10% of the market.

Pub/author site was reported by 18% of respondents, though I really wish this were broken down. Honestly, my experience in trying to buy ebooks directly makes me think this number is artificially high. If any of you have positive experiences buying ebooks direct, I’d love for you to share in the comments section.

The main observations from the Locus survey results reflect what other, larger studies have revealed about the book market as a whole, namely:

I encourage you to read this month’s Locus and peruse the survey results on your own. Maybe you’ll have additional insights to share.