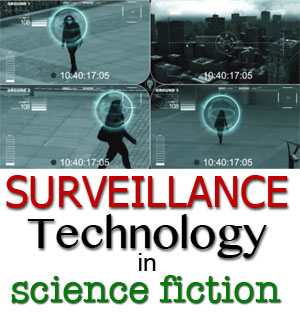 This article on surveillance technology and privacy is part of the Science in Sci-fi, Fact in Fantasy blog series. Each week, we tackle medical or technical aspects of science fiction or a historical / world-building topic of fantasy with input from an expert. Please join the mailing list to be notified every time new content is posted.

Ember Randall is a software developer for Google, specializing in user-centered design and accessibility. Everything they say here is their own opinion – they do not speak for their company on this or any other topic. (Editor’s note: you might also enjoy their article on machine learning for writers).

In their free time, they run, climb, larp, and write sci-fi and fantasy. They can be found at www.emily-randall.com.

Imagine a world where every movement is tracked, every internet search logged – even your coffee maker keeps track of how many cups of espresso you make every morning. Is that science fiction, or reality?

The answer is a bit of both. The amount of information out there about you is rather astonishing – that’s why the EU has passed laws like GDPR and Right to be Forgotten. And incidents like the Cambridge Analytica scandals make it clear that such laws are necessary to prevent abuse of personal data.

But science fiction has been exploring such topics long before the tech became a reality. From the seminal 1984 to modern books like Little Eyes, authors have proposed some rather terrifying visions for the future – visions that, in some cases, are coming true.

Even less-terrifying futures need to grapple with questions about privacy, though. And, to do that, it’s important to understand what currently is – and isn’t – possible.

Even today, what is theoretically possible is pretty scary. So, if you’re writing a dystopia, it’s simple: the government can and should know basically everything. Think:

The government could even turn off the internet for the whole country if they wanted. (Some countries are vulnerable to this now, as a matter of fact.)

In this kind of world, you don’t install anything that doesn’t come from the government; you don’t do anything that the government doesn’t know about. If your protagonists are going to get around the controls, they’ll probably have to use old-school methods, not fancy hacking – after all, where would they learn to hack? But methods like steganography might still work, or using tech like radios that have long since been abandoned. And, even in a highly advanced society, humans will always be the weakest point – it’s easier to trick/coerce/convince someone to give you their password than it is to hack the password-protected system.

If your protagonists do try to hack into something, realize that the vast majority of exploits leave traces – bugs like Spectre and Meltdown are terrifying partly because they leave no trace whatsoever. For instance, in China today, you can get around the Great Firewall, but it will be detectable. The government may not care that you’re doing it, but they do know. Your protagonists may be able to rely on security through obscurity for a while, but that’s not a solid strategy in the long run.

Katniss discovers that the tree contains a camera. The Hunger Games, 2012

Of course, you might have a world like The Hunger Games, where the surveillance is concentrated in certain parts of the nation. I don’t personally see that as very realistic – most modern laws designed to control behavior are targeted first and foremost at the most disenfranchised, while the wealthy and elite operate under less-restrictive standards. And, if a government wants the kind of total control that most dystopian governments do, allowing a large segment of their population to escape surveillance is counterproductive. But it is a trope that crops up, and it can give your protagonists more leeway in what they do when not under the government’s eye.

In non-dystopias, the situation gets more interesting. The same technology probably exists – both corporations and governments have a lot of incentives to learn more about people by any means necessary. But there are likely to be laws preventing some uses of the tech, as well as technology developed to accomplish certain goals without violating privacy.

For that, take contact tracing as an example – right now, society has a clear need to know who is infected and who they’ve come into contact with. But the obvious way to do that – log everyone’s movements – isn’t the only way. Google and Apple together came up with a design that traces the encounters of people without ever actually knowing their location – basically, phones would send out and record encrypted signals, and could then be notified when signal x was marked as infected. No one – not Google, not Apple, not the government – would know who the people were or where they’d been.

In a world where the laws govern what can and can’t be done with personal data, you’re likely to see more systems set up like that, and fewer set up in ways that create massive privacy issues. But you’ll probably see some of the latter, too – and they might even be perfectly legal.

Consider Down and Out in the Magic Kingdom – every person in that society has a social valuation, which is basically a measure of how much esteem others have for them. Although it’s never clear exactly how that value gets updated, some rather sophisticated surveillance systems must be in play, as well as human-generated ratings.

In that, it’s not too dissimilar from what China is doing today with its social credit score. But citizens in China have no way to opt out, and neither do the folks in Down and Out in the Magic Kingdom. What would a society look like that did permit that? Would there be a law like Right to be Forgotten, or would a person’s record follow them forever? What would be considered a permissible addition to someone’s social credit score, and what would be disallowed?

For something like that to work, the government is probably going to be in charge of most of the tech, or at least the tech needed to run the valuation system. But, in some worlds, that won’t be the case. Given the current power of big tech companies, it’s easy to envision a world where corporations, not the government, control the vast majority of the tech and the data.

An example of that is The Murderbot Diaries. In Murderbot’s world, everything that happens in a Company-leased habitat is recorded, and everyone knows it. But, because the company is entirely, amorally profit-driven, that data is used to serve ads and promote various products, rather than used to maintain a system of social control. That doesn’t make it good – ads can be creepy today, and a system like that would only make them creepier – but it changes the dynamics of the society. Someone still knows virtually everything about you, but what do they want to do with the data? Who else has access to said data? Will the corporations sell it, or treat it as a trade secret?

And, of course, there very well may be laws governing what those companies are allowed to do. Maybe a company is allowed to collect as much data as they want, but restricted from selling it; maybe they have to delete someone’s data when asked. Maybe they are only allowed to collect certain forms of data, to prevent bias – how well do companies follow that law? Do they collect other forms of data that can give clues about the protected forms, like gender or sexual orientation or race? That’s one of the big problems with Big Data today – even if the training data for a machine learning model is stripped of explicit identifiers like gender, the model can still learn sexist ‘rules’ like “women are more likely to be secretaries, men are more likely to be CEOs.”

It’s important to remember, though, that sometimes the worst dangers come, not from corporations or state actors, but from ordinary people. Doxxing, the practice of hunting down and publishing private information in order to harass and threaten someone, is routinely employed by the alt right today against people they don’t like. It can even turn deadly, either when targets commit suicide or when doxxing turns into swatting (making a false police report in the hopes of getting SWAT to break into someone’s home, often shooting them in the process.) 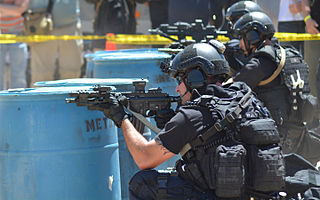 The more information available, the easier it is for doxxers to make trouble. Eric Smith’s YA novel Don’t Read the Comments is one of the few books I’ve found that deals with the effects of doxxing, and he gets it scarily right. The tech in that book is basically present-day – think of what might change if the harassers had access to more information.

But a futuristic society doesn’t necessarily imply more easily-available data. If you’re writing a society that isn’t intended to showcase the worst possible future, the social aspects of the technology are going to be just as important, if not more so, than the actual tech. What is allowed, and what isn’t? What are the penalties, and who enforces them? What can ordinary people do, know, or find out?

Most technology can be used in both beneficial and harmful ways – the choices of the society, government, and corporations will determine which is more prevalent.