Today I’m hosting a guest post from Arianne “Tex” Thompson, whose western-inspired-fantasy debut novel One Night in Sixes comes out this week from Solaris. She wanted to talk about how even the best works in fantasy get one-star reviews.

Whenever was working on my novel and felt discouraged or just needed a break from sweating blood into my keyboard, I loved to look up scathing reviews of bestselling books in my genre.  Not to reassure myself that everyone gets bad reviews.  Not to study the mistakes of other authors and learn from them.  Just because reading one-star Amazon reviews is like drinking Gelfling essence, and there’s a nasty little worm in my soul that feeds on schadenfreude and partially hydrogenated soybean oil.

If you were wondering, here’s the one-star consensus for a few recent classics of epic fantasy (opinions of others, paraphrased by me):

Patrick Rothfuss’s The Name of the Wind: adventures of the Ascendant God-King of the Mary Sues

Anyway, I wrote and re-wrote and researched and sweated and cried, and when the marvelous happy day came, I got an email from Jonathan Oliver, the Benevolent Editorial Overlord of Solaris Books.  I don’t need to go back into my inbox to reproduce this part of it, because his words have long since been seared into my heart:

Firstly I want to say how thrilled I am to have One Night in Sixes and its sequel for Solaris. This drew me in like no other fantasy since The Malazan Book of The Fallen. Like Erikson I love that you world build by just plunging the reader in and letting them find their way. This is much how I prefer epic fantasy. Also, this is just remarkably strong for a first novel; a real treat to read.

Didn’t see that one coming!

And you know what?  I’ve had a pretty good gamut of early reviews so far.  Some people love One Night in Sixes, at least one person hates it, and several people are in between.  More importantly, pretty much all of them are saying the same thing: this book has a big, intricate world, with multiple languages and new words and a big cast of characters, and it picks up speed quickly.  Sometimes that’s a dealbreaker – and as I learned from my editor, sometimes it’s literally a deal-maker. 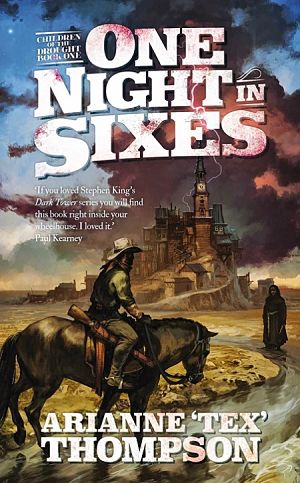 Here’s the funny thing, though: I never for a second thought that this would be a primary point of contention.  I thought people would get interested in the fantasy Western setting, and the “culture magic” system, and the different characters and their conflicting goals.  At no point did I twirl my moustache and think, “ha-HA!  THIS will confuse the dickens out of them!”  I certainly didn’t think, “Yes, I will dazzle them with nuance and complexity, and they will revere me as their queen!”  It was more like an obsessive, terrified mantra. “Don’t be boring.  Don’t be boring.  Your reader’s not an idiot.  Don’t talk down to them – they can smell condescension a mile away.  Keep it snappy, Tolstoy.  And for god’s sake, don’t be boring.”

So I guess what I’m saying is, no matter how hard you work or how much criticism you read, I don’t think you can ever be completely sure what people will love about your story.  But if it’s the same as what people hate about it, you’re probably doing something right.

Tex Thompson is a “rural fantasy” author and editor for the DFW Writers Conference. Look for ONE NIGHT IN SIXES, the first book in her epic fantasy Western series, on July 29th – and find her in the meantime at www.thetexfiles.com and on Twitter as@tex_maam!