I recently returned from the Las Vegas Writer’s Conference, where I had the pleasure of serving on the faculty alongside about a dozen editors, agents, and fellow authors. I don’t go to many events of this kind, but I really enjoyed it and thought I’d share some of the highlights.

An Invitation to Vegas

So how did I slop my way into an invitation to teach at the LVWC? Interesting story.

This is Joe, who chauffeured many of us to/from the airport. And guess what? He’s a romance author.

On my contact page, as some of you know, I encourage people who’d like to get in touch to do so by e-mail. I state that there are bonus points for a witty subject line (that’s how I tell you from spam). The results are hilariously entertaining. But sometime last year, I got an e-mail with the subject The write kind of trip to Vegas.

It caught my eye for obvious reasons.

The message came from Jenny Ballif, A.K.A. Science Mom, who was organizing this year’s LVWC and wanted to know if I’d like to be on the faculty. I was pretty excited. They wanted me to be a teacher! I’d begun to gain some recognition in the community.

About damn time, I thought.

Sometime later, I learned that that they’d invited my agent Paul Stevens to LVWC and they needed one of his clients to be there for an author-agent relationship panel. I was just the nearest warm body.

A Cozy Venue in Vegas

There were 150 full time attendees at LVWC, which is a great number. It’s easier to meet and get to know people. I find the experience far more rewarding than what I’ve encountered at large conventions. We had a high faculty-to-attendee ratio, too. 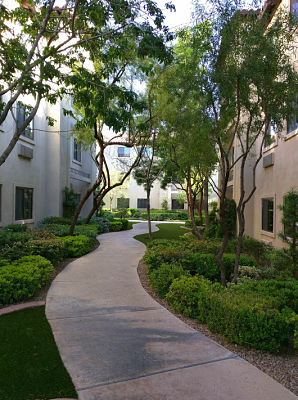 A walkway at the Tuscany hotel.

The entire conference took place at the Tuscany Hotel and Casino, which is located “1 block” (actual distance 1/2 mile) off the Vegas strip. This was a perfect location because it was away from the noise and crowds, but close enough that I could walk to the big casinos. The Tuscany itself is a fairly sprawling facility. My room, while spacious, was in the “N” building which could not be farther away from the conference rooms. Luckily, it was a nice walk (see right).

The best thing about the venue was that the entire conference took place there in the conference center. This included the meals, which were probably my favorite times. The food was nothing special, but the open seating in one big room fostered casual meetings and conversation. There were speakers at every meal, which I’d have found an annoyance except… they were so good. Kudos to the staff who selected them.

Attendees had the option of signing up for pitch sessions with agents and editors, which is typical. However, the organizers also offered something new: blue pencil sessions with faculty like myself. I volunteered, though I didn’t imagine anyone would be interested in some time with me.

To my great surprise, several fine authors booked a slot on my schedule. Usually, they were SF/F writers. Sometimes we looked at a query and first page. Sometimes it was a Q&A about their project and how to pitch it. I figured I was there to do whatever the author wanted.

Amusingly, a few of my authors were getting ready for a pitch session with an agent or editor. In these cases, I got to be the warm-up. I’d say things like, “Oh you’re meeting with Lisa? I hung out with her yesterday and she’s super nice.” or “Okay, do not tell that agent you’ve written seven books already. You’ve written one book with series potential.”

It helped that all of the agents and editors taking pitches were incredibly friendly and approachable. But I think any conferences that do pitch sessions should consider doing something like this.

Over lunch we did first page reads, which were both entertaining and informative. I’d heard about these things, but hadn’t seen one in person. Writers submitted the first page of their WIP. Two volunteers took turns reading them from the podium. A panel of 4-5 agents and editors read along as they listened. They were supposed to pretend it was a submission and they were very, very busy. When they’d normally stop reading, they raised their hands.

Once three hands were in the air, time was called and the reader stopped. Then, each member of the panel briefly offered their reaction. It was incredibly informative. Here are some things that threw them out of the story:

Cliched openings were another issue: stories that started with people we don’t know being chased, or someone in a house after their loved one ran off (or died). Often, the agents/editors didn’t get a sense of who the character was and why to invest in him or her.

Unfortunately, it was rare that the reader reached the end of the page. So rare that we gave a round of applause when they did.

The wonderful thing of a small convention like LVWC is that I had time to meet and spend time with so many great people. Here are two of the first people I met. 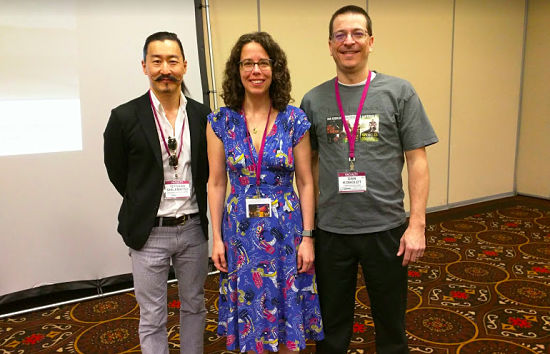 On the left, rocking the handlebar mustache, is Tetsuro Shigematsu. We met on the first day, and at the time I didn’t realize that he’s kind of a big deal in Canada. I heard an excerpt from his one man show Empire of the Son, and it was amazing. We spent a lot of time hanging out at the conference.

In the middle is Jane Friedman, who was the conference’s keynote speaker. She’s been in the publishing industry a long time; I’ve read her blog for years. Very smart lady, and everything she said was spot-on. I tried not to fangirl too much, but I did ask her to sign a copy of her latest book, The Business of Being a Writer. This is essentially a textbook covering the business essentials for a modern writer. If you’re reading this, you probably are one, so you should check it out.

Also while at the conference, I enjoyed hanging out with this guy: 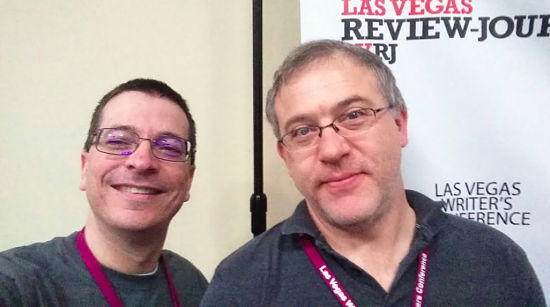 How excited does Paul look to be hanging out with his client? Answer: super excited. In seriousness, we got to spend some social time together, do our panel, and catch up. Good times.

Bottom line, the Las Vegas Writer’s Conference was an outstanding event. I enjoyed meeting many members of the Henderson Writers Group. They made me and the other writerly folks feel incredibly welcome. And that, my friends, is what happened in Vegas.