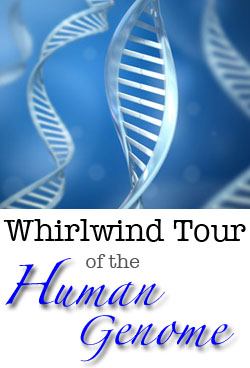 This article is the first in a new weekly blog series about the Science in Sci-fi. Each post will tackle one of the scientific or technological concepts pervasive in sci-fi (space travel, genetic engineering, artificial intelligence, etc.) with input from an expert. Please join the mailing list to be notified every time new content is posted.

It’s my turn to play expert again! I’ve worked as a genetics researcher about thirteen years, and co-authored more than 70 publications in Nature, Science, JAMA, the New England Journal of Medicine, and other journals.

I’m a principal investigator at Nationwide Children’s Hospital, and assistant professor at The Ohio State University in Columbus, Ohio. MassGenomics, my work-related blog, is where I do most of my writing about DNA sequencing, genomics, and inherited disease.

A Whirlwind Tour of the Human Genome

The human genome is present in virtually every cell of our bodies, and contains the complete set of instructions to build a human being. The first effort to read that instruction book – the Human Genome Project – wrapped up in 2001. Even then, it was clear that our genome was a large, complex, and puzzling thing. Fourteen years later, we’re still working to unravel all of its mysteries. Here’s a whirlwind tour of what we know so far.

Most of us picture chromosomes as the X-shaped things we learned about when studying mitosis in high school biology. That’s how they look under a light microscope during metaphase, when two sister chromatids (the original and its shiny new copy) are joined together at the centromere, a region of highly repetitive DNA sequence where proteins bind to pull sister chromatids apart.

Because the DNA replication machinery can’t copy all the way to the end of the molecule, chromosomes also have special structures at each end called telomeres. These are stretches of a six-letter sequence (TTAGGG, in humans) repeated over and over again. They’re essentially disposable bases, and they have to be, because a DNA strand gets progressively shorter every time a cell divides. The telomere-shortening process is so uniform that, by counting their size, it’s possible to estimate the number of times a cell has divided, and from that, the approximate age of the person.

There are about 20,000 known genes in our genome that encode proteins (i.e. make messenger RNA that’s translated into protein). The fraction of bases that eventually encode protein sequence is exceedingly small: about 1.5%. The rest of the genome, the non-coding genome, nevertheless contains many other types of elements that can regulate things happening in a cell. Many of the elements you’ve probably heard about — promoters, untranslated regions (UTRs), splice sites, exons, and introns – are structures that help govern transcription (making messenger RNA) and translation (making proteins). We’ve discovered, however, that there are many other kinds of noncoding elements that help regulate when and how proteins are made:

If you counted the bases in all of the genes and other functional elements I’ve described so far, you’d come well short of 3.2 billion. Even if we understood all of the elements above perfectly well (which we don’t), it begs the question, what the heck does the rest of the genome do?

Honestly, we don’t know. I think that a lot of it will probably turn out to have no function whatsoever. Other parts might have a function that we simply don’t know about.

The Genome and Genetic Diseases

Get ready, because I’m about to make this relevant to speculative fiction.

When people they hear the phrase “genetic disease,” the examples that often come to mind are severe inherited disorders, like sickle-cell disease, cystic fibrosis, and Huntington’s disease. Most of these are caused by very rare mutations in the coding region of a gene. This makes sense, because a mutation that disrupts or alters protein sequence is understandably capable of having a severe, immediate effect. Yet the vast majority of human traits that are “heritable” (i.e. have a genetic factor) are not so simply explained.

Many researchers, myself included, think that the genetic variation behind these is outside of the known coding regions. Think about it: a subtle change to a regulatory element could easily have an effect on a human being. For this mental exercise, let’s use the low density lipoprotein receptor (LDLR) gene. It makes a protein that transports LDL (the carrier of most cholesterol) out of the blood. Severe mutations in the coding region of LDLR cause a autosomal dominant hypercholesterolemia, a severe lipid disease. Instead, picture a subtle change in a regulatory element that influences the LDLR gene activity. It might not cause a severe, obvious effect. Over the 70+ years of the average human lifespan, however, even a very minor one change have long-term ramifications.

Now, picture the same scenario, but change “transports LDL” to “prevents magic use” or “protects against becoming a zombie.” There’s your SF/F story.

This article was first published in issue 8 of Fantasy Scroll Magazine.