E.B. Wheeler has an MA in European history and an MLA in historical landscape architecture. Her work writing about history and historic preservation includes the scripts for Letterpress Software’s award-winning Exploring America series. She also writes historical fiction and fantasy. Her first novel, The Haunting of Springett Hall, comes out July 2015. You should check out her blog.

When people think of witches, they often picture something like the scene from Monty Python and the Holy Grail, with peasants crowding around a woman with a long, warty nose, shouting, “She’s a witch! Burn her!” They also might imagine Hallowe’en witches with their pointed black hats and green skin, or modern Wiccans worshipping a mother goddess in covens. None of these images is true to historical European witchcraft (though witches were sometimes depicted flying on broomsticks). Witchcraft is so buried in stereotypes that its historical facts take a little digging to uncover.

The idea of magic—the ability of certain men and women to control the natural world through supernatural powers—is probably as old as humanity. Witchcraft in Europe, however, belongs mostly to the 1500s and 1600s, a time when the Black Death had shaken traditional beliefs and institutions and Europe was torn apart by religious and political upheavals.

Witchcraft in the Renaissance

Prior to the Renaissance, many Europeans believed that some people had the ability to talk to spirits, locate lost or stolen objects, create love charms, see the future, control the weather, interfere with livestock, and harm others through supernatural means. This type of magic involved a blending of earlier pagan beliefs with Christian ones and was frowned on by authorities but rarely prosecuted (often seen as merely superstitious). These activities continued into the Renaissance—the age of witchcraft—when practicing magic came to be seen by many as a form of devil worship.

Earlier magic often invoked either benevolent or malevolent spirits, but the Renaissance idea of witchcraft stemmed from the growing fear that magic practitioners made pacts with the devil to gain supernatural powers. The people who practiced folk magic may not have considered themselves in league with Satan, but church and political leaders now did. Even those authorities who did not believe witches had any real power (and they were often in the minority) viewed attempts to practice magic as a serious crime worthy of death.

Signs of the Devil

This focus on the devil changed notions of what was involved in magic, sometimes becoming quite colorful. Having sex with the devil or with demons was considered a common rite of passage in witchcraft. Witches were thought to harm people and livestock by touching or looking at them, by concocting magical brews, or by sending evil spirits to harass them.

One of the signs of a witch was a mark like a mole, but without sensation—an “extra nipple” which witches were supposed to use to give sustenance to their familiars. There were also things witches were said not to be able to do, such as recite the Lord’s Prayer.

Witch trials sometimes showed a sharp disconnect between the views of common people and the beliefs of political and religious authorities. Many people executed for witchcraft insisted that they were innocent or only confessed after being “cleansed” by torture (the Inquisition was often involved in Continental witchcraft trials).

A minority of people accused of witchcraft confessed freely to making pacts with the devil in hopes of gaining power. Another group of the accused were those practicing older forms of folk magic, who did not view their activities in the same malevolent light as their accusers. In Italy and other parts of southern Europe, some confessed witches claimed that their consciousness left their bodies while sleeping to battle with other witches and protect the harvests. Their accusers struggled to make these confessions fit into their view of witchcraft.

Concern about witches wasn’t reserved for political or religious leaders; the common people also feared those who might further disrupt the order and safety of their communities. Outsiders were often the targets of witch hunts—those who were on the margins of society, especially single or widowed women, the mentally ill, thieves, and the poor. Women were suspected of witchcraft more often than men, but men were also accused and executed.

The old stereotype that midwives were often viewed as witches is probably false. Midwives filled an important role in society—sometimes even having the power to baptize children if they looked likely to die at birth—and though the growing, male-dominated medical profession began to chip away at their authority, they were still important enough in their communities that they were not often persecuted.

If you’re writing historical fiction, it’s best to research the exact time period and location you’re writing about to see which trials and punishments were used, because they varied greatly across time and place. Some witches were executed by burning at the stake, but many more were hung, especially in Britain and its colonies. Another form of execution in Britain and America was being pressed, with the victims lying under a board and having stones placed on them until they were crushed to death.

People accused of witchcraft sometimes chose this slow, agonizing execution by refusing to enter a plea of guilty or not guilty. Being pressed was a punishment for silence in the face of the judges, but because people could not be tried or convicted without entering a plea, the victims saved their family’s property from a government anxious to seize it from convicted criminals. 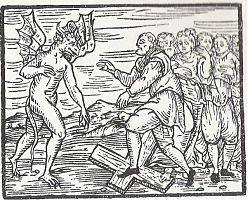 The Salem witch trials provide an interesting case study in witchcraft. A group of girls in Massachusetts, perhaps influenced by slave folk beliefs, claimed to be persecuted by witches whom they saw in visions. They accused nearly 200 people, and twenty were executed for witchcraft before the trials were halted. Nineteen of the victims died by hanging and one by pressing. Another four died in prison, plus a baby born to an accused mother (prisons during this time were atrocious breeding grounds for disease). Thirteen of those killed were women, so slightly more than half.

Those accused ranged in age from their 20s to their 80s, though the majority were on the older end of the spectrum. Some fit the typical descriptions of witches—socially marginalized and/or involved in illegal activities (or possibly mentally unbalanced)—but many had lived respectable lives and had families and community members who vouched for them (to no avail).

Several of the victims were couples where one spouse had tried to defend the other from the witchcraft accusations. One, George Burroughs, was a Harvard-educated minister, who recited the Lord’s Prayers just before his execution, causing a stir among the crowd. A few women escaped hanging by “pleading their belly”—pregnant women were not executed because of the desire to spare the unborn child from being punished for the crimes of its parent.

Witchcraft trials give us insight into a mindset that is mostly lost to the modern word. They came about in part because of an active belief that God and Satan, saints and demons, were not abstract concepts or distant religious figures, but actively involved in everyday life. Especially during times of political and religious upheaval, people felt themselves involved in a war between forces of good and evil—not just in a metaphorical sense, but as a literal, day-to-day, physical reality.

The lines between the spiritual and physical world were blurred at best. Spectral evidence, such as the dreams and visions of alleged victims, were as important to detecting witchcraft as witnesses and confessions. Understanding this can help us come a little closer to understanding the “foreign country” of the past and creating settings and characters that will transport readers to this lost world.

Further reading:
Religion and the Decline of Magic by Keith Thomas
Magic in the Middle Ages by Richard Kieckhefer
The Devil in Massachusetts by Marion L. Starkey
The Night Battles by Carlo Ginzburg

If you liked this article, please share it with your writing friends using the buttons below. You can also click to send one of these ready-made tweets: Please share this article: