This article on food and drink for writers is part of the Science in Sci-fi, Fact in Fantasy blog series. Each week, we tackle one of the scientific/technological concepts pervasive in sci-fi or a historical/cultural element of fantasy with input from an expert. Please join the mailing list to be notified every time new content is posted.

Crystal King is an author, culinary enthusiast, and marketing expert who resides in Boston, Massachusetts. She received her MA in critical and creative thinking from UMass Boston. She has taught classes in writing, creativity, and social media at several universities including Harvard Extension School and Boston University, as well as at GrubStreet, one of the leading creative writing centers in the US. She is also the author of food-laden novels The Chef’s Secret and Feast of Sorrow. You should follow her on Twitter.

We all have to eat, and there’s a good chance that the characters you are writing about need to eat too. It’s such a fundamental part of who we are that it’s easy to overlook the power that food can bring to your story. Your characters sitting down to a meal is one thing, but there are many other ways that the world of food can influence your characters and your plot.

Let’s walk through how our own world is impacted by food. Consider this “food for thought” as you imagine the worlds you are building. How can these same things affect your characters and plots?

Food and Drink in Religion

Food is a central element to nearly every religion on this earth. Thousands of years ago people sacrificed food to the gods, whether it was food made on the hearth, or by animal sacrifice. Wine has been used as a libation for centuries. People also buried food with the dead, so that the person could be fed in the afterlife. The ancient Romans even left their scraps on the floor so that the ghosts of the family ancestors, or the household gods, would be nourished. Mosaics, frescoes and paintings across the ages depict the gods having feasts and we humans have always imagined what those feasts might be like. The ancient Greeks believed that the gods had a magical fruit, ambrosia, that gave them their power and strength. 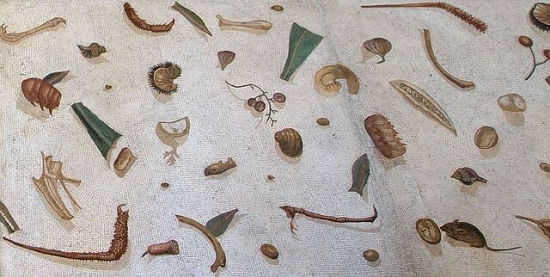 Mosaic of an unswept floor from Ancient Rome by Heraclitis (Wikipedia)

Religions around the world have developed their own sacred rituals and rules involving food, requiring or restricting food at certain times (no meat on Fridays if you are Catholic), by developing specific food taboos (no pork in the Jewish and Muslim cultures), or by specifying the specific ways that you can eat some foods (e.g. the food must be blessed before eating).

Food becomes symbolic in a number of rituals as well. Consider transubstantiation in the Christian faith, the idea that the body and blood of Christ is transformed at consecration, with the physical bread and wine left as representation. That is what practitioners are taking in when they have communion—they are, essentially, consuming Christ and taking him into them directly.

Religious food also turns into tradition in societies, for example: honey cake at Passover; hot cross buns at Easter; baklava having 33 layers to correspond with the years Christ was alive; ghee as the sacred food of the Devas; dates to break the fast at Ramadan; dumplings eaten at midnight to welcome in the Chinese New Year.

Food and Drink in Politics

Wikipedia defines food politics as “the political aspects of the production, control, regulation, inspection, distribution and consumption of food.” That’s a mouthful, definitely, and it carries with it a deeply complex number of issues regarding how food entwines throughout our political systems.

You might be familiar with the term, “bread and circuses.” Roman emperors and politicians rose to power by appealing to the poorest citizens, introducing a grain ration for its citizens. This ration, plus giving the people the gladiatorial games, helped those politicians receive the valuable votes needed for laws in the Senate.

As we progress through history we see farmers paying taxes with chickens and pigs, serfs toiling on the land to earn their keep. Trade routes helped many countries grow rich from their valuable imports. Being able to obtain costly foodstuffs has been a priority of the nobility from the very earliest times. And of course, once those trade routes are established, eventually the food may become a commodity. 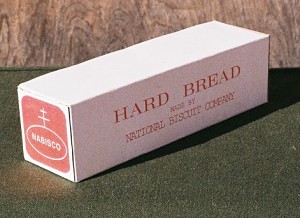 Our food politics today are complicated. Many countries have programs that help the homeless and the poor to be fed, and many also run services to make sure housebound elderly are fed as well. Most countries have strict regulations that govern the sale of alcohol, especially across state lines, and into other countries. During wars countries often ration food, and soldiers receive specific rations designed for convenience and travel. In the U.S., we have the FDA that regulates food safety and our government provides subsidies to our farmers to keep them economically viable. And, this is just the tip of the iceberg.

Consider how food affects the governments and systems you are creating in your novels. You don’t have to dive as deep as Suzanne Collins did in her Hunger Games novels, but giving your reader a sense of how the characters are affected by governmental systems can bring tension and, perhaps, empathy or affinity, to your readers. Can all of your characters afford the same types of food? What do the nobility eat? How do the poor get their food? What types of trade routes are in place? How does the government regulate and control food? Does this regulation come from a desire to manipulate the people, or is it from a place of help and safety?

How many times have you met up with a friend for coffee, for cocktail, or for dinner? Nine times out of ten our social connections with others involve food. We have business lunches, we have drinks with our girlfriends, we have summer picnics with our kids, and we celebrate special occasions with our family with cake or potluck dinners.

There are also patterns and propriety that go along with these social food meetings. If a man asks his single female coworker out for a drink, that probably carries a different meaning to it than if he suggests a group of fellow employees to meet at the corner bar after work. A gathering that has an invitation to it carries a different gravity than a meeting that is organized via text message. The type of food or style of restaurant might dictate certain behaviors such as what one might wear. These are subtle things but understood within a culture.

Additionally, how the wealthy dine is very different than how the poor in a society dines. Everything hinges on what one can afford, ranging from the silverware and plates to the type of food that sits upon them, and even in the manner in which one eats the food. 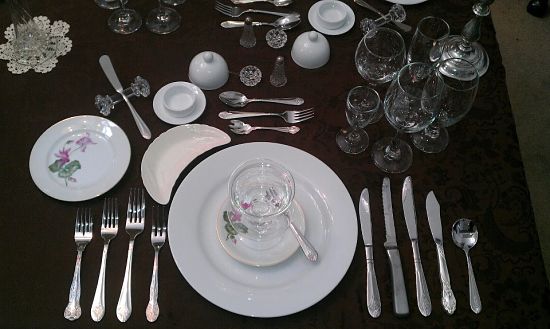 Using food and drink, you can build tension between your characters, devise simple ways to show the reader more about them and the world in which they live. How does food factor into the way that characters relate to each other? What memories of family and friends does food trigger for them? Are there specific relationship rituals such as dating, marriage or death that involve food?

Food and drink play a central role in so much of our lives, and it should in your characters’ lives too. Food is love, politics, religion, history, memory, consolation and conviviality. Food identifies us and who we are. We cannot exist without it, and our lives revolve around it, even when we don’t think it does. Finding deeper ways to weave in the impact of food upon the stories you are telling will make them more realistic, credible and, importantly, relatable.