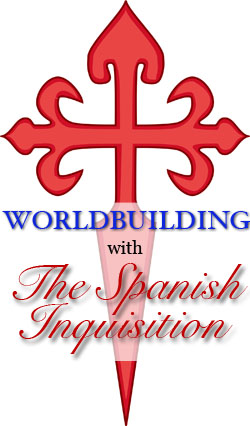 This article on worldbuilding with the Spanish Inquisition is part of the Science in Sci-fi, Fact in Fantasy blog series. Each week, we tackle one of the scientific or technological concepts pervasive in sci-fi (space travel, genetic engineering, artificial intelligence, etc.) with input from an expert.

Nobody Expects the Spanish Inquisition

Monty Python and Mel Brooks’s modern portrayals of red-robed men with funny accents exploits the brutality and hatred derived from The Spanish Inquisition for laughs. All joking aside, this powerful Medieval and Renaissance Institution borne of anti-semitism and overzealous religious fervor should never be forgotten, or ignored. A little knowledge about The Spanish Inquisition offers an invaluable resource for any fantasy, alt-history, or sci-fi author in world-building. Want a disturbing way to literally torture your characters and/or build an oppressive regime? Look no further.

The royal appointment of the first inquisitor‑general was Thomas de Torquemada, who had been one of the seven inquisitors commissioned by papal letter in 1482. He was made Inquisitor of Aragon, Catalonia and Valencia by Pope Sixtus IV on October 17, 1483. The appointment of Torquemada was a crucially important event in the development of the Spanish Inquisition.

“Rigid and unbending, he would listen to no compromise of what he deemed to be his duty, and in his sphere he personified the union of the spiritual and temporal swords which was the ideal of all true churchmen. Under his guidance, the Inquisition rapidly took shape and extended its organization throughout Spain and was untiring and remorseless in the pursuit and punishment of the apostates” (Lea, Henry Charles, A History of the Spanish Inquisition, Vol. I p.174)

As the Spanish Inquisition gradually gained independence from the Crown, it started its rise in power and influence that would make it an institution having supremacy to all other governmental bodies and virtual equality with the Spanish crown. 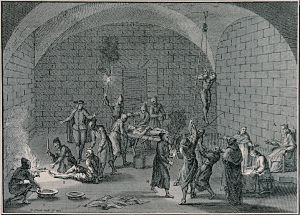 The means of which the Spanish Inquisition dealt with heretics were many and quite varied. Under the Inquisitorial Process “the accused was assumed to be guilty and that the object of the tribunal was to induce or coerce him to confess his guilt; that, for this purpose, he was substantially deprived of facilities for defence and that the result, for the most part, depended on his powers of endurance which the judges, at discretion, could test to the utmost” (Lea, History, Vol. II p.465).

Basically, the accused was virtually helpless. The individual would be taken to a secret prison, confined to a cell excluded from all outside contacts for days, weeks, or even months, left wondering about his fate. Despite the cruelties inflicted by the Inquisition they were not only attempting to punish the body. The holy mission of saving souls, though the means were quite questionable, was of the utmost importance. An Inquisitional Procedure was to be based on the ideal of the inquisitors being able to judge all cases based on truth, justice, and impartiality.

“The evidence of witnesses is scrutinized in the light of their character and quality and those who are found to bear false‑ witness are most severely punished. The accused, while detained in the prisons, are treated kindly and liberally, according to their condition; the poor and the sick are abundantly furnished with food and medicines, … and are favored in every way…and…as Time is the revealer of truth, cases are not hurriedly finished but are prudently prolonged, as is requisite when there is such peril of the life, fame and property, not only of the accused but of his kindred” (Vol.II p.483).

The inquisitorial ideal remained only that, an ideal that was never truly attained. The holy mission of saving souls was attempted by inhumanely harsh methods including the extracting of confessions by torture and various punishments for recompense.

The crime of heresy was exceptionally hard to prove and the Inquisition’s most effective means of ascertaining the truth was through confessions brought about by torture. “The conditions held to justify torture were that the offense charged was of sufficient gravity and that the evidence, while not wholly decisive, was such that the accused should have the opportunity of purging it, by endurance proportionate to its strength. From the inquisitor’s point of view, it was a favor to the accused, as it gave him a chance which was denied to those whose condemnation was resolved upon.” (Lea, History, Vol. III p.7).

Certain limitations were supposed to be placed on torture. No torture was intentionally allowed to put life or limb in peril. Technically, torture was allowed only to be applied once. However, it was often stopped, suspended for a time and resumed later.

Without going into their gory details, the varieties of torture employed by the Inquisition can often be judged solely on name: Water torture, the Pear, the Heretics’ Fork, the Rack, the Saw and the Pendulum were all methods employed, ranging greatly in severity. The severity of the tortures could be easily seen in the reports kept by the Inquisition.

“The secretary faithfully recorded all that passed, even to the shrieks of the victim, his despairing ejaculation and his piteous appeals for mercy or to be put to death nor would it be easy to conceive anything more fitted to excite the deepest compassion than their cold‑blooded, matter‑of‑fact reports” (Vol. III p.18).

The punishment system the Inquisition utilized was as harsh as the torture system used in gaining confessions. There were several minor penalties implemented by the Inquisition. Reprimands, sometimes verbal, other times as severe as lashings, were used often. Those of minor offenses were also exiled at times. The more peculiar of such lesser punishments included the razing of the house of a heretic, and such spiritual penance as requiring fasting and pilgrimages.

The harsher penalties used usually resulted in severe wounds or death. Scourging was when a public lashing took place while the victim’s charges were read aloud. Some of the unfortunates who were convicted by the Inquisition were sentenced to man the oars of the Spanish fleet’s galleys. Others were imprisoned permanently.

The harshest of all punishments were the burning at the stake and the auto de fe. Those that were burned at the stake were the heretics who were turned out by the Church and handed over to the secular authorities who took over the criminal’s punishment. 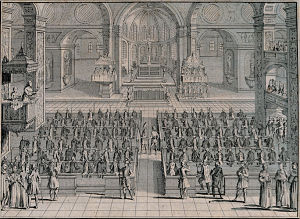 An auto-da-fé of the Spanish Inquisition held in a church. Credit: Wellcome Library, London.

The auto de fe became the Spanish Inquisition’s largest show of authority and it generally went to all expenses to insure impressiveness and vast amounts of public attendance. Most, but not all auto de fe ceremonies were held as public exhibitions. Some private ceremonies were held in churches away from the public. During the auto de fe the sentences of those heretics to be punished were read to the public after a procession of those condemned, the inquisitors and all officials involved into the public square. A sermon was preached by the inquisitors and a general celebration would commence. The burning of the condemned would take place at the end of the day after all of the minor penalties had been administered.

The Spanish Inquisition gradually came to an end due to European political factors, internal corruption, and general public hatred. It was officially abolished on July 15, 1834. Yes, it officially lasted that long.

Legacy of the Spanish Inquisition

The Inquisition’s fanaticism grew in Spain out of the enmity between Christians and Jews. However, over the years of its operation it gradually became a completely independent body functioning, not to oppress the Jews, but, to finish the holy quest of saving the world from heretics of all sorts. It was efficiently organized and became quite effective in accomplishing its purpose.

The memories of the horrid accomplishments of the Spanish Inquisition are often selectively forgotten. Such atrocities should never be justified or allowed to continue by society, whether committed in the name of religious fanaticism, politics, or individual prejudices. Alas, we all need to learn from the past so as not to repeat it. Substituting fantasy, or alien races, and/or practitioners of magic, or other forbidden arts as the driving forces behind an Inquisition in our fiction offers an untapped wealth of conflict for any author and opens wide meaningful opportunities to memorialize and learn from man’s extensive inhumanity against man.