I’m back after having proven my physical existence to fellow SF/F enthusiasts at World Fantasy Con in Columbus, OH. This was my first national convention, and made for an interesting experience. I took a few decent photos that I thought I’d share along with some convention highlights before I give my fair warning about NaNoWriMo.

The first thing that greeted me after registration was a large canvas bag with half a metric ton of free books: 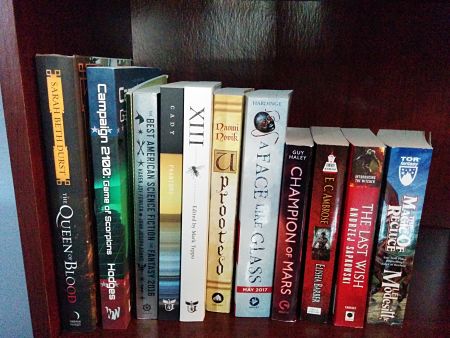 I was especially tickled to get a trade paperback of Uprooted, the Nebula award-winning novel that I’m currently reading on my Kindle. Another pleasant surprise was Campaign 2100: Game of Scorpions, a timely new book by Larry Hodges published by one of my favorite small presses, World Weaver Press.

Friday night, I participated in a mass autographing session in the hotel ballroom. This was a three-hour, open event in which authors plunked down at any table they chose and signed books for people. I did hang out my shingle for a little while, just to get a taste of the experience. 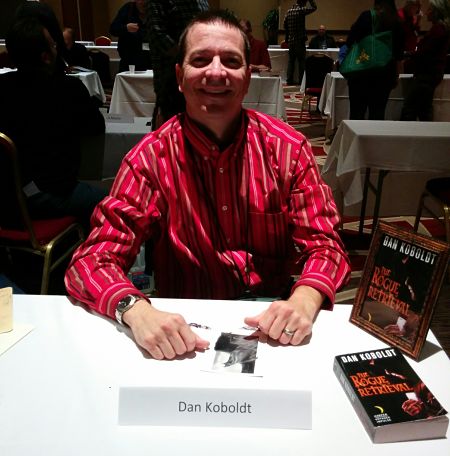 Realistically, since there was no one selling my book at the con and I don’t have hordes of fans clamoring for my autograph, I spent a lot of that time meeting other authors and getting them to sign their books for me. It was a wonderful opportunity to meet Lee Modesitt, Mercedes Lackey, David Drake, Robert J. Sawyer, Larry Niven, and other scions of SF/F. They helped me and Tex Thompson out with a super-secret goodwill project to be recounted later. Everyone was patient, polite, and humble despite the long lines.

I listened to several excellent panels, and had the chance to sit in on a few myself. One was a panel on “Aviary of the Skies” with my buddy Auston Habershaw, who already beat me to the punch in sharing his WFC 2016 impressions. Somehow I also shoehorned my way onto a wonderful panel about how George RR Martin has changed fantasy. We had a great set of panelists that included Ginjer Buchanan, a longtime editor for Ace/Roc (now retired) who’s known GRRM personally for many years. Everyone had plenty to say, and the hour flew by. I’d do that panel again in a heartbeat!

Between panels, I enjoyed meeting some fellow Harper Voyager authors — Laura Bickle, Kelley Grant, and Sarah Beth Durst — as well as several online friends from the Codex forums (I offered the secret handshake and everything). My agent Paul Stevens took me out to dinner on Saturday to the Flatiron restaurant, which is modeled after the NYC building and thus made him feel right at home.

The high point of the convention was the banquet, where I was lucky enough to sit at a table reserved by Jen Brehl, my publisher’s editorial director. One of her authors, Paul Tremblay, was nominated for the WFC award for best novel. 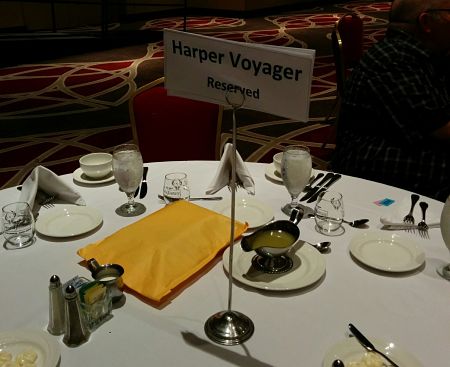 Yes, I felt fancy and important

The table had a prime location near the stage, so I had a front-row seat for the awards portion of the banquet. Presenters Gordon Van Gelder and Jo Fletcher proved capable and dignified hosts for the affair.

If I’m honest, my favorite part of the banquet was between the meal and the awards, when I got to mingle among some of the SF/F elite. I enjoyed meeting editors like Scott H. Andrews (of BCS Magazine) and Ellen Datlow (Tor.com), and authors such as Max Gladstone, Kay Kenyon, and Guy Gavriel Kay. I might have even snuck into a photograph with the latter!

All told, it was a nice little event and the saddest part was when it ended.

Now: NaNoWriMo Is Nigh

November seems to have snuck up on us, so I’m obligated to put you readers on notice. Every November, thousands of writers participate in this crazy attempt to write 50,000 words in a month’s time. It’ll be my eighth year participating in National Novel Writing Month, or NaNoWriMo, and that means I don’t plan to be on the blog, Twitter, or Facebook for the next 30 days.

Side note: there is no better way to get started at writing long fiction, and I’d love for you to join us. Which is free to do. Either way, you can track my progress or add me as a buddy on my NaNoWriMo page.

Take care of yourself, and see you in December!