I’m taking part in #WriterInMotion this month — writing and revising a 1,000-word story while documenting the process on this blog. Last week I shared the first draft of my sci-fi story (“The Watcher in the Vale”). It clocked it at about 1,050 words, so one of my goals in the first revision was to get below 1,000 words. Other things steps I took during this revision:

Without further ado, here’s the visual story prompt and my 990-word story that it inspired. 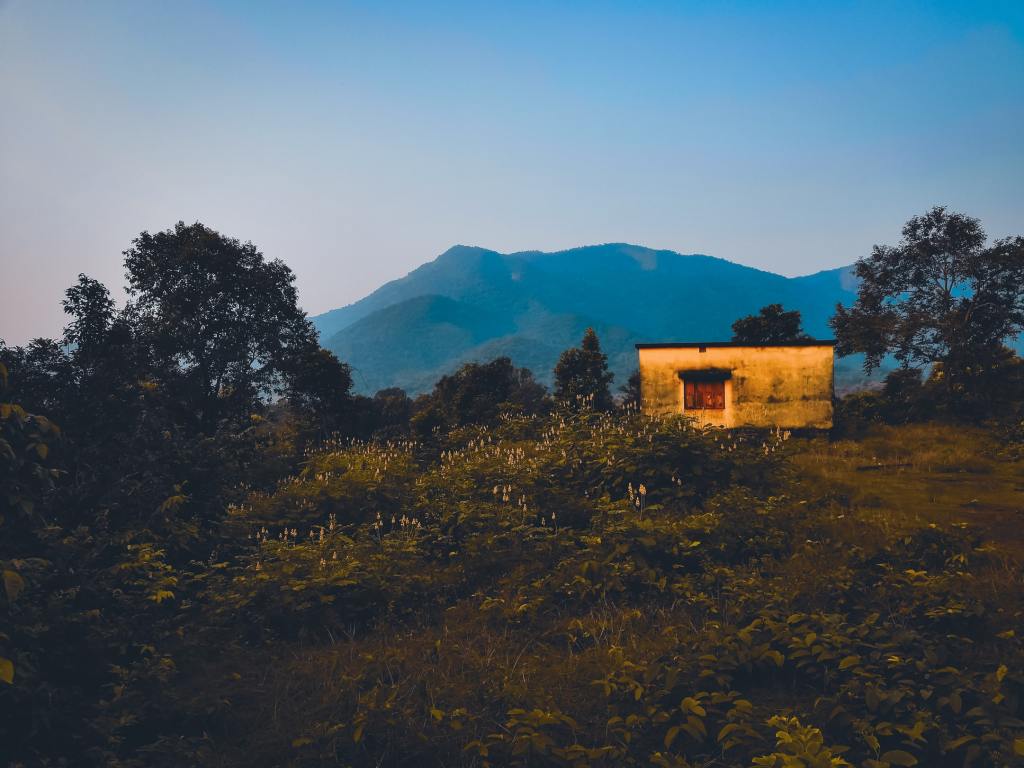 Photo by Rahul Pandit on Unsplash

“The Watcher in the Vale”

The knock on my door caught me by surprise. Three confident, staccato beats. There’s not a settlement for miles in any direction, and this little stone keep isn’t listed on any map. I make no effort to scrub the weather stains from the old stone walls. The unidentifiable shrubs and saplings threaten to swallow the entire structure every year. In short, my humble abode is hard to find as any place in the galaxy.

But still they come.

I yanked open the door after the second knock. A young woman in a Space Corps uniform stood there. She might be in her early thirties or a bit older; I was losing my ability to tell. Three stripes, so a lieutenant. She had red hair, green eyes, and the unmistakable set of her shoulders of someone who’s made up their mind. The familiar smells of ozone and sanitizing foam still lingered around her. Fresh off the shuttle, then. She hadn’t wasted any time.

My abruptness brought her up short. She blinked, then cleared her throat. “My name is Karina Fawcett.”

“Pleased to meet you.” I made it clear with my tone that I wasn’t.

“I understand there’s a device here that allows one to see the future.”

“Who told you that?”

She hesitated and looked away. “Just some people I know.”

“Fine. Now, go away.” I slammed the door and barred it.

She didn’t knock again. I hoped that would be the end of it.

When I went out to collect firewood, Fawcett was still there. She sat in the shade of one of the misshapen trees. So still that I didn’t see her until I was halfway down the path. I ignored her, but felt her eyes on me as I dragged a large bough back up to the keep and got to work with my axe.

I fell into a rhythm of setting, chopping, and stacking. Working with wood relaxed me. It was good, simple labor. Kept my mind off things. Probably a little too much; I didn’t realize she’d moved until her shadow fell across my chopping block.

I bent down to scoop up the pile of chopped logs. “No, Lieutenant Fawcett. You really don’t.” I turned my back on her and went back inside.

She didn’t bother me again until the next morning. I stomped out to haul water from the well. She was waiting by my door when I got back. Judging by the state of her uniform, she’d spent the night on the ground. The bags under her eyes told how well that had gone.

“Why do you keep saying that?” she snapped.

“In hopes that you might listen.” I held up a hand to forestall the inevitable protest. “I know, I know. You have an important question and you’re convinced that this is the only way to answer it.”

That gave her pause. The look of astonishment said I’d hit pretty close to the mark. The interstellar war had raged for six years. Last I’d heard, it was going poorly. Wasn’t hard to guess what a young officer from the Space Corps wanted to know.

They all came this way. Desperate to know what the future held. I shook my head. “You might see something you don’t like.” That happened more often than people guessed. Even worse were the ones who took their glimpse and didn’t see anything. Given the precise focus of the instrument and the way the timing worked… well, it didn’t take a prophet to know what that meant.

“Whatever you see, you probably can’t change.”

A moment of silence stretched between us. A breeze ruffled the otherwise still mountain air, shifting a few strands of auburn hair across her face. It reminded me just how young she was. So few years under her belt, so much weight on her shoulders.

She stood up straighter, stuck out her jaw, and I knew the words coming before they left her mouth. “I’ve come to look, and I won’t leave until I have.”

I sighed to myself and gave a tight nod. “Come on, then.”

As I crossed the threshold, I brushed a finger across a tiny sensor panel on the door frame. A soft chime sounded. Lieutenant Fawcett harrumphed. The biometric security always surprised people, especially the military types. I hefted the bucket onto my stout wooden table.

I nearly offered her a drink, but she only had eyes for the instrument. It was a shimmering glass oval two meters tall mounted into the stone at the back of the keep. The Lens, it was called. So named because it showed you a moment two months, two days, and two hours into the future.

“It’ll only work once for any person. Do you understand?” I asked.

“You know the words?”

She nodded this time, biting her lip. She looked up at the glass. “Mirror, mirror.”

I didn’t look. I never do. Still, I couldn’t close my ears to the noise. The roar of space engines, the dull thuds of explosions. The screams.

When the vision faded, it wasn’t hard to read the devastation on her face.

She moved to the door, which I hadn’t bothered to close. I followed her outside. It was midmorning by then; the sun had crested over the high ridge and chased the mist away. She set off at a slow but deliberate pace, heading away from the spaceport into the tall and mist-shrouded mountains. Never said another word.

I shook my head and would’ve gone back inside, but I spotted movement from the edge of the vale. A man this time. He wore a different uniform but marched with that familiar, grim purpose toward my door.