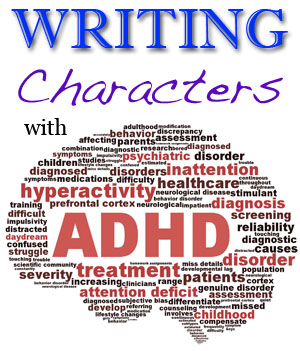 This article on ADHD for writers is part of the Science in Sci-fi, Fact in Fantasy blog series. Each week, we tackle one of the scientific or technological concepts pervasive in sci-fi (space travel, genetic engineering, artificial intelligence, etc.) with input from an expert. Please join the mailing list to be notified every time new content is posted.

Josh Michaels is the pseudonym of Dr. Joel Shulkin, a developmental-behavioral pediatrician and former USAF physician with over fifteen years’ experience diagnosing and treating children with developmental disorders including autism. As Josh Michaels, he writes medical thrillers and dabbles in SF/F thrillers and YA Fantasy. He is represented by literary agent Lynnette Novak of the Seymour Agency. You can find him on Twitter @drjoshmichaels and @authorjshulkin, FaceBook/Instagram @drjoshmichaels, and on his website http://authorjoshmichaels.com.

And the ADHD—you’re impulsive, can’t sit still in the classroom. That’s your battlefield reflexes. In a real fight, they’d keep you alive. As for the attention problems, that’s because you see too much, Percy, not too little. Your senses are better than a regular mortal’s.

-Annabeth, Percy Jackson and the Olympians by Rick Riordan

A common trope, at least in Middle Grade (MG) and Young Adult (YA) fiction, is that ADHD is a superpower. In Rick Riordan’s middle grade fantasy series, Percy Jackson and the Olympians, Percy has ADHD and dyslexia (a reading disorder). He has trouble staying focused in class and can’t read English, but he can decipher ancient Greek.

Evolution, Tyler. Your gift, you’re an asset, not a liability. You know that, too. Somewhere, deep down, you knew when they told you to take those drugs, to make you fit into their archaic, dying system, you knew. You didn’t take the drugs.

In T.L. Costa’s YA thriller, Playing Tyler, the titular character struggles in school and has a horrible home life, but he excels at playing video games. He can multi-task sufficiently to fly military drones. Tyler sees his teachers and others who want him medicated as villains trying to suppress his abilities. A similar theme is drawn in the Percy Jackson series:

Of course, the teachers want you medicated. Most of them are monsters. They don’t want you seeing them for what they are.

Annabeth, Percy Jackson and the Olympians

Riordan and Costa laudably portray characters with ADHD as successful. However, demonizing treatment is potentially harmful to people with ADHD, many of whom benefit from effective medication. This blog post reviews some of the complexities and considerations in writing about ADHD.

Attention Deficit Hyperactivity Disorder (ADHD) was first described to some degree in the 19th century and has been known by many names, including “Clumsy child syndrome,” “Hyperexcitability syndrome,” and “Minimal Brain Dysfunction”. ADHD wasn’t formally described in the Diagnostic and Statistical Manual of mental disorders until 1968, when it was called Hyperkinetic Impulse Disorder. In 1980, the name was changed to Attention Deficit Disorder (ADD), with subtypes classifying hyperactivity or no hyperactivity. The term ADHD was first used in 1987, followed in 2000 by classification of subtypes (primarily inattentive, primarily hyperactive/impulsive, and combined). Although the revised DSM eliminated the term ADD, the term is still widely used in common parlance.

The diagnostic criteria have changed over time, but commonly include:

As most people experience these symptoms at one time or another, a diagnosis requires a minimum number of symptoms over a period of at least six months, occurring in two or more settings, inconsistent with developmental level, and not better explained by another mental disorder like substance abuse or schizophrenia. While individuals with ADHD are often (but not always) creative, adventurous, and humorous, the last D stands for Disorder, which means the symptoms significantly affect their ability to function. Many people are daydreamers or risk-takers, but they don’t meet criteria for ADHD if they’re otherwise highly effective. 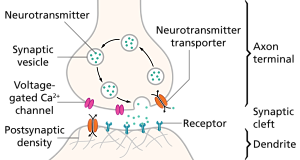 The presynaptic neuron (top) releases a neurotransmitter, which activates receptors on the postsynaptic cell (bottom). (Wikipedia)

Studies have shown that in ADHD these symptoms reflect deficiencies in neurotransmitters at key cerebral control centers, particularly the brain’s “conductor” known as the prefrontal cortex. Low norepinephrine (a fight-or-flight neurotransmitter) contributes to inattention, while low dopamine (a neurotransmitter that suppresses impulses and stimulates the pleasure center) contribute to hyperactivity/impulsivity.

Psychostimulants increase norepinephrine which can make someone more alert and focused. They increase dopamine to suppress impulses and attenuate the “background noise” of external stimuli. Such medications can be quite effective, but can also produce adverse effects, such as appetite suppression, headaches, tics, mood swings, and insomnia. Because dopamine also stimulates the pleasure center of the brain, these medications can be addictive if abused. Therefore, psychostimulants are classified as controlled substances and have special prescribing requirements.

Over the last decade or so, medications known as non-stimulants have become more popular. These are not classified as controlled substances because they are not considered addictive drugs. They come in two main classes, norepinephrine reuptake blockers and alpha-2 receptor agonists. Atomoxetine is the only norepinephrine reuptake blocker FDA-approved for treatment of ADHD. By making norepinephrine more available to the brain, it increases alertness and focused attention without affecting dopamine levels. The second class includes the alpha-2-agonists, guanfacine and clonidine, which effectively block the fight-or-flight response, helping to control impulsivity, hyperactivity, and reactivity. 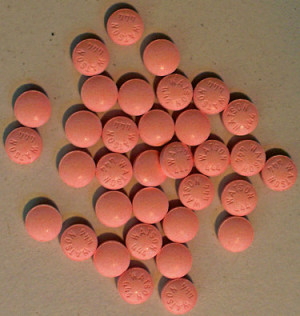 Understanding the different treatments and how they work helps in writing a realistic character. Short-acting stimulants are more likely to be abused since they have a more rapid onset, while long-acting forms don’t have the same addictive potential. For example, it doesn’t make sense to have a character selling guanfacine to get his friends high since that’s not how the drug works, unless it was an example of the character’s poor judgment and insight. However, someone taking long-acting stimulants for years and stopped suddenly is more likely suffer withdrawal than someone who only took low-dose, short-acting stimulants for a few weeks. People with Bipolar Disorder or Schizophrenia may stop taking their medications due to dulling effects on their mood and behavior, but people with well-managed ADHD generally feel the medication helps them, unless the dose is too high, or they experience other adverse effects.

More recent studies have shown that, while medications are helpful, the best outcomes result from a combination of medication and psychotherapy. cognitive-behavioral therapy, or other interventions which teach someone with ADHD how to manage their own executive functioning (organization, planning, self-regulation, etc.). Even with such therapies, approximately 80% of ADHD teens still require medication, but this may change with earlier interventions. While younger children often show more prominent hyperactive symptoms, it is often the inattentive symptoms that persist into adulthood. Teens with ADHD are far more likely to be involved in driving incidents, and more than a third have problems in school, which may result in dropping out.

Roughly half of individuals with ADHD have anxiety, and a third or more have a learning disability. Other mental health conditions, such as depression or eating disorders, are more common in those with ADHD, more often when the ADHD is not properly treated. Oppositional defiant disorders may be associated with ADHD, particular in the face of social pressure and inadequate treatment for the ADHD, and substance abuse is 3-4 times higher than average in those with untreated ADHD compared with their peers.

At the same time, many other conditions can present with symptoms similar to ADHD. Children with learning disabilities often seem unfocused in class, when they’re actually confused or frustrated. Sleep problems can cause inattention and mood dysregulation. Autistic children may miss social cues or seem unfocused because they’re over-focused on something else or are socially withdrawn. Anxious children may “shut down,” i.e., seem like they’re not paying attention, because they’re afraid to answer and become the center of attention, or because they’re worrying about something else. Someone with Bipolar Disorder may have extreme highs and/or extreme lows that may be mistaken as ADHD.

There is no such thing as adult-onset ADHD. Those adults who had unrecognized and untreated symptoms as children are probably really struggling by the time they are diagnosed (41 percent of adult cases are considered “severe”), if they are diagnosed. While an estimated 4.4 percent of the adult population has ADHD, less than 20 percent of these seek help for it.

Even though ADHD affects roughly 11% of American adults, ADHD is more commonly portrayed in children’s literature and YA books than in adult fiction. Instead, adult characters are described as “high-energy,” “bumbling,” “absent-minded,” or simply “easily distracted.” This can be problematic if mannerisms and behaviors are inconsistent throughout a story.

In TV and movies, a character with ADHD is often the ditzy, quirky (usually female) character whose impulsive goofs make you love them that much more, like Anna in Frozen or Julie in Julie and Julia. Or a character with ADHD serves as comic relief, like Barney on How I Met Your Mother. They “space out,” fumble their words, and make careless mistakes. On screen, it makes us laugh. But in real life, we’d probably be as annoyed as the other characters.

ADHD is neither a superpower nor a punchline. It is a serious condition that shouldn’t be taken lightly. ADHD isn’t just about being a daydreamer or impulsive, nor do medications fix everything. If someone with ADHD doesn’t learn to manage their symptoms, either on their own or with help, they often struggle academically, in relationships, and in everyday activities.

Inaccurately describing a character with ADHD can perpetuate derogatory stereotypes. Understanding ADHD can help a writer decide how a character’s expected behavior will affect the way they handle story events, as well as how other characters perceive them. And, as many readers have ADHD, it is critical for writers to be sensitive to their audience.

While many characters in popular culture are “suspected” to have ADHD, it’s not presented as a common diagnosis in adult literature. For writers who are willing to do their research, consult with experts/sensitivity readers, and/or who have personal experience, a character with ADHD can be complex and intriguing, as can the writing of their story. I look forward to seeing how your characters cope with ADHD and how they—and you—handle the challenges.