As is true with many of the most desirable professions, success at writing requires a special confluence of talent, hard work, dedication, and sheer luck. As one of my favorite epic fantasy authors put it:

It’s not enough to be interested in a job where you can stay in your pajamas all day. You must have a burning desire to write, and a fervent love of both reading and writing. You need A LOT of patience, a fair amount of self-confidence, and thick skin.

And you really, really have to want it. Simply being charmed by the idea of writing novels for a living is hardly enough. Aspiring authors, it may be time to ask yourself a question: Do I want it badly enough? Let’s find out.

Forbes has a brief, entertaining article on why you shouldn’t be a writer. One reason: Breaking in as a published author is now more competitive than it has ever been. A number of factors have contributed to this:

If you saw the article on statistics of querying literary agents or my guest post with Brenda Drake about hard numbers from the #PitMad contest, you know just how competitive the field is at the first barrier to entry: finding an agent. 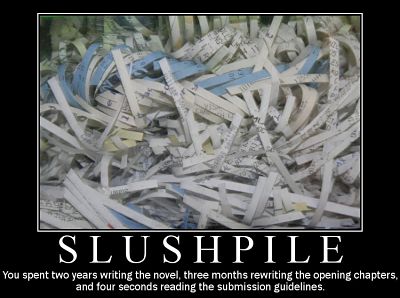 When I looked at QueryTracker for about 20 top agents who rep fantasy and sci-fi, the overall success rate for querying them was around 13%. Think that #PitMad or #SunVsSnow contests will give you a leg up? Probably not, because their success rates are also around 10-12%.

Last year I received about 4000 first novel queries and partials, out of which I read maybe 150 first novels in their entirety. Of those, I agreed to represent roughly eight. Even though I strongly believe in each and every one, I won’t be surprised if I place only four of the eight.”

Let’s say that you do manage to get an agent or publisher (or even just to e-publish yourself). You’ve managed to break in. Now for a dose of reality about the publishing industry.

If you’re not discouraged enough, see this article by a publisher on The 10 Awful Truths About Book Publishing.

Seriously, are you still here? You are a tenacious one. Maybe you do have what it takes. But this dogged dedication alone won’t get you there. There’s a popular misconception that if you work hard at it for a long time, you’re going to get published. But let me tell you a brief vignette. On QueryTracker, I began to notice a certain aspiring writer. This person has been querying for years, with multiple novel projects. Just about every single agent I looked up has received a query from him or her.

As far as I can tell, that user received nothing but rejections. Some are immediate, some are six months later, and some queries just don’t get a reply (a common practice for agencies these days; I understand it but don’t like it). You really only get one shot to query an agent for each project, and it is quite possible to run out of agents. They have a finite number, particularly for writers who seek out qualified agents from reputable agencies who represent the right book category.

You are a persistent reader, aren’t you? Since you’ve come this far, I’ll offer you a small reward. The counter-point to the Forbes article on why you shouldn’t be a writer is this one: Why You Should Be A Writer. One good reason: immortality.

Some of the factors influencing a writer’s career are not in his or her control: luck, timing, personal connections. Ultimately, however, the writing has to sell. Revising the work, and improving writing craft in general, are both essential. Not just to find an agent, but to have a book published that does well, so that you can sell publishers another one. To that end, here are some nice craft-related articles that I’ve come across in the past couple of weeks:

These are aimed at writers who are pretty far along already, but they’re useful to anyone interested in writing fiction that sells. For more tips and advice, see my resources for new authors page.