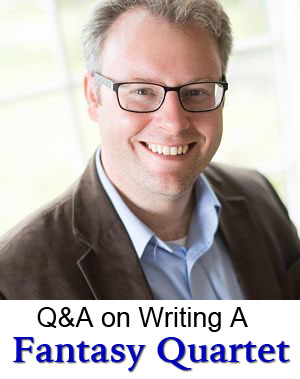 I’m pleased to host an interview with my friend Auston Habershaw, author of the Saga of the Redeemed, a 4-part fantasy series. The third installment, Dead But Once, is out today from Harper Voyager. Read on to learn how he broke in to publishing and how his experience changed when he landed a well-known literary agent.

1. So, give us your origin story. How long have you been writing, and how did you manage to break in?

AH: I’ve been writing since about 2000, but only seriously after I got my MFA in 2005. I spent a long time writing and rewriting early novels that really didn’t amount to very much and dithered about in short story work for a while. Things began to change in 2007 or so, when I started submitting things more regularly. I know this sounds ridiculous, but the key to breaking in was really to start sending stuff out often and constantly, both short fiction and novels.

I got a lot of rejections, but some very flattering personal rejections, some minor acceptances, and all of this built up my confidence. When Harper Voyager had an open call, I was ready to send in THE OLDEST TRICK, which was the fourth or fifth novel I’d written. After a long wait, they finally accepted it and gave me a 2 book deal. The rest is history.

2. You have one of the longer-running series with HV. How did that come to pass?

AH: Do I? I think the length of my series is somewhat deceptive, mostly because HV decided to split my first book in half–not two separate books, mind you, but to half-books which they marketed as two whole books. I don’t know why they did this, but as I didn’t have an agent and nobody lining up to give me a deal, I took what they offered. Later on, I explained to them how confusing this was, so they finally released THE OLDEST TRICK as one volume under its original title. People still go around referring to its halves as books 1 and 2, though, which I find endlessly frustrating as it confuses everybody.

So, for the record, I have a 3 book series now (which will end up being a 4 book series and be finished). Book 1 is THE OLDEST TRICK, Book 2 is NO GOOD DEED, Book 3 is DEAD BUT ONCE (out now!), and Book 4, currently slated to release in the fall, is THE FAR FAR BETTER THING. As for how it came to pass, when my contract ran out with the publication of NO GOOD DEED, I wanted to finish the series, but I didn’t have a deal. I got myself an agent and he negotiated an extension of the series out another 2 books.

3. What was getting an agent like? How did things change?

AH: For one thing, my agent was able to tell me things about my career that nobody else was willing to say: is this a profitable series? What is a good career move for me? What kinds of projects should I focus on? When do I know if I’m getting a good deal? These are all things that your friends, your fellow writers, and your editors can’t readily answer for you, but an agent is well situated to advise upon.

Additionally, it felt as though Harper was paying better attention to me. I know that they ultimately take care of all their authors, but let’s be honest–the guy with the top shelf agent gets his phone calls answered first, right? Right.

4. How has your agent’s input shaped what your short-term and long-term plans are?

AH: My agent will ask me for pitches for my next project ideas and he’ll give suggestions on which ones he thinks have the best earning potential at the moment. This I think can help me in picking which book to write next since I’m not just guessing randomly about what the market might be interested in. I have expert advice. He’s been very helpful in this way.

5. What are some of the challenges of maintaining a longer-running series in the era of modern publishing?

AH: The hardest balance to strike in a series, I think, is how to keep the old stuff (that everybody loved in the first book) while simultaneously keeping the story fresh. My main character is evolving as a person across these 3 (and eventually 4) books and, by necessity, the nature of his conflict is going to change. Also you need to keep raising the stakes – you can’t do the same thing over and over again if you plan on having characters evolve. So, everything in motion and changing, but that central nugget that attracted people in the first place needs to remain in place.

Finally, your cast of characters has a tendency to steadily expand and, since I’m doing a multiple POV narrative, you suddenly have all of these storylines to keep straight and to pace properly throughout the book. This book (DEAD BUT ONCE) was particularly challenging in this way. I had to do something like 6-7 drafts of this damned book just to keep everything humming. Nearly killed me, I swear.

6. How do you think of the story, now that it’s coming to an end? Does it feel different?

AH: I just sent off Book 4 to my editor last month, so even though Book 3 is not the end, it feels like the series is over for me. I guess the thing to say is that the magic is somewhat gone for me. I still love the characters, but I feel like I’ve worked this story for everything it’s worth and there just isn’t much else to do in Tyvian’s world (well, for the time being, at least). That old flash of delight I got when I was writing books 1, 2, 3 is worn away. It’s time for me to move on. I only hope lots of people love the story I’ve left behind.

7. Obviously, we will be watching your career with great interest. What are you hoping to do next?

AH: I’m going to be writing a time travel caper, believe it or not. It’s going to be a novelization of a short story I published in ChappyFiction’s TIME TRAVEL TALES a year or two ago. It should be a hell of a lot of fun–if extremely mind-bending. No idea if it will sell, but my agent and I are going to do our best. I’ll be sure to keep you posted, and thanks so much for letting me stop by!

Auston Habershaw writes fantasy and science fiction and has had stories published in Analog, The Magazine of Fantasy and Science Fiction, Galaxy’s Edge and other places. His epic fantasy novel series, The Saga of the Redeemed, is published by Harper Voyager and the third installment in the series, Dead But Once, releases on 4/17/18. He lives and works in Boston, MA and spends his days teaching composition and writing to college students.

About The Saga of the Redeemed

Tyvian Reldamar gets betrayed by his longtime partner and left for dead in a freezing river. To add insult to injury, his mysterious rescuer took it upon himself to affix Tyvian with an iron ring that prevents the wearer from any evildoing. 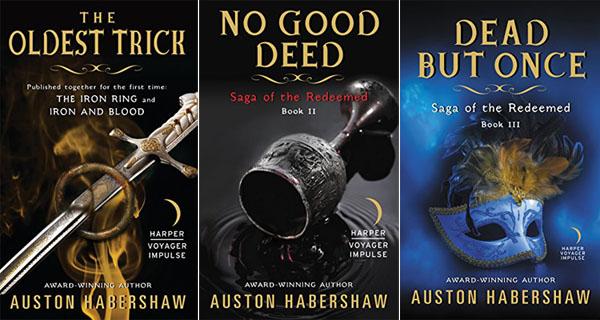