It’s a real pleasure for me to host an interview with my friend Michelle Hauck, whose book Steadfast was just published by Harper Voyager. It’s the third book in the Birth of Saints trilogy, which I highly recommend. She stopped by to answer some questions about writing a fantasy trilogy.

Why did you want Birth of Saints to be a trilogy?

I wanted Birth of Saints to be a trilogy for many reasons. I’m a fan of fantasy books and I prefer to read a series. They just let you get deeper into the world and the characters than a standalone book. In a certain way, a series is a mark of success and there’s such a historic tradition behind a trilogy. So many famous authors decided on trilogies—agreed that three was the perfect number of books. Who was I to disagree?

There was also the challenge of a series. A chance to stretch myself and see how I handle writing sequels and tying something even bigger together. Grudging was my fifth manuscript and I already knew I could produce a good single novel. Could I do the same for a series of related books? Now that Steadfast is out, I’ll get the chance to find out.

What’s your favorite long-running bit that you developed over the three books?

Ah! I love this question! It’s fun leaving reoccurring bits in books. In my case it’s all about socks! In the beginning of Grudging, Ramiro’s mother tweaks him about making sure to pack socks and change into dry socks since he’s going to a swamp. Then the witch girl Claire picks that up and it becomes a running thing through all the books. She repacks Ramiro’s socks when he tries to throw some away. Ramiro’s socks even provide common ground for Claire and his mother to gang up on Ramiro. And yep, mention of them are back in Steadfast.

I think books with serious plots and characters in crisis really need those characters to laugh once in a while. There has to be humor as a break in the tension. So keep an eye out for socks.

I also do a tribute to Jane Austen in all my books by inserting the word capricious somewhere. That’s a true Easter Egg if you can find it.

What was the hardest part of writing this as a trilogy?

I’d say the hardest part was the very last chapters of Steadfast after the big climactic ending. I had no problem with getting everything to fit into three books, but deciding how to completely wrap up the surviving characters and give them a good sendoff was the hard part. Weddings or funerals? Showcase a bit of the characters’ futures. You want to end at exactly the right spot to satisfy yourself and the reader and that’s hard to do.

Do you ever get sick of the characters?

That would be a yes, though it was more a feeling of being sick of writing and seeing that deadline approaching. For the first two books I easily beat my deadline, but I had to push myself on Steadfast because of some events in my life. I had to buckle down and not allow myself any breaks. Writing became a grind. Three years working on the same books can be hard. But now that the books are all done, I do miss the characters.

Now that you’ve written a trilogy, do you think you’ll try writing a standalone or a longer series?

I’m working on finishing up the first book of a series right now. It’s another epic fantasy but this one is even bigger. More characters. Bigger magic system. Wider scope and slower developing true plot. I’ve been working on this one on and off for several years, but it would be nice to do a one and done project next. A true standalone.

How do you feel about the fact that you’re done and moving on? Sad to be leaving these characters, or relieved to be doing something else? Maybe both?

At first the feeling was mostly relief. “Yay! I did it! It’s done!” Then of course you start to miss writing the characters. They’re like your children, only maybe more so because you crafted every aspect of them and can see more deeply inside of them than you can real people. You designed how they grew and you gave them their flaws in the first place. Sometimes they surprise their creator. And there’s a bit of you in all of them. I always have trouble letting go and moving on to new creations. Once you work on something else, though, it begins to get easier.

Will you ever return to the world of Birth of Saints?

I have some ideas for further books either with the same characters from Birth of Saints or in the same universe. And yes, it would be satisfying to return someday. I’d love to expand the story even more and go beyond the return of saints to see what they do next. Do they establish themselves or die back out? Honestly, that would very much depend how the sales for the beginning trilogy go. Publishing is a business and they’re not going to put more money into something nobody is reading.

So I try not to think too deeply about more books. Time will tell as they say. But in the meantime, I’ve got plenty to keep me moving toward new goals. 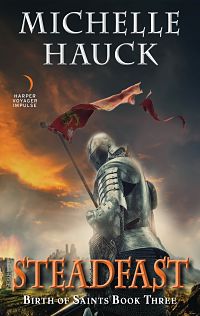 The final novel in Michelle Hauck’s Birth of Saints trilogy, Steadfast follows Grudging and Faithful in telling the fateful story of Claire and Ramiro and their battle against a god that hungers for blood.

When the Northerners invaded, the ciudades-estado knew they faced a powerful army. But what they didn’t expect was the deadly magic that was also brought to the desert: the white-robed priests with their lethal Diviners, and the evil god, Dal. Cities have burned, armies have been decimated, and entire populaces have been sacrificed in the Sun God’s name, and it looks as if nothing can prevent the devastation.

But there are still those with hope.

Claire, a Woman of the Song, has already brought considerable magic of her own to fight the Children of Dal, and Ramiro, a soldier who has forsaken his vows to Colina Hermosa’s cavalry in order to stand by her side, has killed and bled for their cause. Separated after the last battle, they move forward with the hope that the saints will hear their prayers, their families will be saved, and that they’ll see each other once more.

A stirring conclusion to the Birth of Saints series, Ramiro and Claire’s journey finds completion in a battle between evil and love.