One of the most common critiques that I’ve given to and received from other writers could be described in a single word: cut. Cut this backstory, cut that redundant phrase, cut the laundry-list description. For my part, I admit that I’m a discovery writer. Some of the prose that goes down onto the page will serve the sole purpose of helping me better define characters in my own head. Some of it might be world-building that I can do better elsewhere.

One of the most striking characteristics of professional-grade, publication-ready writing is that it’s very tight. Lean might be an even better word, because it implies that the author has trimmed the fat. Only the meat of the story remains, which usually makes it easier to read because no words are wasted. So where can writers do such trimming? Here are some common areas.

The arch-enemy of the fantasy/sci-fi author. We’re building entirely new worlds, and with that comes the powerful urge to dump a huge amount of information on the reader. This applies to other genres as well: every character and setting in the story will have a history. Some of that history might be crucial to the plot. The challenge is to weave this information into the manuscript so that readers don’t feel like they’re getting a history lesson. Because backstory, no matter how interesting, takes us out of the current action and slows the pace.

You’ve probably heard the adage that every word/sentence/paragraph should contribute to the characterization, setting, or plot. Ideally, it should contribute to more than one. In my critique group I’m often reading short stories, so I get to finish the entire piece in one go. I know how it begins. I know how it ends. Thus, when I see something in the story that doesn’t add to it in any way — a red herring, so to speak — it usually stands out.

I hate to point to television/movies as an example, but they are usually free of red herrings. The production costs and editing and time restrictions are probably some of the reasons why. When a character notices a gun on the mantlepiece, it’s because that gun is going to be important. Probably very soon. If it’s not important, then camera angles and dialogue are not wasted upon it.

Adverbs are simply the bane of some aspiring writers. Nothing throws me out of a story faster, and tells me that the writing just isn’t ready, than the over-use of adverbs. The worst is the old cliche of having the -ly word right after the dialogue tag:

“Get out of here!” he said angrily.

As critique partners and editors, we groan when we read something like this. It’s a shortcut, an amateur move. There are better ways to tell us that the character is angry. 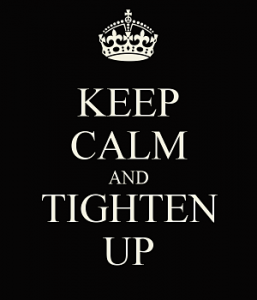 Not that more seasoned writers aren’t guilty of adverb use. I have to go back myself and remove these occasionally. Quickly is one of my favorites, and it shows. I guess my characters are always in a hurry. Probably because someone or something is trying to kill them.

Description is another area where many writers can do a lot of trimming. There are really two problems to tackle here:

This is truly an area where you can tighten a lot of your prose.

I love adjectives. Most writers probably do, too. They’re how we build our fictional worlds and enliven the pages. It’s easy to get carried away. When I’m revising, I take a hard look at adjectives to ensure that they’re strong, that they evoke the right image, and that they couldn’t be replaced by something else, like a metaphor.

I also look for and ruthlessly cut modifiers, like the word very. Either the modifier’s not necessary, or the adjective needs to change. Very big becomes huge.

I’m not a dialogue expert by any means. That said, we’ve all experienced dialogue that needs to be polished. Common problems include:

7. Thought and Point of View

Here is a small point — probably a pet peeve for me — that bears mentioning. Good writing rarely ha a lot of italicized thought in it. When you have first person or tight third person POV, the reader sees the world through the lens of that point-of-view character. There’s no need to specify that certain things are thoughts. For example:

Bill looked up at the new customer. She’s pretty, he thought.

If we have a tight third person POV, we don’t need the italics or attribution. We’re already seeing the world through Bill’s eyes. So this is all we need:

Bill looked up at the new customer. She was pretty.

It conveys the same information, but leverages the tight POV.

How Do You Tighten Prose?

If you have your own system for trimming during revision or tightening prose, please leave a comment or two!