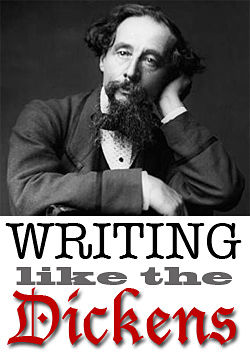 I’ve recently been reading more work by (and articles about) Charles Dickens. He is, by most accounts, the foremost author of the Victorian era. His 1843 novella A Christmas Carol remains an incredibly influential work, one that I never tire of watching on stage in December. His novel A Tale of Two Cities is the bestselling novel of all time, with 200 million copies sold. David Copperfield is his favorite novel, and semi-autographical to boot.

Even though the book was published over 160 years ago, it’s still fantastic. I didn’t remember this from A Christmas Carol — though in my defense, I was forced to read that in high school — but Dickens writes some of the most beautiful prose I’ve ever seen. I pulled some of my favorite examples to show you what it means to write like the Dickens.

My favorite passage of all is one where Dickens describes the churchyard outside the rookery where he (DC) lived as a child:

Later, nearly as poignant, he worries about what must have happened to the churchyard while he’s been away:

It pained me to think of the dear old place as altogether abandoned; of the weeds growing tall in the garden, and the fallen leaves lying thick and wet upon the paths.

This is only the tip of the Dickens iceberg. Here are some of the other areas where he excels.

I love the way that Dickens writes scenery. His attention to detail is simply masterful:

They had gone rustling away as if their little dresses were made of autumn-leaves: and they came rustling back, in like manner.

It seemed to be all old nooks and corners; and in every nook and corner there was some queer little table, or cupboard, or bookcase, or seat, or something or other, that made me think there was not such another good corner in the room; until I looked at the next one,

His gold watch-chain was so massive, that a fancy came across me, that he ought to have a sinewy golden arm, to draw it out with, like those which are put up over the goldbeaters’ shops.

The sea was crisp and clear; the sun was diffusing abundance of light, if not much warmth; and everything was fresh and lively.

Even rooms and buildings and other parts of scenery get the Dickens treatment:

An indescribable character of faded gentility that attached to the house I sought, and made it unlike all the other houses in the street.

It was a genteel old-fashioned house, very quiet and orderly.

Into this shop, which was low and small, and which was darkened rather than lighted by a little window, overhung with clothes,

All the angles and corners, and carvings and mouldings, and quaint little panes of glass, and quainter little windows, though as old as the hills, were as pure as any snow that ever fell upon the hills.

One of my favorite parts of Dickens’s writing is the manner in which he introduces characters. He goes beyond physical appearance to give us quirks and mannerisms. Every character is more memorable because of it:

He had not a pliant face, he had rather a stiff neck, rather a tight smooth head with short hair clinging to it at the sides, a soft way of speaking, with a peculiar habit of whispering the letter S so distinctly, that he seemed to use it oftener than any other man;

Miss Clarissa never moved her arms. She sometimes played tunes upon them with her fingers—minuets and marches I should think—but never moved them.

They both had little bright round twinkling eyes, by the way, which were like birds’ eyes. They were not unlike birds, altogether; having a sharp, brisk, sudden manner, and a little short, spruce way of adjusting themselves, like canaries.

He was a little light-haired gentleman, with undeniable boots, and the stiffest of white cravats and shirt-collars. He was buttoned up, mighty trim and tight, and must have taken a great deal of pains with his whiskers, which were accurately curled.

An ugly old man, with the lower part of his face all covered with a stubbly grey beard, rushed out of a dirty den behind it, and seized me by the hair of my head. He was a dreadful old man to look at, in a filthy flannel waistcoat, and smelling terribly 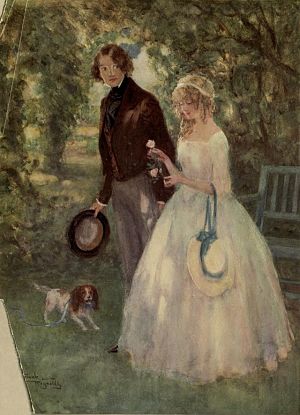 Perhaps most importantly, Dickens’s protagonist observes little details about other characters that hint at their motivations:

I detected him in the act of pocketing fragments of his bread and cheese; I have no doubt for the purpose of reviving us with those savings, when we should have reached an advanced stage of attenuation.

This was his little housekeeper, his daughter Agnes, Mr. Wickfield said. When I heard how he said it, and saw how he held her hand, I guessed what the one motive of his life was.

The expression of her face, as they both looked towards me, I felt to be very touching. There was such deep fondness for him, and gratitude to him for all his love and care, in her beautiful look; and there was such a fervent appeal to me to deal tenderly by him, even in my inmost thoughts, and to let no harsh construction find any place against him; she was, at once, so proud of him and devoted to him, yet so compassionate and sorry, and so reliant upon me to be so, too; that nothing she could have said would have expressed more to me, or moved me

Learning from the Classics

There’s much more that I can say about David Copperfield, but I’ll save that for another article. What about you? What classics have you read that simply wowed you at the prose level?