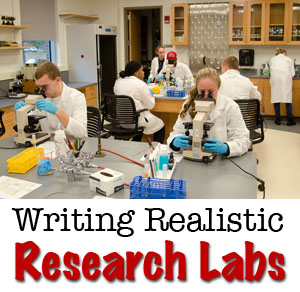 This article on writing realistic research labs is part of the Science in Sci-fi, Fact in Fantasy blog series. Each week, we tackle one of the scientific or technological concepts pervasive in sci-fi (space travel, genetic engineering, artificial intelligence, etc.) with input from an expert.

Jenny Ballif has a background in Molecular Biology but now works as Science Mom, an educational YouTuber and author of science activity books for kids. To date she has donated more than 500 hours teaching science as an unpaid volunteer in Nevada elementary schools (an effort you can support on Patreon). When she’s not teaching, you can find her on YouTube, Facebook, and Twitter.

Editor’s Note: Jenny also organized the Las Vegas Writer’s Conference where I taught a class on putting science in fiction in April 2018.

While having a character use phenylalanine instead of formalin in a DNA extraction will make the molecular biologist roll her eyes, the most important details in creating a real lab environment have nothing to do with the chemicals or equipment you use. A believable lab environment is created by

Let’s tackle each of these in detail.

History of the Principal Investigator

The single most important element in getting your lab culture and environment right is knowing the history of your Principal Investigator (PI). My experience and examples here relate to the academic setting, where the PI is also called the advisor, the mentor, and the major professor. But there is considerable overlap to the corporate world as well. When writing about your lead scientist, consider the following:

Where did the PI grow up, scientifically? Did they train in a well-funded lab or battlingforsurvival? Are they frugal and always concerned about where and how they’ll find the next grant, or are they set for several years with all the money they need? How are they as managers? Do they direct and oversee every detail in an obsessive way, dictating exactly what experiments will be run each day? Or do they give overarching goals and leave the specifics to their employees, allowing them a degree of freedom and ownership in their work? Did they go through any type of academic hazing? The personality and habits of the PI will permeate every aspect of lab culture.

My advisor for my master’s degree was Chinese. His first graduate degree was from a university in China, where he trained in a lab that was very short on funding and conserved absolutely everything. Even if our own funding had been overabundant, he wouldn’t have considered throwing away the PCR buffer after one use because–it can be used again! Why waste it? He was equally concerned with mentoring future scientists as gathering data for publication, and so he gave us a wide latitude with how we conducted our experiments. A virology lab that I also spent time in, by contrast, was a large and well-funded machine of productivity with a very hierarchal system of organization. The workers in this lab were shocked (nearly horrified) that I reused PCR buffer because it had never occurred to them that it could be reused. They had no flexibility in conducting experiments; each step was dictated by the PI, who liked to have a tighter hand on the data.

The Race to Publication

You’ve likely heard of the expression publish or perish, but you might not realize how literal a fact it is. My lab was trying to characterize a set of genes in the stress-induced flowering pathway in Arabidopsis thaliana. If that sounds obscure, realize that most research projects do. We wanted to know what triggered this type of flowering on a molecular level, and we were scrambling to find the answer before another lab did.

The daily fear and motivation looming over our lab was that we needed to publish first. As much as the scientific community claims to value duplicate research — after all, how can you really know if a result is correct if it’s not reproduced — the fact is that first results get published, and publications get grants. Duplicate results get neither.

Midway through my master’s degree, the dreaded event happened: we got scooped. Another lab published data that, while not identical to ours, was similar enough that we knew no major publication would accept the paper we were writing. A full year of research suddenly felt wasted. Insubstantial. I remember my advisor giving us the news, and how we all deflated and moped about the lab the next several hours, worried for him. Would he get tenure? Would the next grant come through? And worried for us too. Would we have a job next year, or the year after that?

And then, my lab partner was cleaning seeds and she let out a gasp and called me over to the bench. Low and behold, our mutant seeds were a different color than the wildtype. Oh, the joy! We ran down to our advisor’s office to share the news, and his face instantly lit up with the hugest smile I’d ever seen. All of our experiments and writing suddenly changed focus from flowering time to pigments in the seed coat. And we were able to publish an article.

Being on a sinking ship does something to people. With the right leader, it brings the group together and everyone is invested in doing all they can to save the ship. With the wrong leader, it gives a disheartening “We’re going to die so who cares” kind of effect, rather than one of invigoration and bonding. In academia, half the ships are sinking, all the time.

For your writing, you must know how your lab is doing in THE RACE. It will affect every aspect of how the lab is run, from whether the PI pulls all-nighters to whether the equipment is top-of-the-line or scrambled together and second hand. Remember that virology lab I mentioned earlier? The PI for that lab was studying retroviruses back in the late 70s. At the time, retroviruses were an obscure area of virology without much funding or interest from the general scientific community. Then AIDS turned out to be a retrovirus, and the entire scientific community wanted answers about how to combat this new epidemic. Figurtively speaking, the virology lab was holding a winning lottery ticket. The funding it received in the 1980s spurred it into a self-perpetuating cycle where funding beget more funding. Their equipment was always new and top-of-the-line because they were winning the race.

The Hot New Thing in Research

There is always a hot new thing in research, particularly in molecular biology. Your characters will know about it and talk about it. Labs who are strapped for funding will yearn for it, and labs who have funding a plenty will subtly flaunt how much Hot New Thing they have. Because it is the “Hot New Thing,” labs will sometimes use it even if it’s not a good fit. When I was in graduate school, the hot new thing was DNA microarray. I still remember the thrill of running our first microarray, and then the subsequent horror of looking at the massive amount of data it gave us and thinking, “What do we do now?” When I visited the well-funded virology lab, there were subtle displays of power in the way they talked about microarray. It wasn’t something they did consciously. But it was there all the same: a slight emphasis on the impressive number of microarrays they were able to run, little repetitive details dropped about the capacity and quality of their microarray equipment, a lingering discussion about their future plans for this still-new technique.

If you are writing realistic science fiction and want to use today’s Hot New Thing, it’s CRISPR. Go read about it and prepare to have your mind blown.

If you are writing speculative science fiction and want to invent a Hot New Thing, here are three characteristics to consider:

For a real life example where all three characteristics came together, consider Polymerase Chain Reaction (PCR). In the early 80s, one of the limiting factors in studying DNA was the miniscule size. When you run PCR, you take a specific DNA sequence and duplicate the heck out of it, so you have enough DNA to easily manipulate and measure. Not only was this process something new, but it also increased the ability to gather data and it was extremely cheap and easy to use. PCR perfectly fit the parameters for being a “Hot New Thing.” The inventor won a Nobel prize and the application spread across the globe, becoming the most widely used technique in molecular biology.

If you know the history of the PI, how the lab is doing in the Race, and what Hot New Thing is, you will do more than make your molecular biologist readers smile. You’ll create a lab that truly feels real.