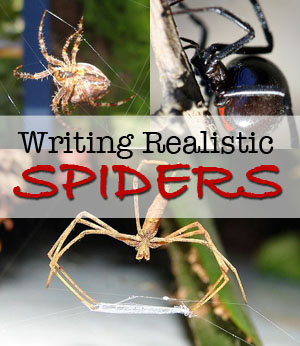 This article on writing spiders is part of the Science in Sci-fi, Fact in Fantasy blog series. Each week, we tackle one of the scientific or technological concepts pervasive in sci-fi (space travel, genetic engineering, artificial intelligence, etc.) with input from an expert.

Robinne Weiss is an entomologist, educator, and writer. Biology features prominently in many of her sci-fi and fantasy stories. Visit her on WordPress where she blogs about life in rural New Zealand, and where you’ll find links to her published stories. The biological sciences feature strongly in her stories, and insects sometimes play leading roles. You should follow her on Twitter.

Spiders have appeared in stories for thousands of years. They feature in the mythology of many cultures, and show up regularly in modern science fiction and fantasy. Fictional spiders are often the size of dogs or horses and usually portrayed as villains. Less commonly, they appear as sidekicks or supporting characters to the protagonist. But even life-size spiders are remarkable enough to take centre stage in fiction. Here are some fabulous facts about spiders to inspire your fictional arachnids.

One of the defining characteristics of spiders is the production of silk. Spiders use silk for capturing prey, for protecting themselves and their eggs, as a means of locomotion, and as a safety line. Contrary to popular belief, spider silk is not sticky; its stickiness comes from silk glue added after the silk is spun.

Spider silk outperforms any synthetic material humans can manufacture, and spiders have been spinning it for at least 305 million years. Strong, yet elastic, antimicrobial, and fully recyclable, spider silk is a marvel of evolution.

Spider silk’s remarkable properties have been recognized for thousands of years. Bemba people have used it as a membrane in flutes to create animal calls. Polynesians have used it for fishing line and nets. For over 200 years, it was used in telescopes, gun sights and other optical equipment to create fine grids and crosshairs. It has even been employed as antimicrobial bandages and sutures. 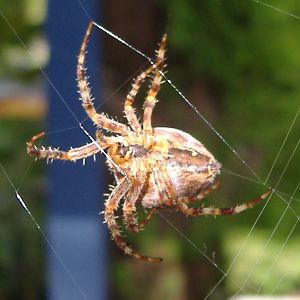 Spider silk is not actually one thing. Spiders typically have four or five different spinnerets that produce different silks with a variety of properties, based on their use. Across all spiders, there are nine different types of spinneret, and hundreds of different silks. Some are highly elastic; ‘Flag’ silk, used for the capture spiral of orb webs, can stretch to 300% of its original length, absorbing and dissipating the energy of flying prey. Other silk is more rigid, with shape memory that makes it an excellent structural component of webs and prevents a spider from twirling on its dragline as it descends from the ceiling.

Researchers have tried many ways to produce spider silk. The first attempts involved immobilizing spiders and reeling off the silk from their spinnerets. This is effective, but not efficient, as spiders can’t be mass-reared like silk worms (they eat each other). A spider silk cape was actually made this way in 2012. It required a team of eighty people, three years and over a million spiders–not exactly commercially viable. Researchers have explored biologically engineering other organisms to produce silk proteins that can then be ‘spun’ through artificial spinnerets. Bacteria, yeasts, plants, insects and even goats (who expressed the silk proteins in their milk) have been trialed as silk producers. None has been ideal, but research continues.

Even once we have the silk proteins, they must be carefully spun into fiber–something spiders are, again, much better at than we are. Synthetically produced spider silk is ten times thicker than the real stuff, and not as strong or stretchy. But never fear, where spiders beat us in technique, we surpass them in creativity. Researchers have succeeded in creating silk films and coatings, silk balls, and silk tubes. In the future, we could very well be wearing spider-silk clothing that resists sweat and dirt, paying for purchases with tear-resistant spider silk banknotes, and using electronics manufactured with spider silk optical fibers. Our police and military might be protected by spider silk bullet-proof vests, rappel down spider silk ropes, and float to the ground on spider silk parachutes.

All spiders are poisonous; it’s how they subdue their prey. Their venom is injected by their chelicerae (fangs), not by a stinger (sorry, Shelob). Fortunately for us, most spiders are too small to even get a good bite of human, and those that can usually deliver nothing more than a brief stinging sensation. Spider venom is primarily meant to subdue insects, not humans. Even the ‘deadly’ spiders rarely kill people.

However, for those who would like to make use of venomous spiders in fiction, here’s a little information about three of the more dangerous spiders you might employ to vex your characters. 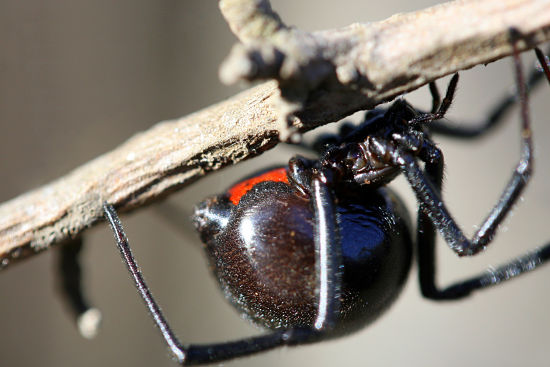 Black widow (Latrodectus mactans): The black widow and some other members of the genus Latrodectus have venom that is a mix of neurotoxins and tissue-digesting enzymes that ensure penetration of the venom. Despite their reputation, black widows are not aggressive, and may not even inject venom when they bite. Symptoms of a black widow bite include cramps, nausea, vomiting, headache and anxiety. Death is rare, and is usually the result of respiratory failure. Anti-venom is available for most of the dangerous species of Latrodectus.

Brown recluse (Loxosceles reclusa): The brown recluse and its close relatives have venom that is chemically distinct from black widow venom. It contains no neurotoxins, but rather causes gruesome cell death (known as necrotizing arachnidism) starting at the site of the bite. The brown recluse is too small to bite through clothing, but its habit of hiding away in shoes, pockets and bedding give it potential access to bare skin. There is no anti-venom available for brown recluse venom, but the only deaths associated with the spider have been of children under the age of seven. Death from brown recluse spiders is generally a result of the body’s immune response, not the actual venom itself.

Sydney funnel web (Atrax robustus): The bite of this large aggressive spider can be lethal in a matter of hours unless anti-venom is administered. Like the black widow, the funnel web spider’s venom contains neurotoxins causing extreme pain at the bite site, and respiratory and circulatory failure. An anti-venom was introduced in 1980, and there have been no known fatalities since.

One final note about venom that could prove useful in fiction: most spiders inject venom with a bite, but at least one species, the green lynx spider (Peucetia viridens) is able to also spray venom as a defensive response.

Spider venom isn’t all bad news for humans. Because spider venom targets insects, researchers hope to use it to help develop new insecticides to control pests.

Spiders have some remarkable abilities and behaviors that rarely appear in fiction, but are ripe for exploitation. Here are just a few.

Ballooning: Spiders don’t have wings, but it doesn’t mean they can’t fly. Young spiders of many species disperse by ballooning. The spider releases a strand of silk into the air. When the force of the wind on the silk is greater than the spider’s weight, the spider floats into the air and is carried by the wind to a new home.

Feet: Spider feet are wonderfully hairy. The hairs serve dual duty, helping the spider stick to some surfaces and not stick to others. The large surface area of the hairs allows spiders to climb the wall or ceiling, using van-der-Waals forces to stick to the surface. At the same time, the hairs’ configuration and a special chemical coating prevent the spider from sticking in its own web.

Another fun feature of spider feet is the presence of taste receptors on them. A brief touch of the feet is enough to tell a spider if a prey item is edible or not. This saves a lot of grief for the spider and its potential prey–a jumping spider pouncing on a foul-tasting ladybug will leap right off again without biting, and a web-building spider that snares a toxic butterfly in its web will cut the offending insect free.

Catching food: Most people are familiar with spiders that use sticky webs to catch food and with the active hunters like jumping spiders. But some spiders have unusual prey-capture methods. Bolas spiders hang head-down and throw sticky balls of silk at passing moths. They attract the moths (always males) by mimicking female moth pheromones. The net-casting spider doesn’t wait for an insect to blunder into its net, but drops it on unsuspecting prey walking below. 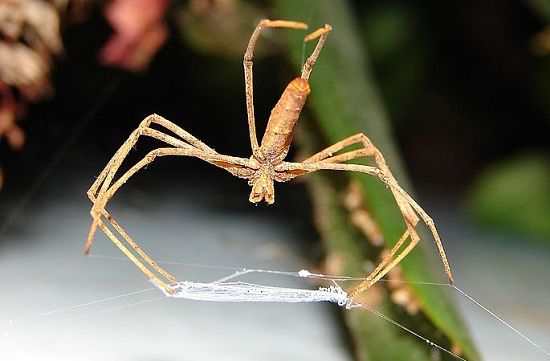 Aquatic spiders carry air with them like scuba divers and catch fish and tadpoles in underwater nets or simply by swimming them down. Trap-door spiders sit in their underground tunnels, waiting for the tell-tale vibrations of insects touching tripwires laid along the soil surface. Then they rush out to grab their prey.

Social life: Most spiders are solitary creatures, but some offer maternal care–protecting their eggs and young, sometimes even feeding young until they disperse. A few species have evolved more advanced social behavior, and may be found in colonies of up to 50,000 individuals. The spiders in these colonies cooperate in subduing prey, web building and maintenance, care of the young, and defense of the colony. Unlike the social ants, there are no queens–any female can reproduce–but there is division of labor within the colony, based largely on each spider’s personality. Sounds an awful lot like human societies.