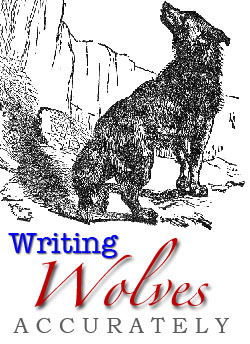 William Huggins is an environmentalist, writer, and soon-to-be PhD student studying Literature and Environmental Rhetoric. He also writes about green issues for the We Are Wildness blog. His short story “Grid Drop” recently appeared in the Hyperpowers anthology from Third Flatiron Publishing (edited by Bascomb James). He also has a story in the forthcoming Wolf Warriors III anthology from Thurston Howl Books.

Writing Fairly and Accurately About Wolves

Of all the animals used, abused, misused, misrepresented, mistreated, and turned into poor clichés of their actual selves over the course of literary history, few have been so wrongly written about as the wolf. Such poor representation has consequences in realms both literary and temporal. Consider that wolves have been exterminated from over 90% of their historic range. A systematic elimination of a species like that emerges from a cultural history built on poor storytelling. In other words, misrepresenting the wolf in story has led to blaming the species for more than its share of damage done beyond a small amount of economics, such as preying on cattle and sheep, which more often than not is shown to be the fault of domesticated dogs gone feral.

Putting an animal in a story means we, as writers and readers, must be honest about how that four-legged sentient being might behave in its real life. Or, as S. K. Robisch notes in Wolves and the Wolf Myth in North American Literature, “All of the components used in framing an argument are both proactively and retroactively affected by the argument, including any ecological components. This means when we put a wolf in a story, the story at that point must be responsible to the wolf.”

The Demonization of Wolves in Literature

From the earliest literatures the wolf has been demonized for its purely natural proclivities. Most of the world’s major religions have portrayed wolves in a particularly unkind light. In Tablet VI of The Epic of Gilgamesh, Ishtar returns a shepherd’s love for her by turning him into a wolf, the very bane of his profession. In the Kaushitaki Upanishad, Indra delivers Arunmukhas to wolves. The Christian Bible is replete with negative connotations for wolves, in line with Matthew 7:15’s “Beware of the false prophets, who come to you in sheep’s clothing but inwardly are ravenous wolves.” Not to be left out, the Koran’s sole mention of wolves, Chapter 12, includes Joseph’s death at the hand of wolves.

Childrens’ stories have been no less unkind. One exception might be Aesop’s Fables, which are almost evenly balanced, the pithy morals that close each fable not wholly making wolves evil, giving them some leniency for natural actions. In most childrens’ media wolves are a convenient foil for the heroes or heroines: think Red Riding Hood or the Three Little Pigs. These early impressions are important because children form biases at an early age.

Wolf Populations in the Western World

Medieval bestiaries often compared the wolf to the devil, hunting sheep with cunning and guile—which is, of course, true, at least in the case of the wolf. In Europe, Portugal, Spain and Italy have the only wolf packs considered sustainable at this writing, though wolves have slowly been migrating back into areas they once occupied hundreds of years ago. The British Isles are entirely devoid of wolves. Even great poets such as Chaucer borrowed from the bestiaries and noted wolves negatively in the Nun’s Priest’s Tale and the nearly unreadable Parson’s Tale.

The same medieval mind came across the Atlantic with early Euroamerican settlers. With better guns and ammunition than their European forebears, the settlers of America and Canada declared an unnecessary war on wolves that removed the species almost entirely from the entire North American continent—and continues today.

Wolves in Young Adult and SF/F

Recent young adult books, possibly because of better scientific understanding of wolves’ role in nature or a more forceful conservation movement, have turned the tide a bit: Kathryn Lasky’s Wolves of the Beyond and Michelle Paver’s Wolf Brother both do a fair job of showing wolves as they more naturally behave, especially in their devotion and dedication to their young, in which the entire pack plays a role.

Science fiction and fantasy have not been entirely accurate in representations of wolves, either. The Lord of the Rings takes a purely medievalist approach toward wolves, turning them into agents of the dark forces. Whitley Streiber, in his Wolfen, presents wolves as intelligent actors in their revenge strategy but the story goes a bit off the rails—Wolfen is one of those rare moments where the movie did a better job representing the wolves as they might naturally act than the book.

Plenty of other examples exist, perhaps most importantly the relationship of the Starks to their direwolves in Game of Thrones. Yet while an opportunity may have existed to show wolves in a more natural light, GOT’s direwolves function more as devoted pets, though Arya did release Nymeria—also, the possibility of warging with direwolves takes some of their potential wildness away. Even the ever-amazing C. J. Cherryh falls into cliché in Chernevog with the traditional Russian fable of wolves at the door, which has never been backed up by science.

One noteworthy exception exists in how wolves get represented in story, both orally and textually: indigenous writers. James Welch’s (Blackfoot) Fools Crow portrays wolves as they might exist in a wild setting, fictional or not. The lone wolf attack in the book comes from a rabid wolf, which is consistent with the scientific literature. Unlike the feral attackers in James Fenimore Cooper (see The Oak Opening) and Jack London (take your pick) or Nicholas Evans’ ridiculous The Loop, wolves do not like being around human beings very much and will avoid us if possible. Welch hits this fact perfectly.

Louise Erdrich (Anishinaabe) portrays wolves superbly in her Turtle Mountain cycle of novels, perhaps nowhere better than The Painted Drum where an Anishinaabe elder actually hears a nearby wolf speaking to him. The wolves leave him alone, as is generally their way, if they are healthy. Erdrich’s wolves also play with ravens, a connection seen throughout nature but rarely on the pages of fiction involving wolves. Writers of non-indigenous descent can learn a great deal from indigenous writers, not only in matters of technique but also in perceiving the world in a way to make not only story but connecting other nonhuman sentient beings. Perhaps this is because of the John Wayne-style Western film or Dances With Wolves—the indigenous peoples of our planet know what it is like to be misrepresented in literature and cinema.

Other Fair Treatments of Wolves

There are examples of wolves well done outside indigenous literatures, but they are few and far between. Mostly this issue evolved from culture: Euroamericans were not taught to respect the wolf and its role in nature as were indigenous peoples. The wolf was seen as either a harbinger of doom, a wild beast possessed of supernatural powers, or simply a pest that stole and killed stock. So it is that writers like Rick Bass (Where the Sea Used to Be), Renee Askins (Shadow Mountain), and Cormac McCarthy (The Crossing) have a lot more work to do to balance out negative portrayals of wolves.

In film it’s even worse. Try to sit down and watch the absurd The Grey with a wildlife biologist. Yet there may be some hope: BK Loren’s recent debut novel Theft brilliantly extrapolates the character of a wild wolf and may be a harbinger of things to come.

Onus on the Author

Authors, especially in the fields of science fiction and fantasy, where some writers literally inhabit and recreate the minds of alien beings, including animals, can and should do better. If one can write about aliens, one should be able to write about the other intelligences with which we share our own planet. Wolves predate humans by millions of years and have just as much right to be here as we do. In a world where science—especially wildlife biology and the emerging field of ethology—has shown us the ecological importance of wolves in properly managed wilderness systems (think of Yellowstone National Park since the reintroduction of wolves there in 1994), one would think that science would translate into better writing and storytelling.

Wolves deserve better, both on the ground and on the page. Writers—it’s time to be honest, and tell stories that are not only good, but true. As the wolf makes a comeback across its historic range, reviving itself and the landscapes that absolutely had to miss it, stories matter. If we are to reverse the destruction and mismanagement the human occupation of the planet has caused, rewriting our stories with respect to science and the rights of nonhuman animals would not be the worst place to start. In a world of ever-diminishing biodiversity, we need to recognize the power of our words: otiose writing, flawed legends, and no science took wolves to the brink of extinction—good writing and good science could keep them where they belong, right here, with us, on the page and in person.

Neither in our actions nor our literatures have we been responsible to the wolf. It is high time we should be.