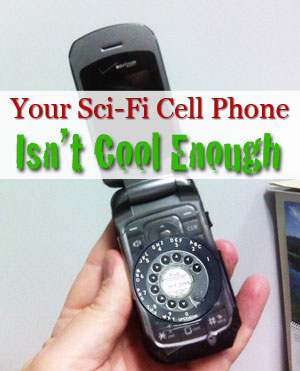 Effie Seiberg is a marketing consultant who works with a lot of tech startups in Silicon Valley, and has previously worked on Google’s mobile products and Android. In her spare time she writes science fiction and fantasy, with work appearing or upcoming in Lightspeed, Stupefying Stories, and Crossed Genres, among others. You can follow her on Twitter at Effie Seiberg on Twitter.

From the Star Trek communicator to Dick Tracy’s two-way wrist radio, science fiction has always imagined new types of portable communication devices. However, recent science fiction hasn’t pushed this so far. Go ahead – think of a science fictional story from the last 15 years that gives you an amazing idea for mobile computing. Chances are, real technology has already caught up to it. Usually, the Science in Sci-Fi series talks about science fictional assumptions that are too wild to work. Today, however, we’ll talk about the opposite: when your science-fictional cell phone isn’t cool enough.

Mobile technology has evolved in a number of new directions that have made crazy cool things possible today… which means that the communicators in distant sci-fi worlds hasn’t taken things far enough.

Because your phone is always connected, it does more than communicate with other machines. It can outsource to them. Massively distributed computational engines let you get difficult results on cell phones that don’t require the phone itself to be able to run the results. Google Translate and Siri both take in what you’re saying (which needs to programmatically take into account your accent, the sounds around you, your local slang, etc) and figure out your actual meaning. Doing this on a phone itself would be quite difficult, but because of the connectivity, your phone is as powerful as the most powerful computer cluster.

Your phone camera is smarter than you think. Because of the connectivity, your phone’s vision gets smarter not only with facial recognition (which is improving at a dramatic pace – already you can unlock your phone with a smile or the pattern of blood vessels in your eye on some platforms) but also at recognizing anything else, and doing interesting things with that information.

CamioCam combines computer vision and machine learning to make a smarter home security camera, and all it takes is your old phone, propped up and connected to wifi, to do it. The processing on the back end helps figure out which types of motion aren’t interesting (moving branches in the breeze shouldn’t trigger a motion alert) and it’s improving on its ability to give specific insights. For example, in their interface you can search for “brown” to see if the UPS truck has arrived today.

MIT has released software that detects tiny changes in color in any video – even from a phone camera – that can be used to detect heart rate. Skin gets ever-so-slightly redder when blood flows underneath it. With just a propped up phone camera, and this tech running behind it, you can monitor an infant or patient’s health without plugging them into a heart rate monitor. Far more comfortable for them!

Phones today have GPSs, accelerometers, compasses, and more. Beyond just navigating you around (and figuring out the shortest routes, even within encased structures like football stadiums), this yields a lot of messy motion data. Zendrive combines all that data to figure out when the bearer of the phone is in a car accident (as distinct from, say, someone just dropping their phone), and the tech is then used by other companies to automatically call a loved one, an ambulance, or a tow truck.

Between phones knowing your location, motion, and a fair portion of your activity, they can already adapt to their situations. Motorola already has a phone setting that automatically reads texts and emails out loud when it detects that the person is in a moving car, so that they don’t text and drive (yes, they let you opt-out overall, or if you specify that you’re not the driver). Google’s Android will pull up different suggestions (weather, events it thinks you’ll like, etc) depending on where you are and what you’ve recently been searching for.

And, while Motorola and Proteus Digital Health have developed the “authentication vitamin” pill, which turns on when it hits your gastric juices, and broadcasts out an authentication code for your phone or other device, it’s easy to imagine this expanding to include turning on different things depending on the state of your stomach.

Your Sci-Fi Phone Needs to Step It Up

If all these cool things are happening today, your futuristic phone had better be much cooler. With the combination of the Internet of Things, where more items are connected, plus constant connectivity, phones almost act more like the terminals of yore than a standalone gadget. They can access any piece of info, from anywhere, and with any amount of processing needed. Plus, their sensors make them much much smarter about what’s going on around them for things that aren’t already connected. So with that said, Go-Go-Gadget-Kickass-Future-Phone!