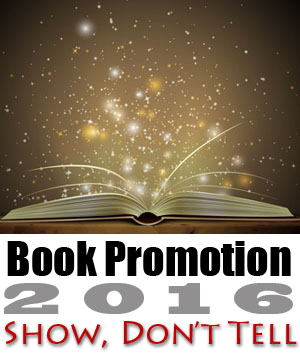 January 2016 is here at last, and it’s going to be a big month. Exactly one year ago, I wrote on how to promote your book in 2015 with five suggestions authors could try (none of which involved tweeting BUY MY BOOK). In the months since, I’ve written a few posts on author & book promotion, from author website basics to the all-important task of building your author mailing list. I even tried to make my favorite social media network more enjoyable with my 10 Twitter commandments for authors.

It’s one thing to to offer advice on how to build an author platform and market your books when you don’t have one of your own. Later this month, I’ll have a chance to do something that authors are often told to attempt when writing prose: show, don’t tell. That’s because my debut novel, The Rogue Retrieval, comes out on January 19th.

Book promotion has changed considerably in the past year. Here are five things I’m hoping will make the difference.

It takes an entire team of people to publish a book — an agent, an editor, copyeditors, and artists, for starters — and the same is true for promoting one. Few things are more powerful than a small, dedicated group of fans and friends who will go the extra mile. That’s part of why I’m hoping to recruit some people for The Rogue Division, my top-secret team of literary allies.

A small team of people comes in handy when it comes to leaving reviews, voting for Goodreads lists, and other things the author can’t do himself. They can use their own networks to provide a signal boost for messages from the author, too. It costs them nothing other than a little bit of time.

What do they get in return? It varies, but often includes free books, swag, inside information about the author’s new projects, and a chance to influence their direction (e.g. as a beta reader). It’s also an opportunity to get to know the author personally, and to see the entire process from his or her position.

Some authors believe it’s the publisher’s job to get advance review copies into the hands of book reviewers. In the case of high-profile publications like Locus Magazine, that’s certainly true. However, there are hundreds of book bloggers, reviewers, and booktubers who may not be on the contact list for all major publishers. At my last count, I’d written to 54 book reviewers to ask them if they’d like an ARC of The Rogue Retrieval for a possible review. Twelve of them agreed to receive a copy, and I’ll be thrilled if I get half that number of reviews.

The unfortunate reality is that there are many, many more books than book reviewers could ever possibly handle, and a reviewer who becomes somewhat established will never want for free books. Even reviewers who only consider traditionally published titles (and this does seem to be the majority of reviewer policies) are inundated with requests. All that the author can do is be polite, professional, and to the point when reaching out.

There’s an active debate in author circles about the effectiveness of guest posts as a book promotion tool. In my opinion, the main issue is reach. Most of the generous bloggers who’d be willing to host you are already part of your circle, so the audiences overlap significantly. The ideal venues are the blogs of well-known authors in your genre. If you don’t know any personally, however, it’s hard to find a way in.

Fortunately, there are at least a few SF/F authors — like John Scalzi, Chuck Wendig, and Mary Robinette Kowal — who share their platforms with other authors. Somehow I have persuaded the latter two let me make an appearance in a couple of weeks. I’ve also arranged for guest posts at Pub Hub and a lovely book blog called On Starships and Dragon Wings.

A book’s reviews on Amazon — and to a lesser extent, on other sites like Goodreads and Barnes & Noble — are just so important for sales. The challenge is that they’re harder and harder to get. Reviews and ratings take time for already-busy readers, and Amazon’s review rules make it ever more difficult for the most passionate fans of an author to leave him or her reviews.

Unfortunately, as critical as they are, reviews are largely beyond the power of an author to change. In my case, I’ve borrowed a strategy from indie authors, and included a page in the “back matter” of The Rogue Retrieval asking readers to leave a review. I’ve also written a little guide on how to write a book review for the uninitiated. It’s a general how-to guide that I hope will get some readers to review a book for the first time. And it includes some links in case they want to review mine.

Writing groups — both in-person and online — are a critical part of writing for many of us. They provide critiques, community, and even emotional support as we make our way through the treacherous road for publication. Your fellow authors are your brothers and sisters in arms. Few people are more willing to support your book launch when the time comes. In some ways, this victory is theirs, too. They’re part of the reason that you got here.

I’m so lucky to have found a few groups who have helped me along the way, like my WashU fiction classmates, the PitchWars community, and the Codex Writers. When my book launches in a couple of weeks, I know they’ll come out swinging for me, just as I know I’ll do the same for them when their books come out.

Promoting a book, just like writing one and trying to have it published, is hard to do. It’s even harder if you try to go it alone. One of the most-repeated bits of advice I’ve heard from established authors is to celebrate every milestone. The release of your new book into the world is one of those. It means you’ve come all the way from a blank page to a complete work of art. No bad review or lackluster sales figures can take that away. So celebrate the moment that your book is published. I know I will.

I have no idea if the things I’ve planned will move the needle at all for The Rogue Retrieval. Most of the factors that seem likely to influence success — writing a decent book, having it professionally edited, and getting a kick-ass cover — are out of my hands now. I’m cautiously optimistic about is chances, but I’m an optimist by nature. More than anything, I’m lucky and grateful to have gotten this far.