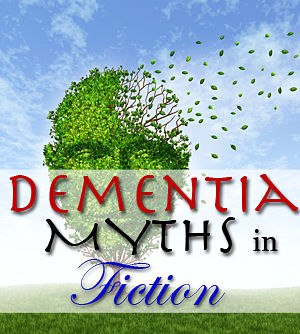 About the expert:Anne M. Lipton, M.D., Ph.D. (@AnneLipton) is a behavioral neurologist who specializes in dementia. Her latest work on this subject is The Common Sense Guide to Dementia for Clinicians and Caregivers. She has also written an adult mystery and several picture books.

Myths about Dementia in Fiction

In my first guest post on Science in Fiction, I discussed Misconceptions about Memory in Fiction. In this post, I’d like to drill down and discuss a common—and commonly misunderstood—memory disorder: Dementia.

*For more information on cognition, please see my prior post: Misconceptions about Memory in Fiction).

Colloquially, a wag may crack that someone is “getting senile” when the commentator means that the person in question is having memory problems. Although it may be meant as a joke, I have seen and heard the term misused in print, online, and other media, as well as in conversation, when the intent is quite serious. It behooves all of us, including, and perhaps especially, doctors and writers, to understand and respect the power of words: Don’t confuse senility with dementia.

Senility simply refers to “old age.” Hence, “senile dementia” = “old-age” dementia. Medical professionals usually define “old age” to be  > 65 years-old. In our youth-obsessed society, even carmakers will change the name of a vehicle to avoid saying “old.” It may not be great branding, but  “old” is a term that can be used with respect. However, “senile” has clearly fallen out of favor (probably due to its mistaken association with dementia) both in and out of medicine. “Geriatric” is the currently preferred clinical term to refer to the elderly. And “elderly” itself is now much more widely-used than “senile,” when referring to mature, seasoned people of a certain age.

Age is certainly one of the most significant risk factors in developing dementia. But memory problems interfering with daily function are not a part of normal aging. So, someone who is “senile” does not necessarily have dementia. On the other hand, young people (i.e., less than 65 years-old) may develop dementia. So, someone who has dementia isn’t necessarily “senile.”

The use of “demented” as a synonym for “insane” or psychotic is another colloquial misuse of a clinical term (or terms) to avoid. Although the term “insanity” persists in some cases (e.g., “Not guilt by reason of insanity), “mental illness” is now more widely used and preferred to “insanity,” with its connotations of locking people up in an “insane asylum.”  Furthermore, a person may have a disease. But a person is not the disease. That’s why it’s better to say that a person has “mental illness” than to say that a person is “insane.” Of course, in fiction, it may be more colorful to speak of a person being driven “insane.” But consider your words.

To be respectful—and to avoid confusion, it may likewise be best to say that a person “has a dementia or dementing illness,” rather than saying a person is “demented.” Don’t let the disease define a person. At least not in real life. In fiction, however, illness may provide a rich vein of internal goal, obstacle, and stakes.

Doctors and writers alike should strive for specificity. Dementia may be considered to be one type of mental illness, but only one type. Dementia is a general term. Mental illness is even more so.

When people use “demented” and “insane” interchangeably, they may mean psychosis, or a mental break with reality, which may include hallucinations (sensory misperceptions), delusions (false beliefs), and agitation. People with dementia may develop psychosis, which may be related to their dementia or for another reason (e.g., infection, medications, etc.). But “dementia” is distinct from “psychosis” and vice versa. A person with dementia may be competent to make decisions on his/her own behalf, as opposed to someone who is psychotic (i.e., has lost touch with reality and experiences hallucinations and/or delusions. See Misconceptions about Memory in Fiction for more on these topics.)

In Harry Potter and the Prisoner of Azkaban, J.K. Rowling coined the term “dementors” for demonic tormentors who suck memories (and other cognitive abilities) from someone’s brain. Although the name “dementor” may, ahem, conjure up the term “dementia,” the sudden and precipitous amnesia and other cognitive loss that they inflict is not typical of the insidious onset and gradual decline seen in dementia.

That’s just one reader’s interpretation. The association may just be in the mind of this beholder. She’s J.K. Rowling; she can call them whatever she wants. But it’s a good reminder of the power of words.

Myth #3 Alzheimer’s and dementia are the same thing.

Alzheimer’s disease is a common and well-known form of dementia, but there are many other types, including (but not limited to) Vascular dementia, Mixed dementia (not any old-mixture but specifically Alzheimer’s disease + Vascular dementia), Dementia with Lewy bodies/Parkinson’s disease dementia, and Frontotemporal dementia. Each type of dementia differs in terms of signs and symptoms (particularly in onset), disease course and duration, and other associated factors.

Myth #5: Dementia is a fast-moving process.

Dementia usually results in gradual worsening of cognition, behavior, and functioning over a period of years. Even a “rapidly progressive dementia” occurs over some months or years. Insidious onset and gradual decline typify dementia.

Myth #6 Dementia is not treatable.

Most dementias are treatable, just not curable or reversible. Current medications treat day-to-day symptoms and may slow cognitive, behavioral, and functional decline.

Some dementias are considered as potentially reversible (i.e., possibly curable). These are far and few between in real life, but may make for a rich plot point in fiction. The mnemonic (memory prompt) that doctors sometimes use to remember these is (what else?) DEMENTIA:

Normal pressure hydrocephalus or tumor or other “space-occupying” brain lesion**

Anemia (vitamin B12 or folate deficiency)

**One of the main reasons we do a brain scan as part of an evaluation for dementia is to look for hydrocephalus or a tumor or space-occupying brain lesion. But more on neuroimaging next time.