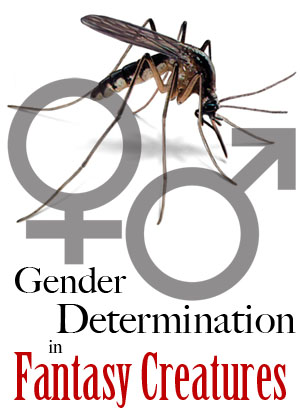 Robinne Weiss is an entomologist, educator, and writer. Biology features prominently in many of her sci-fi and fantasy stories. Visit her on WordPress where she blogs about life in rural New Zealand, and where you’ll find links to her published stories. The biological sciences feature strongly in her stories, and insects sometimes play leading roles. You should follow her on Twitter.

Hoards of mutant insects, alien creatures, dragons, unicorns, and all the other weird and wonderful creatures that appear in science fiction and fantasy have to reproduce. Otherwise they wouldn’t exist, right? It’s tempting to ignore the reproduction of our fantastical creatures, though—they hatch, or land on Earth, or whatever, and then the excitement starts.

But the world of reproductive biology is full of juicy facts, ripe for exploitation by science fiction and fantasy. Take the matter of gender, for instance. For many animals, gender is a simple matter determined by genetics, but in other animals, gender is far more complex.

Some species of reptile have temperature-determined genders. The incubation temperature of the egg determines whether the embryo develops as female or male. Unlike warm-blooded birds that sit on their eggs to keep them warm, reptiles are largely at the mercy of their environment when it comes to incubation. They generally lay their eggs in clutches, buried in sand or soil in a sunny location, and hope for the best.

In many turtles, eggs incubated at lower temperatures develop as males, and those incubated at higher temperatures become females. In American alligators, extreme temperatures (high or low) produce females, and moderate ones produce males. With this system of gender determination, entire clutches of eggs will emerge as one gender or the other.

Some fish are also affected by incubation temperature, with extreme temperatures leading to more males, though studies suggest that fish also have a genetic component to gender determination, and temperature only affects gender at extreme conditions.

Marie Brennan used this idea beautifully in Voyage of the Basilisk: a Memoir by Lady Trent. In the story, a nation tries to breed dragons to defend their borders, but the dragons all develop as small males, useless for defense. The intrepid naturalist, Lady Trent, conjectures it is because incubation conditions were wrong for the production of the much larger females.

Some fish and snails actually switch genders throughout their lives. The switches may be triggered by social or environmental cues. Clown anemonefish (think Nemo) all begin life as males. In a group, only the two largest fish are sexually mature—one female and one male. If the group’s dominant female dies, the dominant male becomes female and takes her place.

Indo-Pacific cleaner wrasses do it the opposite, with groups of one male and many smaller females. When the male dies, the largest female becomes male and takes his place.

Parrotfish and hawkfish can begin life as either gender, and switch throughout their lives.

Imagine how Finding Nemo could have been wildly different with this little bit of biology included, considering that Nemo’s mother is killed and he and his father are the only two clownfish left…

He’s Half the Woman She Is

In many bees, wasps and ants, males develop from unfertilized eggs (haploid—with only genes from the mother), and females from fertilized eggs (diploid—with a set of genes from each parent). Usually the adult female controls the process—choosing when to produce males and when to produce females by controlling the release of sperm she has stored from mating. Sometimes, as in some scale insects, the males originate from fertilized eggs in which the father’s genome is destroyed during development, becoming haploid.

Invasion of the Gender Snatchers

The strangest (and perhaps most interesting for fiction) gender determination oddity is that found in many insects and other arthropods.

A wide variety of insects produce only females, or produce males only rarely. There are insect species for which no males have ever been found—females simply clone themselves or lay unfertilized eggs.

The elimination of the male gender appears to be caused almost entirely by strains of bacteria in the genus Wolbachia. Wolbachia infects arthropods and some nematodes, and is considered a reproductive parasite. The relationships between Wolbachia and its hosts range from parasitic to mutualistic, but almost always involve a modification of genders and reproduction.

Infected females pass Wolbachia to their offspring, but males don’t, so it is in the bacteria’s interest to eliminate males. Wolbachia accomplishes this in one of several ways (different among Wolbachia strains and hosts): by killing males before maturity, by causing males to develop as females, by giving female hosts the ability to reproduce parthenogenically (without males), or by causing cytoplasmic incompatibility between infected males and uninfected females, so that only infected females can reproduce.

Whether obligate or not, Wolbachia gives many infected insects a reproductive advantage over uninfected ones. It also often gives the insect a survival advantage, providing the host protection against pathogens and, in some cases, improved nutrient uptake.

So, infection by a bacteria produces all-female races of super-bugs…now there’s some cool science fiction!

Of course, this is just animals. Gender determination becomes even more weird and wonderful when it comes to other organisms. Fungi, for instance, have genetically-based gender determination, but may have thousands of genders (mating types, they’re called). It can make it hard for a fungus to find a compatible mate, so many have evolved the ability to change some of their cells to a compatible mating type and mate with themselves.

And a side note…

Because Wolbachia does more than just change insects’ gender, it’s presence, and its many and varied strains raise interesting opportunities for us as humans. Mosquitoes that transmit diseases like malaria, chikungunya, west Nile virus, dengue, and zika are less susceptible to infection by these pathogens when they are infected with certain strains of Wolbachia. Scientists have been studying the feasibility of using Wolbachia in the fight against arthropod-borne diseases, both to decrease their ability to carry the diseases, and also as a way to limit reproduction (by infecting males with incompatible strains of Wolbachia, thus preventing viable offspring).

Quinn A. (2007) How is the gender of some reptiles determined by temperature? Scientific American. June 25, 2007. Accessed at: http://www.scientificamerican.com/article/experts-temperature-sex-determination-reptiles/ on 26 September 2016.