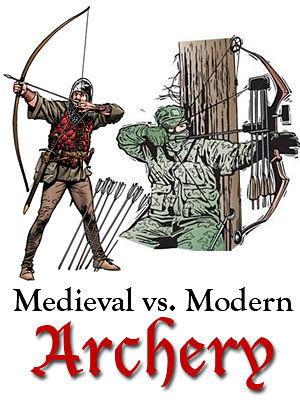 This article is part of the Science in Sci-fi, Fact in Fantasy blog series. Each week, we ask an expert to tackle some aspect of fantasy writing (cultures, weapons, horses, etc.) or one of the scientific / technological concepts pervasive in sci-fi.

I’m serving as the expert today, in honor of something very special that happened this week: the opening of bowhunting season in Missouri. I’ve hunted with bow and arrow for 17 years. Every September, I disappear into the woods for (seemingly) weeks at a time in pursuit of two formidable animals: the elusive whitetail deer, and the wily wild turkey.

The bow and arrow is one of the oldest projectile weapons in history, dating back as far as 30,000 years B.C.E. It’s been around forever — particularly for hunting — but the bow’s use in warfare rose to prominence during the Middle Ages. I’m talking about the English longbow, also called the Welsh longbow. Its first recorded use in Britain was around 633 AD, when an arrow shot by a Welsh longbow killed Edwin, the son of the king of Northumberland.

Advantages of the Longbow

The crossbow was the main rival for the longbow in the Middle Ages, and popular because it required minimal training. Yet it could only deliver 1-2 bolts per minute and had an effective range of 20-40 yards, whereas a longbow could deliver 6 arrows per minute at a range of 300-400 yards. They were also relatively easy to make; modern bowyers can build a longbow in about 10-20 hours.

In the Middle Ages, the longbow saw use in various civil wars for which the period was rather famous. They also played a key role in several battles of the Hundred Years’ War. One of these was the Battle of Crécy, which took place in northern France on August 26, 1346. On one side were the exhausted French forces, whose crossbowmen had just endured a long march in the rain that damaged many of their weapons. On the other side were the English, who’d chosen the field of battle, rested, and kept their bowstrings dry. The French tried a crossbow volley which had no effect.

How did the English respond? Froissart, the renowned French chronicler, tells it this way:

Translation: the English archers uncovered their bows, which they had kept in their case during the rain (hey, I knew that French degree would come in handy someday). And you don’t need Froissart to know what happened next. There’s even a nice illustration of it from this timely bit of art: 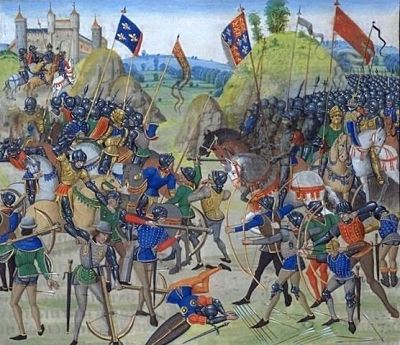 Wet crossbows (left) were no match for the Welsh longbow (right), which could shoot 400 yards and deliver 5-6 arrows per minute. The French forces were soon routed and took thousands of casualties.

An interesting question that comes up, both in history and in fantasy novels, is whether longbows could put an arrow through armor or chain mail. A bodkin arrow, whose tip has a stronger, narrower point (essentially a squared, spear-like shape), was probably developed for this purpose. Compared to the broadhead, which had a wider cutting radius, bodkins were more likely to punch through armored enemies.

Though it’s a matter of debate among historians, many believe a bodkin would have difficulty penetrating solid armor, especially high-quality plate armor covered with a gambeson (a sort of cloth worn on the outside to protect against projectiles). Against non-mithril chain mail, however, a longbow with bodkin arrows was likely very deadly. Especially at close range (<50 yards).

Wreck of the Mary Rose 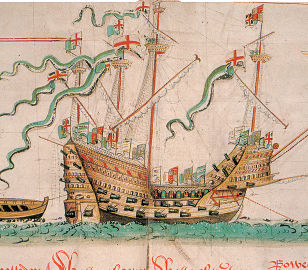 Very few longbows from antiquity survive. Unlike swords, armor, shields, and other weapons, bows wore out and were replaced instead of handed down from one generation to the next. Much of what we know about English longbows comes from the Mary Rose, a warship from the navy of King Henry VIII that sank in 1545.

When rediscovered in the 1970’s, the wreck was like a Tudor-era time capsule. Among the countless historical artifacts were about 175 longbows and 4,000 arrows, the analysis of which rewrote our understanding of English longbows in the Middle Ages. It’s what I use for the comparison below.

Firearms eventually replaced the bow and arrow in warfare, but archery remains popular today for sport and recreation. I know more about the bowhunting side, where bows, arrows, and related equipment are modern marvels. According to the U.S. Fish and Wildlife Service, there are ~3 million bowhunters in the United States, and they spend $935 million each year on bows, arrows, and other archery equipment. Most hunters prefer the compound bow, for reasons I’ll explain below. How does their modern equipment compare to that of King Henry VIII’s archers? Let’s find out.

Here I’ll compare some of the important features of longbows from the Mary Rose to a typical modern compound bow used for hunting.

One thing you’ll notice is that the longbow was considerably larger (6 feet) and had much higher draw weights. My own bow has a draw weight of 62 pounds; at times, I’ve had trouble drawing it. There’s also the fact that hunters in North America don’t really need more than a 60 pound draw for any game they might encounter. As I note above, most of us prefer a “flat-shooting” compound and practice accuracy at 20-40 yards.

Other kinds of non-compound bows have evolved over history. The cross-section of an English longbow would be a “D” shape: flat on the side that faced the archer, and rounded on the other side. A flatbow is a different design with flat, relatively wide limbs that have a rectangular cross-section. It’s superior to the longbow because it the flat surface spreads the stress more evenly. It generally takes longer to construct a flatbow than a longbow, but a wider variety of timbers — such as elm, maple, and hickory — can be used.

The recurve bow is yet another design, but one in which the tips of the bow curve away from the archer when strung. This also means that the string rests against the limb of the bow at the top and bottom. A recurve stores more energy and delivers it more efficiently than straight bows, which means that they can be shorter in size, but with the same punch. Horse bows, which had to be shorter so that they could be shot by horseback, were often recurves for this reason.

Bow and Arrow Myths in Fiction

Because I like to debunk common myths/mistakes in this series, I thought I’d touch on a few things we see — especially in the fantasy genre — that are not really accurate.

1. Learning to shoot a bow is easy

Longbows in particular were difficult to master. King Henry III made the following declration in 1363 to encourage all Englishmen to practice with the bow.

“Whereas the people of our realm, rich and poor alike, were accustomed formerly in their games to practise archery – whence by God’s help, it is well known that high honour and profit came to our realm, and no small advantage to ourselves in our warlike enterprises… that every man in the same country, if he be able-bodied, shall, upon holidays, make use, in his games, of bows and arrows… and so learn and practise archery.”

An arrow shot from a bow falls with gravity, and the less powerful the bow, the greater the effect. With a modern compound (60 pound draw), I’d estimate the arrow drops 6-10 inches every ten yards.

With historical bows, this also meant that archers “aimed up” to account for the rainbow-shaped flight path. If you don’t believe me, go watch a longbow or recurve shooter at an archery range sometime. It’s scary.

Sorry, Katniss, but shooting a longbow that could kill a man at distance, or punch through armor, required considerable upper body strength. We’re talking 80 to 120 pounds of force. I myself probably couldn’t draw one. I certainly couldn’t shoot it repeatedly. The skeletons of English longbowmen showed visible adaptations (enlarged left arms and bone spurs on the right fingers) from prolonged longbow use.

4. Ten arrows a minute is reasonable

Surviving documents and historical accounts of English longbowmen suggest they shot, at most, around 6 arrows per minute. It would be wasteful to do otherwise, and most archers were supplied with 60-70 arrows before a battle. Unless your character is an elf named Legolas, it’s wise to put a cap on the rate and number of arrows he/she can shoot. 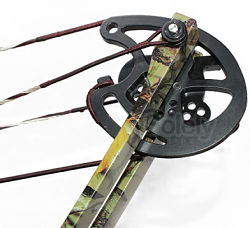 The reason that compound bows are so popular is the draw curve: the strength required to pull back an and hold an arrow. With a longbow, that draw curve is essentially linear: it takes more strength to hold a bow the farther you draw it back. That’s why some of those Katniss-like moments are a little unrealistic. Longbows are hardest to hold when you’re fully drawn, so there’s not a lot of time for aiming and releasing. A strong man would have trouble holding a longbow at full draw for more than a second.

The compound bow’s design offers a different draw curve: it’s hard at first, but as the pulleys (the gear-shaped things at each tip) turn over, a compound requires less strength to draw. Holding an arrow at full draw is much easier. I’ll routinely hold at full draw for 5-10 seconds to take steady aim at the target. 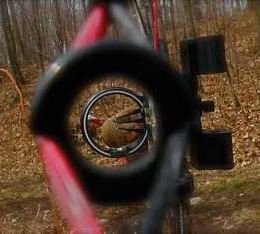 Modern bows also have something called a peep sight: a small donut-shaped plastic ring, located in the string (near where you nock the arrow). At full draw, you look through the hole at sighting pins on the bow itself. You set the pins at different heights for different ranges (20, 30, and 40 yards). Thus, the peep sight helps with both centering and distance.

Modern bows have other luxuries, too: stabilizers to make them easier to hold, shock absorbers to preserve the limbs, fancy arrow rests, and limb savers. Most hunters now use carbon arrows, which are narrow and strong, but provide the flex required to counter the archer’s paradox. They might use field points, fixed-blade broadheads, mechanical broadheads, or even blunted arrowheads for small game.

Despite all of the technological advances, the fundamentals of the bow and arrow haven’t changed in thousands of years. Draw, aim, shoot. It’s challenging to hunt with a bow instead of a rifle, but millions of us do anyway. I like the challenge. And when I carry my bow into the woods, it’s like taking thousands of years of history with me.

If you liked this article, please share it with some of your writing friends on Twitter (or your social media platform of choice). Here are some ready-made tweets: