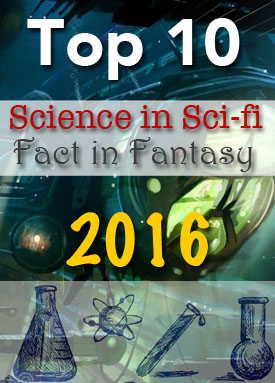 The end of 2016 is finally here, and I know that many of us will be happy to see it go. I thought I’d share some positive stats from this year, as well as the ten most-viewed posts for my Science in Sci-fi, Fact in Fantasy blog series.

I wrote 55 blog posts this year, which is slightly fewer than 2015 but still about one a week on average. I took off the month of November, which was one reason for the reduced productivity. And The Rogue Retrieval came out this year, which took a lot of my time away.

At 208,000 page views, I’m still a drop in the bucket compared to John Scalzi’s 5.2 million page views, but up about 1% over last year. There were three visible traffic peaks; the latter two coinciding with #SFFpit events in June and December.

The earliest peak, in February, coincided with the post Bipolar Disorder: What Writers Should Know, by Jon Peeples. I posted it to the /r/writing subreddit, where it received 185 upvotes and 34 comments. The article had over 1,500 views over the course of three days, making it one of my most popular for the year.

All told, my website had 121,000 unique visitors. According to Google Analytics, here are some demographics of the audience:

My main takeaway from this is that I should pay more attention to my site’s appearance on mobile devices, since that’s what nearly half of visitors are using. 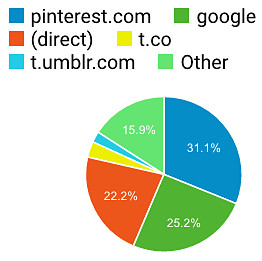 Where Visitors Came From

These statistics can be a little dodgy, since many users’ privacy settings prevent Google from seeing where they came from. Notably, my top referrer was Pinterest, which brought 31% of visitors. I attribute this to two principal factors:

The other major sources of traffic were Google Search (25%) and direct referral (22%, a mixed bag of visits via RSS feeds, author blogs, forums, websites, etc.). Twitter is a distant fourth, at about 5% of my referrals. Facebook was less than 2%. I rarely do much on FB outside of a few private groups, so I’m not surprised by that.

Here are the most popular posts in my Science in Sci-fi, Fact in Fantasy blog series by number of pageviews.

I notice at least a couple of possible trends here. First, I should ask Hannah Emery to come back and do another post, because her articles are super popular. Second, two of my top ten articles are related to the portrayal of mental illness in fiction, which is clearly an important topic in this day and age. I’ll reach out to those contributors as well.

Have a wonderful new year, friends. May you always find water and shade.