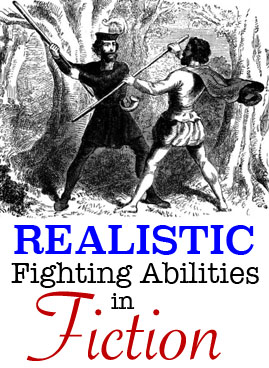 Eric Primm is an engineer for Boeing and has spent the past nine years making sure the wings don’t fall off various aircraft. He is the club leader of St Louis Counterpoint Martial Arts and is testing for his black belt in both Counterpoint Tactical System and Cacoy Doce Pares this fall. He writes fiction about philosophers and non-fiction about martial arts. You can find his musings on martial arts on the STL Counterpoint blog.

Everyone knows that a trained fighter will beat an untrained one. Skill, of course, trumps no skill. But what really constitutes fighting skills? Depending on which martial philosophy to which a person subscribes, skill means different things. The martial arts are a generic term, equivalent in specificity to a term such as vehicle. Just as there are many types of vehicles with different purposes, there are many martial arts with varied goals, training methods, and fight objectives. Some are for self defense, others are for sport, and still others are a method of maintaining a tradition. But certain skills, such as cardiovascular conditioning, distance control, and the so-called muscle memory, are common across disciplines. Arts may emphasize or explore each of these differently, but without these skills, the martial artist is in trouble. 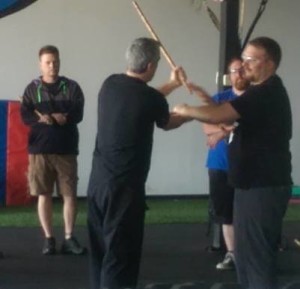 Characters with a martial background would understand the need for these skills. An author needs to know that a character who fights is required to practice those skills. Without training, it would take luck, surprise, or, most likely, both for an unskilled character to beat a skilled character. Like writing skills, martial skills require maintenance, and fighters understand this. If a moderate or highly skilled fighter is important to a story, then that fighter has put in hours upon hours learning and practicing to maintain three aspects of fighting: endurance, range, and muscle memory.

The Truth About Fighting

Fighting is exhausting. It is mentally, physically, and emotionally draining in a way that no other experience can be. It is a three dimensional, dynamic puzzle with a side of pain and the risk of injury. Fighting is also a transformative process that brings about a Zen state of mind. It is scary, exhilarating, fun, and frustrating. It can be short bursts of strength and speed that drag out over several minutes. It can also be a grueling, grind that wears everyone down.

Depending the situation, fighting can be the best experience of someone’s life, the worst, and/or the stupidest. Each time the struggle is new and different. Each of these factors exhaust the fighter. In fact, when skills are equal, the fighter who fatigues faster will lose without luck or third party intervention. Sport fighters dedicate as much – if not more – time to staying in peak condition, including exercise, diet, and mental conditioning.

Fatigue is such an important factor in a fight that strategies are built around making an opponent exhausted first. In striking sports, punches and kick to the body, leaning on your opponent, pushing and pulling are all strategies to wear down an opponent. In wrestling or grappling, the fighter makes her opponent carry her weight. Covering the airways and constricting the diaphragm are excellent strategies as well. A fighter understands that the only way to beat an opponent with more skill is to wear that person down until she makes a mistake. Or the fighter has to cheat, which means weapons or allies.

Characters who are accomplished fighters must be in shape and should, more importantly, understand energy management during a fight. The longer the encounter, the more energy required. In Words of Radiance, Brandon Sanderson has Adolin Kholin duel for shards (magical swords or armor), and Adolin ‘s strategy is to drain his enemy of stormlight. It is a brilliant modification of a fatiguing fight strategy. 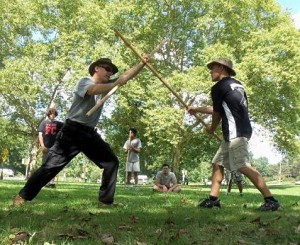 Distance is another trait that fighters learn. Martial artists refer to fighting distance as range, and the easiest way to understand this in terms of weapons. A gun allows for more distance than a staff, a staff more distance than sword, a sword more than a kick, a kick more than a punch, a punch more than an elbow, an elbow more than a head butt, and a head butt more than a bite. Each weapon is useful in more than one range. In the single stick fighting portion of Filipino martial arts (FMA), there are four ranges: long (largo), medium (medio), short (corto), and stick-grappling. These ranges affect targeting, footwork, use of the empty hand, blocking, trapping, kicking, joint manipulation, and which portion of the stick is used.

This even applies to fighting without weapons. A long range punch, such as the jab, can strike an opponent from farther away than a hook punch to the body. A character that has a martial background will understand that distance dictates the options available during the fight. Changing range can expand or contract the options available to a fighter. The movie John Wick demonstrates this well. Even though he has a gun, he utilizes judo throws in his fighting. The title character understands that even with a gun, grappling options are available.

Fighters will have a sense of distance from sparring and from training. They’ll learn techniques in all ranges, but they’ll have a preference for a particular range. Certain fighters like to grapple, others like to kick, and still others like to punch. Fighters will work to get into or to maintain the range that is their preference. In Mixed Martial Arts (MMA) competitions, fighters who like to strike have to understand defensive grappling to maintain the range they like to fight in. Grapplers have to move through the striking range into their preferred range.

These preferences are dictated by what each character enjoys and believes to be their strong suit. A character who has fast feet, is tall, and has good flexibility might enjoy keeping his opponent away from him with long kicks, straight punches, and footwork. A shorter, muscular character might prefer to get close to her opponent and wrestle or use knees and elbows. Physical traits don’t always dictate the characters’ preferences, though. Mindset, personality, temperament usually do.

What does the fighter enjoy, what does the fighter think are her strengths, and what is her goal during the fight? When building characters, the author must give thought to building his preferences from his personality. Does the fighter enjoy the knockout more than say a submission? Is the warrior uncomfortable with killing up close and prefers using the long sword as opposed to the dagger? Will your character stab someone in the back or need a so-called fair fight to ease her conscience?

Martial training is geared towards instilling technique into muscle memory. For this article, muscle memory is defined as ‘without conscious effort,’ meaning that an action is performed without having to think through every step. When a child is learning to tie his shoes, he thinks of every step until he’s practiced enough that the task is automatic.

Martial arts skills are the same. The action in a fight occurs so fast that if a character has to think about blocking, she’s already been hit. Muscle memory in the martial arts, however, goes beyond this. Like with the child learning to tie his shoes, an adult will see what the child is doing and recognize the next step. The same happens in fighting. A martial artist can more easily counter an opponent with less practice in a skill.

In the early Ultimate Fighting Championship, a grappler, Royce Gracie, beat a number of skilled opponents because he possessed knowledge and ability in an area they did not. Because he had spent so much time training, when his opponent moved, Royce’s muscle memory recognized what was happening and allowed him to stay one step ahead of his opponent. In FMA single stick fighting, a master recognizes a strike from the angle that it enters on and can counter an opponent at the beginning of an attack.

Among fighters of equal skill, this muscle memory ability can be used in chess-like strategies to set traps for opponents. One fighter will figure out that each time she swings her stick horizontally, her opponent tries a vertical block that is braced with the empty hand. So, the fighter fakes to draw the block and punches her opponent in the face with her empty hand.

The author’s job is building a character who has muscle memory in certain skills. Every martial artist is human; thus, every martial artist has flaws, which the correct opponent can exploit. These flaws are built from the fighters preferences. Just as boxers believe they can dance around and knock anyone out or like wrestlers who believe they can throw anyone and grind them into the ground, a character needs strengths that are exploitable based in their years and years of training. The overconfident boxer can be wrestled to the ground, and the overconfident wrestler can be boxed into unconsciousness. The character needs skills that are automatic and second nature. But to be human, the character must possess skills that can be overcome by a smart opponent capable of exploiting that hard-earned muscle memory.

By having better conditioning, being able to be in the right spot to apply the right technique, and executing said technique without thought, the fighter’s skill is evident. These are the universal skills that fighters need, and any character that is built as a fighter needs to understand these. Any character who isn’t a trained fighter will fail in at least one of these areas. Drama is built from the failure, and suspense is built by application of the principles. By having these skills evolve from the character’s tendencies and traits, the author earns believability. These skills also add depth to the character.

A sickly character who raises his sword to fight a strongman speaks of bravery. The woman who slips a punch into a double leg takedown as a defense against attack is an agile thinker under pressure. The thief who stabs a mark in the back for a few gold pieces is a practical murderer. The soldier who shoots an unarmed villager kills too easily and probably has mental problems. Each of these examples are spoken in the language of physical conditioning, range, and muscle memory, and each speak of character. By showing the reader how her character fights, the author engages in the most hallowed of writing advice. She is showing, not telling.