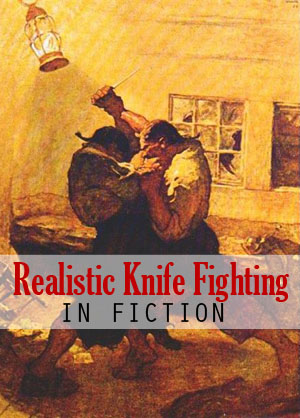 This article on realistic knife fighting is part of the Science in Sci-fi, Fact in Fantasy blog series. Each week, we tackle one of the scientific or technological concepts pervasive in sci-fi (space travel, genetic engineering, artificial intelligence, etc.) with input from an expert.

Eric Primm is an engineer for Boeing and has spent the past nine years making sure the wings don’t fall off various aircraft. He is the club leader of St. Louis Counterpoint Martial Arts and is a black belt in both Counterpoint Tactical System and Cacoy Doce Pares. He writes fiction about philosophers and non-fiction about martial arts.

You can find his musings on martial arts and writing on the Primm Life blog. You should also follow him on Twitter.

“It did not last long. It is only in the movies that knife fighters stab and miss and slash and miss and tussle over several city blocks.” ― James Jones, From Here to Eternity

Bladed combat is a commonplace of fantasy fiction with most stories focusing on swords, and, to a lesser extent, axes, and spears. However, knife fighting is rare in stories, but in reality, knife attacks are a common form of violence. They are used in robberies, muggings, gang fights, drunken brawls, and self-defense.

Around the world, many martial arts claim to study knife fighting. However, a quick perusal of the YouTubes gives videos filled with a lot of bad, bad advice. For example, no one will ever kick a knife out of an attacker’s hand without possessing super powers; it just won’t happen. In modern America, no one will lunge like they have to punch a dagger through plate armor. Real world knife attacks are short, brutal, and scary. As a martial artist, I’ve researched and studied so you don’t have to, and here are six realities of a knife attack.

First, there is no guaranteed knife defense. In knife fights, the outcome always favors the blade. Skill and knowledge only increase a person’s odds of surviving but never overwhelmingly in favor of the defender. A saying attributed to Filipino martial artist Edgar Sulite describes it best:

If I have more skill than my opponent, he dies. If my opponent is more skilled, I die. If we’re of equal skill, we both die.

Note the severity of the language. In knife fighting, win and lose are meaningless terms. The only outcomes that matter are survive or not. Second, if running away isn’t an immediate option, the fighters will get cut. With body positioning and movement smart knife fighters try to limit where on their body the cut happens, but even those skills present other targets for wounding. The higher the skill level of the people in the fight, the higher the chances of being cut.

The Knife Versus Gun Debate

Finally, when I give seminars about knife defense, one person always dismisses me by saying, “All you need is a gun.” This is self-defense’s Dunning-Kruger equivalent. Due to the body’s built in reaction times, there exist a range of distances where the knife beats gun every time. Most people know of the flight or fight response, but no one considers the time between observation and reaction necessary to initiate fight or flight. Neither response is instantaneous, and a smart fighter will take advantage of that gap.

Police and military training, by design, aim to minimize the gap between observation and action, but it will never disappear. Or, more simply, guns are not the get-out-of-knife-fight-free cards that people believe. Search YouTube for Tueller drills as confirmation.

These drills are incorrectly referred to as the twenty-one foot rule, but no rule was ever proposed, and due to the biased nature of the test – participants knew to be ready – it’s debated that twenty-one feet is too short.

I relate the hammer grip to a fencing style of fighting. The blade moves like a swashbuckler’s sword, fast and attacking from many angles, with the attacker needing to be close enough to strike but not so close as to lose maneuverability.

For the icepick grip, the style becomes close like two wrestlers in a clinch. Think of the icepick grip as a grappling hook that is used to dig into the body. When the blade has a single edge, the direction the edge faces matters in icepick grip because an attacker can pull with the edge. How a person grips the knife tells the victim nothing about that person’s abilities, but it can indicate which tactics to use against the person, provided there’s enough time and light to glimpse the grip.

For self-defense purposes, a person must learn both grips to know a complete system of defense. Neither grip is superior to the other; in fact, the different attributes of a chosen grip can be negated by an opponent skilled in the other grip. As with all other fighting, training, knowledge, fitness, and mental capacity to do violence are the only attributes that matter. How a knife is held often comes down to how it is picked up or drawn.

In movies, the attackers wave their blades back and forth in front of their targets. This is a poor tactical decision when the goal is to assault someone. If the victim can see the knife, the attacker likely doesn’t want to hurt them. When the blade is visible, it is meant to scare the target into compliance, e.g. a threat of violence more than a promise.

(To be clear, I recommend complying and not testing to see if the attacker will back up the threat with action.)

Knives are small and easy to hide, which is what makes them dangerous. Anyone could be carrying one or more blades at any time. If someone decides to use their blade, they will hide it until the actual attack itself. Why let the target see the knife and defend against it? Because attacking an unprepared target increases the chances of success, the knife will remain hidden until the very last moment.

Allowing the victim to see the knife also allows the victim time to draw their own weapon in defense. As any tactician throughout history says, the surprise attack improves the odds of success.

Because of their compact nature, knives are close range weapons. An attacker needs to be close to the target to do damage. Distance management becomes key to achieving an objective. The closer the attacker is, the higher the chance of damage. With more space between them, the target has better chances to escape. Sure, the attacker could throw the blade, but once the weapon leaves the person’s hand, it loses maneuverability and is easier to avoid.

This is why hiding the blade is important; an attacker can approach a target without hinting at intentions. If distance is the key, then it follows that jogging is the best thing a person can do for their own self-defense. For the victim, safety means putting as much space between themselves and the attacker, or in simpler terms, safety is found in running away. Jim Butcher in the Dresden Files makes a point about how much Harry runs and why. This is self-defense thinking done right.

Since knives are small weapons, they are more agile than swords, axes, and blunt weapons. Knives slice and stab at a high rate from many angles of attack. One general rule of fighting is that the defender must be successful one hundred percent of the time, and the attacker needs to succeed only once. Because the knife moves faster, the increased rate of attack makes a breach of a person’s defenses very likely.

Any time the defender fails to stop the attack, they will be cut, which with loss of blood, increased lubrication from the blood, and increased panic at being cut their ability to defend will degrade quickly. Knife attacks are often short and fierce because the knife moves so fast. In many attacks, the victim is stabbed before they know they’re in a fight. To see how brutal knife fighting can be check out The Hunted with Tommy Lee Jones and Benecio del Toro.

(For the sake of the story, the fight is drawn out to heighten the drama, but it remains an excellent display of the horrors of knife fighting).

Slash wounds from knives look horrific and result in ugly scars, but stab wounds cause more damage. Slashes, while bloody and large, tend to be superficial with only the skin that is damaged. Stab wounds, however, go deep into the body and are more likely to injure an internal organ. In terms of visual horror, stab wounds don’t look like much, but in terms of survivability they are scarier. Due to the nature of a blade, slashing versus stabbing depends more on the movement than the fighting style, and often one can be reversed right into the other. Any slash can become a stab, and any stab can become a slash. With the speed and versatility of the blade, both will be present during knife attacks.

As the six points show, knife fighting can be a technical art, and I didn’t get into any of the fun mechanics. This isn’t meant to be a be-all, end-all article; I’ve left out a lot of information. But these points will help a writer think differently about knives. In urban settings, regardless of time period, knives and daggers represent hidden dangers that seed every day environments with the potential for violence.

The clarifications described above are meant to open possibilities for the author, not be a definitive argument for realistic knife fighting. Instead, they present ways for the author to add danger into a scene. By their very nature of being a useful tool, knives have persisted through human history and will continue to persist well into the future. Whether in Sword & Sorcery, Urban Fantasy, or Space Opera, the knife exists. How they are used in the story is limited only by the author’s imagination.

Editor’s note: If you enjoyed this article, check out Eric’s earlier post on realistic fighting abilities in fiction.