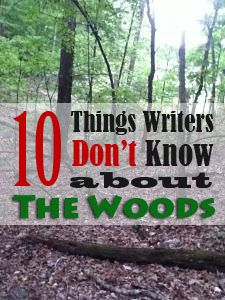 It’s hard to put a number on how many books I’ve read that feature characters in the woods. Sometimes they’re fleeing, sometimes chasing, sometimes just looking for something to eat.

As someone who spends a lot of time in the woods, I should tell you that most authors get it wrong. Here are ten realities about the woods that every writer should know.

1. A forest has more than just trees

When writing about the woods, many authors focus on just one thing: the type of trees and how many there are. In a mature deciduous forest, there are typically at least four layers of plants:

All of this must be negotiated by someone on the ground. Which leads me to my next point.

Nothing throws me out of a book faster than a character running (or worse, galloping) full-tilt through a dense forest. If you only had the big tree trunks to worry about, you’d be fine. It’s the understory that’s the problem: dense, shoulder high thickets are almost impossible to traverse quickly. And if it’s a patch of evergreens, forget it. They’re hard to even walk through, because they can grow so closely together with branches that hang almost to the ground.

Running or riding a horse at top speed is also pretty much begging for a broken ankle. Holes, stumps, and fallen logs all lurk beneath a deceptively placid layer of fallen leaves. I admit that there’s a scene in The Rogue Retrieval where the main character rides a horse at full speed through the woods, but it’s on a clear trail (and he’s kind of being chased by a dragon). 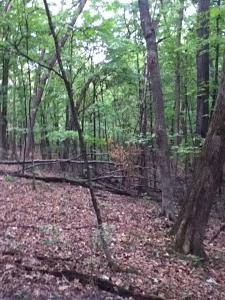 Having stalked many animals in the woods, I can tell you that most of them are pretty quiet. They have to be, in order to survive. The loudest thing in the woods by far is a human being. Most hunters sneak into the woods well before the animals are moving about, and they find a place to sit very, very still. We don’t walk around, because it’s nearly impossible to sneak up on game.

What this means for any kind of a forest chase is that a person running through the woods would be easy to hear coming from a long way off, and easy to follow, too. There’s one time when a person can move through the forest both quietly and at a decent speed: when the ground is wet, either from heavy dew or recent rainfall. You still have to avoid snapping twigs and kicking branches, but otherwise you can find stealth. 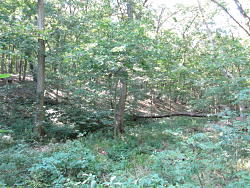 The Woods in Summer

The visibility in a forest depends on a few factors, the most important of which is the season. Visibility is poorest in late spring and summer. Because of the undergrowth and the greenery, you usually won’t be able to see more than 20 or 30 yards in any direction. Also, someone on the ground usually can’t see the sky, the clouds, or the stars at night because of the top canopy. So yeah, that whole navigating-by-the-stars thing won’t happen in a dense forest. 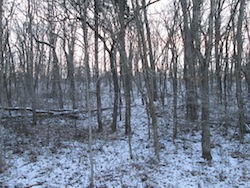 Visibility is strikingly different after the leaves fall. The woods are a very different place, then. You might be able to see 50 or 100 yards, depending on the terrain. Snow on the ground makes a difference, too: the contrast makes animals and people stand out at a distance, especially when they’re moving.

Ironically, better visibility doesn’t always help the hunter, because it works just as well for the animals.

5. Getting lost is easy 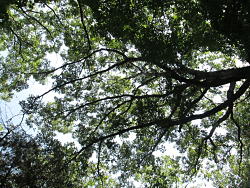 It is very, very easy to become disoriented in the forest. Here are some of the reasons:

Even when I’m hunting an area I know well, I never enter the woods without my GPS and an extra set of batteries for it.

Humans (as well as predators and many bird species) have excellent perceptive vision, meaning that they can easily spot movement. 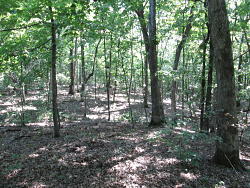 Thus, the best way for anyone or anything to hide in the forest is to keep absolutely still. Movement, even swatting a mosquito (which are voracious in the forest, by the way), will give you away.

Wearing the right colors helps, too. Blue, red, and bright orange are colors you won’t often see in the woods, so they stand out like neon signs. A hunter in full camouflage, sitting still with his back to something that breaks up his outline (like a wide tree) is virtually invisible. That same hunter walking back to the truck is easy to spot.

If I were fleeing someone in the woods, I’d go to ground as quickly as possible and lay still.

7. The truth about tracking

The concept of “tracking people” in the woods in fantasy literature has always bothered me. You know, the old “Ah-ha! This twig is snapped here, so they went in this direction.” Most of the time, unless someone is in view, you’ll have little idea which way they went. The ground is hard and strewn with fallen leaves. Twenty guys might have walked through the same stretch of woods half an hour before me, and I wouldn’t be able to tell. 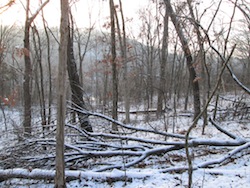 Following someone on a trail will help, though, since it may have been worn down to mud that can hold a footprint. Other things that would help:

I have tracked wounded deer through the woods on a few occasions. When fleeing danger, animals (including humans) have certain tendencies. They prefer to flee downhill, and via the path of least resistance. They run largely in one direction. And they avoid open areas whenever possible.

Often when I’m sitting in the woods, there’s not much to look at (even with my hunting binoculars), so I use my ears instead. Sound usually travels farther than I can see. There are many familiar noises: crows, woodpeckers, crickets, that sort of thing. And let me tell you, I have heard some strange noises. One that I hear somewhat often is a squeaky-squeaky kind of creaking noise; I suspect it’s some kind of bird. Other noises are less common, yet more puzzling.

Here’s a good example. Once while hunting on a wooded island along the river, I heard this whooshing sound. It would happen once every 15 or 20 minutes. It almost sounded like a bellows, but I was 5 miles from any civilization. Then I came to an open patch of sky, and I saw what it was: a flock of small birds, flying in unison. I think they were teal, and they flew like little stunt planes. The whooshing sound happened when they all made a sharp turn at the same time. I wouldn’t have guessed that in a hundred years.

Other strange noises I’ve heard remain mysteries. Once I heard something that sounded like a baby crying in long, plaintive wails. That one still haunts me.

9. The woods are beautiful, if you’re into that sort of thing

Despite all the bugs and tripping hazards and briar patches (and poison ivy!), the woods tend to be a peaceful place. I might spend eight hours without seeing another person. Away from the rush and noise of modern life. Time passes more slowly. Twilight seems to last longer. The tranquility of the deep woods, with the sigh of wind through the treetops, is something we outdoorsmen (and outdoorswomen) cherish.

10. There are exceptions to challenges of the woods

Obviously, none of these problems (stealth, visibility, and getting lost) apply to elvenkind. Or the Dúnedain.

This article is part of Science in Sci-fi, Fact in Fantasy, a blog series in which we tackle scientific, historical, and other concepts of speculative fiction writing with help from experts in the field. Join my e-mail list to receive notice when new articles are posted.

Please consider tweeting one or more of these tips you’ve learned about the woods from an actual woodsman!